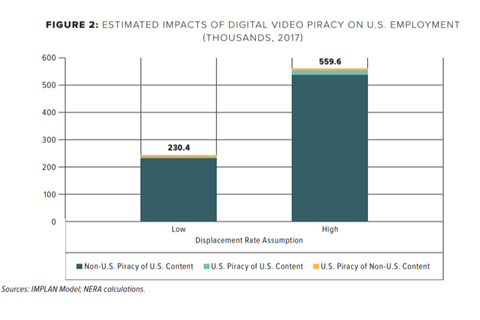 Online piracy costs the US economy almost $30 billion a year, with pirated videos viewed over 200 billion times, according to a report from the US Chamber of Commerce.

The movie and television sector brought in around $230 billion in revenue in 2017, but streaming is a big problem. The report from Chamber of Commerce’s Global Innovation Policy Center found the cost of piracy could even be as high as $71 billion a year.

The GIPC’s report, which was released in partnership with NERA Economic Consulting, found that piracy carried out across streaming services have now surpassed download-based piracy as the primary vehicle for pirated videos. 80% of piracy is attributable to streaming compared with just a few years ago, when BitTorrent downloads accounted for nearly 40% alone.

Pirated TV shows have the highest demand, with more than 230 billion views every year worldwide, with the vast majority coming from outside the US. 126 billion of these views were of content produced in the US. Popular TV shows like Game of Thrones went to great lengths to reduce piracy ahead of its final season.

The film industry is also suffering due to piracy, with 26.6 billion illegal views of US-produced films, according to the study.

The impact of piracy isn’t limited to loss of revenue, however, with the GIPC’s report also assessing the impact on jobs. It found that digital video piracy resulted in between 230,000 and 560,000 job losses per year. In terms of GDP, piracy saw a reduction of US GDP between $47.5 billion and $115.3 billion in 2018.

David Hirschmann, president and CEO of the GIPC, said: “Digital video piracy results in significant losses to the U.S. economy, harming businesses ranging from content production firms to the innovative technology companies that are driving the digital distribution revolution.

“While there is no single solution, global collaboration among industries and governments to educate consumers of the dangers of piracy, coupled with the expansion of legal options in cases of infringement, is necessary to curb these negative effects. All parties must continue to work creatively and constructively to enable dreamers, innovators, and creators around the world to continue to tell their unique stories and advance our culture and economy.”