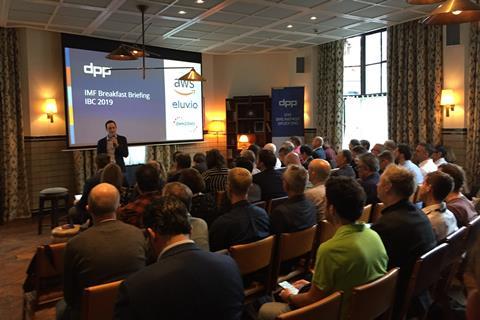 The DPP has released two new documents to extend the functionality of the Interoperable Master Format (IMF) with the development of an Auxiliary Image Sequence plug-in.

The component-based nature of IMF already allows multiple versions of a programme to be created, managed and distributed more efficiently. However, SMPTE ST 2067-21:2016 IMF is limited to a single concurrent video track in any composition. This restricts certain use cases that could otherwise realise the benefit of IMF’s full capabilities.

“The auxiliary image tracks expand the capabilities of the format into areas such as in-vision sign language. The simple design of the extension allows richer content, more advanced versioning, more automation and more accessibility for all audiences.”

The plug-in allows any organisation using IMF to dynamically layer image tracks for a wide number of different use cases, including sign-interpretation, localisation, branding and advertising.

The DPP confirmed it is not specific to its IMF Application specifications (SMPTE TSP2121), but agnostic to IMF applications.

ITV Signpost director Kenny Toal added: “It’s very important to ITV that we serve all our audiences with content that meets their needs.

“By working with the DPP on developing the Auxiliary Image Track, we will in future be able to bring the operational efficiencies of IMF versioning to the production and distribution of sign-interpreted content.”

The first phase is implemented by Recommendation DPP006. The second phase involves developing a more advanced mode, allowing users to resize and reposition the overlay within the IMF workflow and is expected to deliver in Summer 2020.

The DPP continues its support for the global adoption of IMF for Broadcast & Online. Next week, the winners of the DPP’s inaugural Virtual Hackathon will be announced. Competitors have been building new functionality for the IMF Media Management API, published by the DPP earlier this year.