F1 races back onto our screens but will changes slow it down? 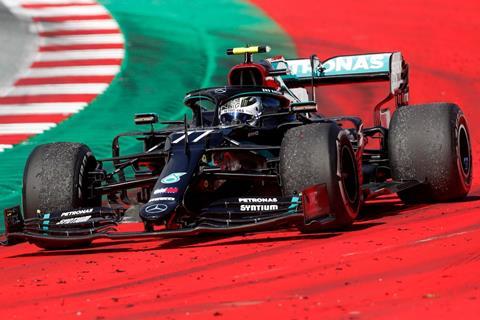 F1: Gets underway with noticeable differences due to Covid-19 restrictions

F1 has returned to action with big changes to convince governments of its ability to wrap the sport’s normal circus in a Covid-19 biosphere.

Aside from barring all spectators, F1 has dramatically reduced the number of officials at eight announced events, slashing its usual cast of 3,000 – 5,000 staff to 1200 and on-site broadcast personnel from over 250 to just 60.

That prompted Formula One Management (FOM), which controls host broadcasts, to bring forward a remote production model it had been planning to introduce from 2022.

Instead of producing and distributing the world feed on site as normal, camera feeds are being sent from track directly to FOM’s headquarters at Biggin Hill airfield in Kent from where the race is directed, packaged and distributed to rights holders.

One of those, Sky Sports, is also managing presentation remotely via Sky Studios in west London which is the base for former drivers-turned-pundits Anthony Davidson and Karun Chandhok. Sky still have a presentation team led by presenter Simon Lazenby and Martin Brundle on-site but Brundle’s famous grid walks are absent for the time being.

Channel 4’s 2020 coverage produced by Whisper includes highlights of every qualifying session and race, but Covid conditions mean the entire team, including presenter Steve Jones and former F1 drivers David Coulthard and Mark Webber, along with race commentator Ben Edwards, are now based in the UK.

“Using a studio would have been the straightforward option but we wanted an environment with more energy,” explains John Curtis, Whisper’s F1 editor of the decision to locate presentation at The Silverstone Experience museum for the opening few race weekends.

Regular on-the-road partner Gearhouse built the set and manages cameras, comms feeds and relevant track time pages as well as connectivity back to Timeline in Ealing which provides the presentation gallery and edit suites.

“Our attitude was, ‘if we are going to be here let’s turn it into a positive’,” Curtis says. “Rather than replicate normal production, how do we create a programme we couldn’t create on site?” 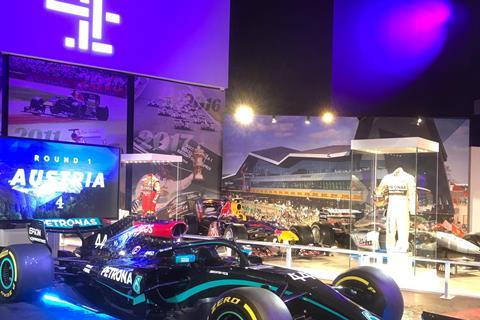 The Silverstone Experience: Is being used as Channel 4’s base at present

Accelerating production
Upping the production values includes use of a touchscreen for analysis, access to more UK-based talent, additional presentation positions, a camera jib and triple the number of cameras (from 2 to 6).

“We’ve a Championship winning Mercedes car on set and a 70-inch monitor for viewing live action, neither of which we would have on the road,” explains Curtis.

The world feed is sent from Biggin Hill to Whisper’s production gallery in Ealing and onward to Silverstone. The presentation feed is sent back to Ealing where it is pulled together with the live feeds and distributed.

“We rely on entirely on the world feed, we’ve no cameras on site,” Curtis says. “The F1 team has been helpful in providing us an extra camera on-site for interviews where slots are available.”

The team aim to present from the Silverstone track when Channel 4 airs live full race coverage of the British Grand Prix on 2 August. Whisper also hopes to gradually get presenters back on-site at Grand Prix as the season unfolds but production will remain remote for the foreseeable.

“The track is still the best place to present,” Curtis says. “While we already had quite an established remote workflow in place where producer, director, vision mixer and assistant producer were all based in Ealing, F1 is unique in the sense that presenters have the opportunity to mix with teams and gather information from team managers and ex colleagues between races. That’s a softer, less visible but valuable benefit of having direct access. Being remote makes programme packages with interviews and reactions harder to build.”

Shift to cloud distribution
FOM is still using satellite as the dominant transmission technology for world feeds produced out of Biggin Hill but it has taken steps to move this into the cloud.

Beginning with the Austrian Grand Prix at the Red Bull Ring it is working with London-based M2A Media to take supplementary feeds, such as onboards and pit lane, into the AWS cloud for global distribution.

“It’s a way for F1 to maximise their reach and gives them more flexibility,” says Marcus Box, CTO, M2A. “The traditional model was restrictive in the number of feeds they could produce. Over time they are looking to expand and enrich content. A satellite may only carry a subset of onboard cameras in a particular region so where there’s a driver from that country – say Finland or Brazil - we’re able to give broadcasters access to that driver’s onboards.” 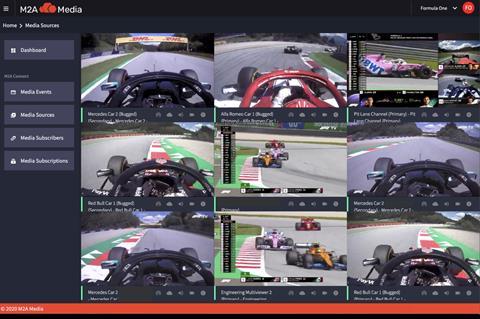 The M2A Connect service is not a playout solution but it is used to overlay graphics and to change audio tracks.

“It can also be used to acquire (contribute) links from the venue which F1 may look to do in future. We are also talking with F1 about further regionalising the feeds that broadcasters receive at ingest or egress location.”

M2A’s founders, Box and Mariana Kalkanis, were previously at the BBC where Box helped get iPlayer running and was instrumental in bringing in AWS as a cloud vendor. He says M2A’s philosophy is “simplicity at scale.” DAZN is its key client.

“We’ve taken some complex use cases and wrapped them in an orchestration layer which is aimed at media operators rather than broadcast engineers,” Box says. “Orchestration can be abstract for users so we’ve set this up for operators to clearly monitor confidence feeds with clear alerts for any issues with the source.”

Refreshing the formula
Already planned for 2020 and introduced in Austria is a new set of racing statistics powered by Amazon Web Services (AWS) in continuation of its official cloud and machine learning partnership with F1 since 2018.

The new gauges are aimed at helping fans to further understand the split-second decisions and race strategies made by drivers or team strategists that can affect a race outcome.

To generate the graphics, live data is taken from 300 streaming sensors that are fitted to each F1 race car, generating more than 1.1 million data points per second and transmitted from the car to the pit. This is then compared with 70 years of historical race data stored in Amazon S3. Data is output in a contextual way on F1’s international race broadcast feed, including its digital platform F1 TV. 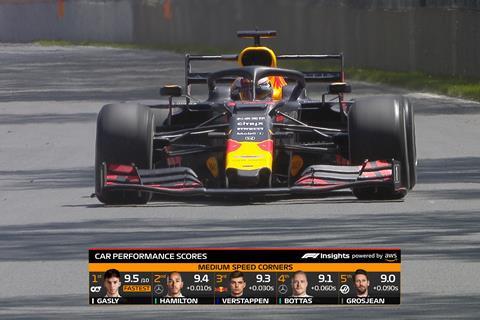 “Our existing relationship with F1 has already produced statistics that have brought fans [virtually] into the race paddocks, and our study of race car aerodynamics is influencing vehicle designs for the 2022 season,” said Mike Clayville, VP of worldwide commercial sales at AWS in a press release.

F1 is also considering using 5G mobile networks in future for a better experience, as the technology has reduced latency.

From this season, subscribers to F1 TV Pro now get access to all onboard cameras and hear unedited team radios, as well as watch an upgraded multi-screen Pit Lane channel. This channel covers multiple battles at once, with additional graphics, additional angles and expert commentary.

All F1 TV subscribers also have access to improved Live Timing features on the official F1 app, “with more data than what the F1 teams get on the pit lane with” according to the somewhat clumsy wording on the official website.

Audience crashes as paywall goes up
“Formula 1 has been viewed or consumed very much in the same way for the last 30 to 40 years,” admitted Rob Smedley, chief engineer of F1. “It is images of cars going round and round a track and it’s not really telling much more of a story than that.”

The increased use of car data is an attempt to better engage fans.

In the UK, F1 was already facing an uphill struggle after beginning a new contract last year which made Sky Sports the exclusive live broadcaster of all but the British GP.

In data shared by The Independent, this led to UK audiences tanking by 13.6% over the course of last season to a cumulative (Sky and C4) 54.8 million. Of that diminished figure, the number of people watching online was just a fraction.

That’s not quite what F1 owner Liberty Media had in mind when it put online streaming at the heart of its plans for the sport when it got the keys to it three years ago in a £3.7bn takeover.

“Our existing relationship with F1 has already produced statistics that have brought fans [virtually] into the race paddocks, and our study of race car aerodynamics is influencing vehicle designs for the 2022 season,” - Mike Clayville

There are two driving forces behind it, concluded The Independent. First, F1’s dramatic action is better suited to a bigger screen and, second, its fans tend to be older than those of other sports so they aren’t as used to watching TV online.

Backing up that idea is Barb data showing that the smallest screens attract the fewest viewers. Some 45.6% of viewers across both Sky and Channel 4 streams last year did so using a PC/laptop with. This was followed by tablets, which accounted for 32.3%, and smartphones at 22.1%.

F1 TV’s debut on the Roku platform addresses this and marks the first time F1 TV will be available to watch on a large screen format. It is only currently available in North America though.

Green is go
Environmental concerns are heating up with F1 conscious of reputational damage related to its perceived fossil fuel emissions. Of the 256,000 CO2 equivalent tonnes emitted during the 2019 race calendar, just 7.3% was attributable to the operations of events including broadcasting. However, the international travel and logistics required to put on each race that exhausted 72.7% of F1’s total carbon output. It plans to reach net zero in a decade, but that seems an eon away when going green demands more urgency.

“Environmental impact is part of every decision we make whether that’s what water bottle we use on site to how we travel,” says Whisper’s Curtis. “We will work with F1 and any other group we can to try and speed up the pace of change and we look at ourselves and what we can do better. Sometimes the greenest option is not the cheapest one but it’s about making the right choice.”