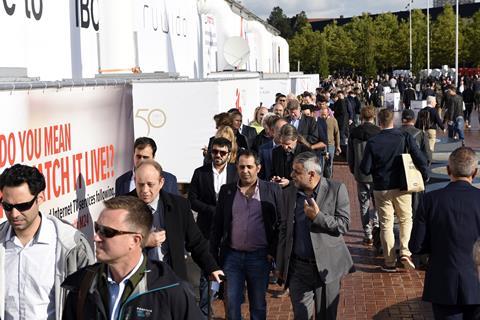 With IBC celebrating its 50th anniversary there was inevitably some reflection at this year’s show.

Twenty years ago Hall 8 had all or most of the show’s terrestrial transmitters. It was also, generally, the home of audio products and broadcast automation.

Back then, the latter category of company included the stand of UK automation giant Omnibus, complete with an actual bright red London double decker bus dominating the hall near the main entrance.

These old vendor categories still make up a good proportion of today’s Hall 8, and they are a convenient way to examine hall trends.

‘Automation,’ is an old term. ‘Software,’ encompasses a much broader range with many vendors in Hall 8 selling products that go way beyond playout, to categories such as content management or workflow or MAM or library or archive.

One big tech trend seen amongst Hall 8 ‘software,’ companies is doing more with IP and virtualisation. Many playout facilities of all sizes have started or are looking at trialling virtualised technology, often in line with equipment replacement cycles.

“It’s reflected here at the show and in the RFPs we’re getting,” said Tom Gittins, CEO of Pebble Beach Systems.

A Pebble RFP from a few years ago played prominently in what could be called one of the main show ‘buzzes.’ Media services company TVT, which acquired DMC in July, announced that all 87 channels from its former facility were now operating from a new Amsterdam facility. TVT was offering tours of this facility for existing and prospective clients during the show.

He added that the install was challenging, as not all of DMC’s playout channels were the same in terms of languages, Nielsen watermarking, audio and such.

Another Hall 8 vendor that had real virtualisation news was Playbox Technology, who used the show to demonstrate the cloud-based CloudAir, the server-based Neo platform, and, interestingly, hybrid configurations combining the strengths of both platforms.

Flexibility and speed are again key. “CloudAir eliminates the need for channel managers to wait for new technical hardware to be delivered, installed and commissioned,” said PlayBox President Don Ash. Available on a fast-startup software-as-a service basis, Ash claimed that CloudAir “makes the process of starting a new channel as simple as making a phone call.”

PlayBox also used IBC to announce the delivery of a scheduling, titling and automated playout system for Netherlands-based broadcast channel SLAM!TV, a system along the lines of a channel-in-a-box design. Here, AirBox Neo, TitleBox Neo and ListBox Neo form the central elements of a very compact transmission system.

Artificial Intelligence in Hall 8 was less about Sophia, the robot from Hanson Robotics with AI software whose story and picture graced the cover of the IBC Daily, and more about integrating smart, thinking software with larger MAM, library and other systems.

The addition of a strong AI brain can be seen as a natural way to better manage the massive volumes of multimedia content flowing through media organisations, and AI-enriched media management and workflow will likely become a vital part of the business.

One new collaboration announced at IBC was an alliance between Hall 8’s Dalet and Veritone, a young California company whose AI-based ‘cognitive computing’ analyzes unstructured public and private audio and video data.

Dalet Galaxy users can now better search and exploit every frame of video and every second of audio for objects, faces, brands, text, sentiment, keywords and more.

“The combination of the two complementary technologies spans across all media workflows (and) ultimately enables customers to create and deliver richer, better content to the right audience at the right time,” said Kevin Savina, director of product strategy at Dalet.

Jay Batista, GM of US Operations for media and content management provider Tedial, said that the company had started looking at AI technologies within the last year, and had even done some integrations. Despite this, the industry has not yet seen the real ‘killer app,’ for AI.

He said that within two years the industry will have a much more clear idea of what it could mean for the consumer, and for the broadcaster who needs to automate all the background processes to prep content for consumers. Part of this process - only connected to Hall 8 peripherally - was IBM’s Watson Video Enrichment supercomputing system, shown at IBC and now explicitly designed to exploit the potential of AI in media.

“(With AI) you’ll see new opportunities to use content in different ways,” said Batista. “We’ll create applications that use it (AI data) in unique ways for broadcasters who need to find ways to get more consumer interactivity, more connection.”

Batista added that the continued growth of IMF — now required by more and more Hollywood producers including Sony Pictures and Netflix — was also a definite trend of note for companies such as Tedial.

Growth and strength in the playout/content management/archive/workflow companies is caused by industry advancement; growth in the sheer number of bits and bytes of content being produced in today’s video-centric media world, and growth in the number of playout channels. AI is just a better way to manage parts of this.

Growth in the amount of content being produced also has the storage side of the media industry humming along.

Most of this action was over in Hall 7, but at least two storage companies were located in Hall 8 this year.

Panasas was an example of the sector overflowing from Hall 7. Like IBM’s Watson, it is also an example of a vendor active in non-media data-centric industries seeing a need for their skills and products at a show like IBC. While Panasas had exhibited in recent years in Hall 7 with local partners, 2017 was the first year the high-performance scale-out storage company exhibited at IBC on its own.

David Sallak, VP and CTO of the company’s M&E division, said this move reflected the company’s very real interest in the media industry and in the European market. The company had a demo of ActiveStor with DirectFlow for Linux and Mac. This demo featured an acquisition-to-post-to-delivery workflow that provides post-production facilities with a very fast media production experience, said Panasas.

A smaller storage company had a very active corner of the UK Pavilion. Disk Archive Corp. was pitching its ALTO range of high performance big data and content library with a century lifespan, ultra-low energy consumption, and lower cost of ownership. An alternative to LTO tape and RAID storage, the system features the use of standard SAS disks, an expandable chassis, a 64 bit OS, and hot swappable disks, fans and power supplies.

New and as-yet-unnamed is a “hardware-as-a-service” or “archive-as-a-service” ‘product’ that is not cloud-based, but on-premises hardware that is essentially rented and becomes OPEX. Unlike the cloud, this service provides local speed and customer oversight of the hardware and data.

“Now more than ever everybody needs archiving and new options on how to manage so much content,” said Tomas Petru, CMO of Disk Archive Corporation.

Audio vendors of all stripes and sizes probably make up half of Hall 8. In this sector, AoIP is a decade or more farther along than video, so it’s more of an established market. Beyond AoIP - whether Dante or RAVENNA or AES67 - other important topics were multichannel audio formats and DAB+.

According to Ulrike Lauterbach, director of sales and marketing for RTW, some customers are planning projects that are purely based on an IP infrastructure, but the timeline is quite indefinite. “We have also talked to quite a few customers who are still investigating on which technology/standard they want to count … this is similar to what I noticed last year.”

RTW used IBC to introduce a Dante monitoring and diagnostics device called PD Dante, in cooperation with the company Nixer. Lauterbach said RTW’s plans to include multichannel audio formats according to ITU 1770-4 in its Continuous Loudness Control Software were also greeted very favourably by show attendees.

Audinate, developer of the Dante media networking technology whose logo was all over Hall 8 stands, announced pricing for the tiers of its new Dante Domain Manager (DDM) platform, a network management solution that provides enterprise-grade system administration. It allows the creation of Dante domains to isolate and organize audio devices, permission-driven user accounts, cross-subnet routing of audio, and administrative features to monitor user actions and system status in key areas.

Audinate’s Dante has done a lot to make AoIP a reality, but how far along is IP and networking on the video side? This industry-wide, show-wide big trend was evident on the stand of Hall 8 anchor vendor EVS and also at Lawo, which drew large crowds to what appeared to be the second biggest stand in the Hall.

The new system gives engineers better visibility of all end points within an IP-connected network and acts as its central orchestrator, guaranteeing the delivery of bandwidth-demanding media throughout the infrastructure. At the show IBC TV’s live production workflow benefitted from S.CORE Master as part of its all-IP production.

Germany’s Lawo seemed to come on strong at IBC, with an all-new networking console designed for networking in complex IP production infrastructures and its concept of a ‘Broadcast 3.0,’ IP-based broadcast infrastructure for audio, video, data and control.

Part of this future is vsmSOUL, which made its European debut at IBC. vsmSOUL is an overarching service for IP-based production environments that manages the generation and routing of audio and video streams in any multi-vendor IP setup. vsmSOUL is aware of, and handles, information from all system components, and is compatible across individual interfaces and technical solutions, said Lawo.