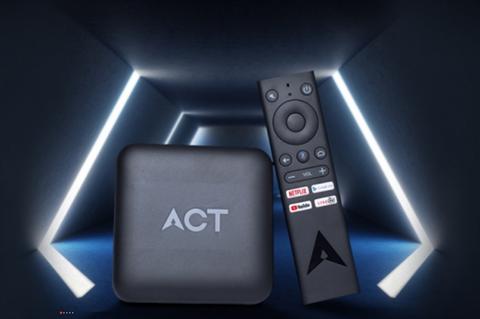 Indian broadband operator, ACT Fibernet has segued into smart devices with the launch of its Android TV box, the ACT Stream TV 4K device is now available to customers in New Delhi, Bengaluru, Hyderabad, and Chennai.

It has been competitively priced at Rs 4,499 (approximately $52) as a special offer, the device is available along with a refundable security deposit of Rs 1,500.

The new streaming service is available for new and existing customers of ACT and will run on Android 9 Pie, which has support for Google Assistant and has 2GB of RAM and onboard 8GB storage.

It differentiates itself from other Android TVs with its support for Netflix and Google Play Store which also extends to Hooq, Zee5, Hotstar, Sony LIV and others.

ACT said that its customers will also be able to watch more than 100 TV channels with the ACT Stream TV 4K.

Customers can subscribe to premium content from existing OTT streaming partners and channels and pay for their subscription directly as part of the ACT Fibernet monthly bill and will also enable customers external connectivity with the support of two USB devices at a time.

ACT has become popular with its customers after offering faster broadband connections in selected cities across the country.

According to a report by India Today, the demand for smart devices has been steadily rising as internet connectivity has become more affordable.

Last week, India public service broadcaster Doordarshan announced it is to be broadcast in Bangladesh and South Korea as part of a deal struck by the Indian government.