ISE 2019: The impact of visual communication

Pro AV is a bustling sector and by 2023, the industry is predicted to be worth U$230 billion dollars. This is up from U$180bn today, according to AV trade group, AVIXA, with video the reason for much of AV’s expansion. 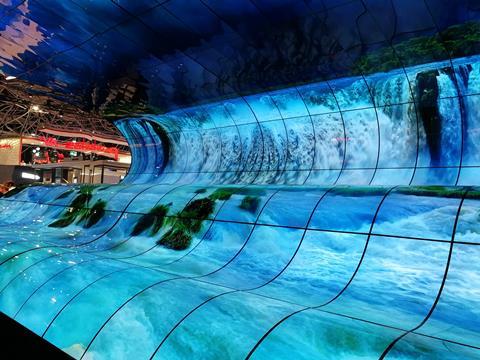 Pro AV is largely about business to business communications in markets outside media and entertainment.

That includes hotels, the military, banks, government, retail and education. Video has become the essential media in all of them whether that’s on digital signage, internal training, remote meetings, command control, surveillance or in more exotic applications like holography.

This is evident at AV trade show Integrated Systems Europe (ISE) where some halls resemble Times Square or the Las Vegas strip, so packed are they with giant screens displaying eye-popping images of everything from glaciers to astronauts.

Automated video production
Unlike film and TV, however, the production of video is not a core skill for most corporate enterprises. The responsibility for installing, managing and maintaining video kit as well as shooting, packaging and distributing it often falls to under-resourced AV and IT departments.

NewTek and Blackmagic Design among others have come up with inexpensive solutions for this that make a virtue of being relatively easy to use with little training while delivering professional quality video. 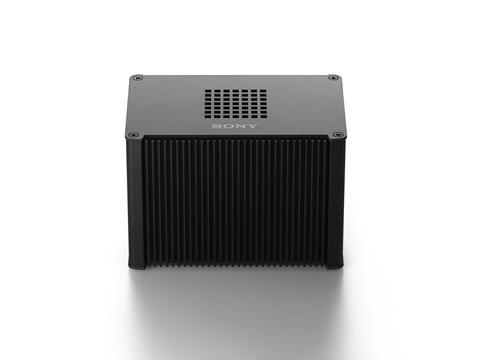 A Sony innovation unveiled at ISE goes further by using motion and face detection to analyse the input from multiple pan-tilt-zoom cameras. The REA-C1000, which Sony likens to a ‘brain’, can extract handwritten objects from black and white boards using an object detection algorithm.

A chroma keyless function can extract a presenter from the video and overlay them onto any background without the need for a dedicated green screen. The device can also detect and move/zoom into the gestures of audience members and track presenters in frame.

Altia Systems announced PanaCast 3, dubbed the world’s first intelligent panoramic video system. This integrates three 13-megapixel cameras and will automatically stitch a 4K resolution 180-degree field of view. It’s for mounting on top of a digital display or on a wall and is intended for video conferencing or meeting collaboration. It too is AI-enabled “which is critical for companies to improve participants’ experience autonomously, automate workflows, and generate data lakes of valid information,” said CEO Aurangzeb Khan. It only costs U$895.

Related new technologies include a complete video production station from Datavideo housed in a small 8kg suitcase. The HS-1600T has scope to live switch up to three cameras (not included) and has a built-in encoder for streaming.

Magewell debuted an HDMI streaming encoder intended to make live streaming “remarkably simple” for non-professionals. The Ultra Stream can be controlled by smartphone app, record files to a USB drive and is capable of taking in 4K 60fps and down-converting to HD for streaming.

Such is the sophistication of digital signage today that it can capture key metrics such as how many people looked at the sign, how long they looked at it for, how they reacted to it and even their gender and age. It can even modify the messaging in response to that data. Networks are being managed in the cloud and screens themselves can be morphed into all sort of shapes, structures and sizes.

Fashion retailer Primark, for example, now features LED screens rather than merchandise in its front windows, has transformed escalators into a LED feature and created large video walls on which content is sensor-triggered to attract the attention of shoppers.

The sector is experiencing a significant amount of disruption, however, with changing consumer behaviours and expectations driven by the likes of Facebook, Amazon, Netflix and Google.

Stefan Schieker, managing partner at Result MC, explained: “These companies taught consumers to use touch, now they’re trying to teach us to use voice and not to care about owning things, but to share it. That’s having a deep impact on the retail industry and how we use signage to convince consumers to do, use and buy stuff.”

“Cinema is expected to be one of the fastest growing markets” Sean Wargo, AVIXA

LED makes cinema impact
LED screens are making an impact in theatrical exhibition where the technology could be an eventual replacement for traditional projection. Direct View LEDs are now installed in about 20 theatres worldwide.

“Cinema is expected to be one of the fastest growing markets because Direct View is a potential upgrade path for theatres and because of digital signage investment in cinema lobby areas,” said Sean Wargo, AVIXA’s senior director of market intelligence.

Cinema chains are adding more and more technology into auditoria in a bid to attract more people to an experiential experience. They have to, since the average cinema-goer in Europe only spends about five hours in a cinema a year, according to analysts IHS Markit.

“The range of technologies from 4D seating to Premium Large Format are multiplying in cinemas because there is so much other competition for our time. It has to grab our attention,” said IHS’ David Hancock. 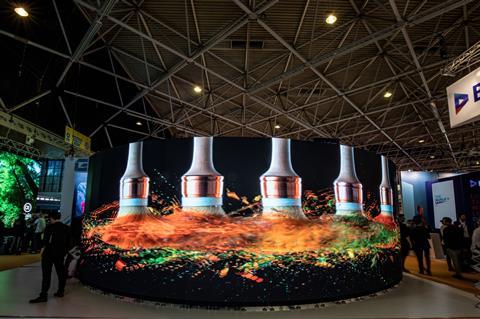 Disappointing consumer take up, however, has not stopped B2B firms from experimenting with immersive technologies.

A successful case-in-point he mentioned was location-based amusement park, The Park Playground in Antwerp, Belgium which has integrated a TV series into one of the Park’s experiences, involving a bank robbery that goes wrong.

Futurist Amelia Kallman predicted that WebAR – which uses mobile devices to provide Pokemon Go-style augmented reality experiences – will be one of the biggest trends in AV in 2019.

“For years retailers have tried to bring physical and digital experiences together. Now, you will be able to create events such as scavenger hunts in-store, which people can share on social media.”

The fashion and luxury brands industry is eyeing AR with interest. In one experiment, the London College of Fashion worked with LucasFilm’s immersive entertainment lab on a series of digital garments. The college’s head of Fashion Innovation Agency, Matthew Drinkwater, believes that entire virtual collections could soon be created as a means to engage the public with new designs.

“In a decade, mixed reality glasses will be consumer facing and then, when you can add digital content to the real world it will open up whole new business models.”

Holography is predicted to dominate AV “when someone cracks it,” says Evan Grant of AR/VR design company Seeper. “The way you can bring human storytelling into the environment to create a realistic human 3D avatar or hologram has huge potential. The entire goal is to create a sentient bot that you can converse with.”

Amy Winehouse will feature as a hologram in an upcoming tour. A projection of the late singer will “perform” digitally remastered arrangements of her songs, backed by a live band, singers and what the production company Base Hologram calls “theatrical stagecraft”.

“Amazon, Google will basically give their AI-hardware away because what is valuable to them is data about all of us.” Evan Grant, Seeper

Adding AI to holography is another AV tech trend. Immersive experience firm Tiger Heart is working with artist Sara Pope to make a holographic pair of lips fused with AI. “The idea is to create an emotive experience where the user engages with the lips,” said Tiger Heart founder Sanj Surati, who said he was pitching Scarlett Johansson to be the lips’ voice. “It’s just one example of the fantastic engagement that needs to be transposed to other parts of AV.”

There was a warning, though. “There will be less than a handful of AIs in the world,” Grant said. “Amazon, Google will basically give their AI-hardware away because what is valuable to them is data about all of us. Developers will have to use AIs from Amazon, Google and in doing so they become an even greater gatekeeper.”

Holoportation
As in other industries, 5G is anticipated to be a huge game-changer. The super-speed data network promises realtime collaboration and ‘holoportation’, a sort of Skype on steroids.

This could be enabled by devices like Microsoft Hololens, version two of which is due to be announced later this month. In one example, a person is filmed in 360-degree 3D video with data sent over 5G for viewing over a Hololens by an executive in another country for a virtual face to face meetins. This is possible now but only when heavily pixelated and with unworkable delay, but 5G will cut latency, increase quality and render the experience holographic. 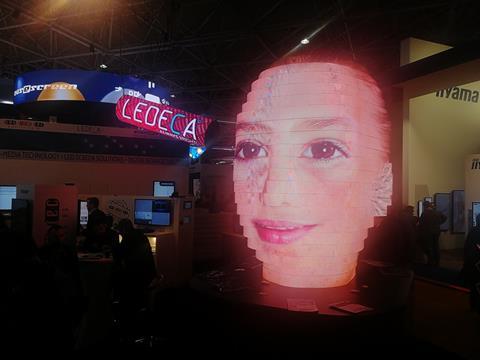 LED display on the Ledeca stand

Smart homes
AI and facial recognition will play an increasing role in the personalisation our homes. That was a key takeaway from an ISE conference about Smart buildings.

Instead of sensors and interfaces, smart home developers should think about the performance of people in a space, suggested Michael Schnieder, creative technology chief at architectural consultancy Gensler.

“It’s not just lights, sound, temperature but people, storytelling, communities and social elements which are core to smart buildings,” he said.