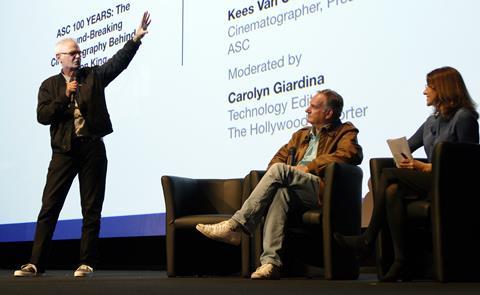 IBC2019: Deschanel explains the cinematography behind The Lion King

Speaking in the IBC Auditorium on Saturday lunchtime Deschanel explained how, before they started work on the production, he embarked on a trip to Nairobi with director John Favreau to get a feel for the landscape that they would later recreate digitally at MPC in London.

“We talked about shooting it very much like a documentary with long lenses at great distances. But then we went to Africa and Panavision provided us with these beautiful state-of-the art lenses for our Arri Alexa 65 Cameras which we shot from off the back of the truck.

“The lions came within ten feet of us and we realized at that point that we could get much closer and it was going to be much more possible to tell the story we wanted to tell.

He added: “We were also inspired by Plant Earth 2 and the work they have been doing with remote cameras and drones which allows them to get in real close to the animals.

“We thought ‘why deny ourselves that possibility?’ And so that because our guideline.”

The majority of planning work on the Lion King actually took place much closer to home in an LA studio, as expansive African landscapes were viewed by director Jon Favreau through virtual reality headsets. Deschannel used it to plan shots by looking at the locations in VR.

Describing the virtual environment, he recalled: “John was black, Rob [Legato the VFX supervisor] was red and I was green. Rob would be up by a water hole while I was at Pride Rock. It saved a lot of filming time– we didn’t have to hop in the van or struggle through long hot days to get shots.”

What has been called striking about the film is the level of expression on the animal’s faces and the cinematographer added that virtual production techniques helped him scope the best place to put the cameras to highlight the emotions on the characters’ faces.

“We were able to get some obscure points of view that were able to tell a different story about the characters and VR gave us that opportunity,” Deschanel added.