Live production: How sports broadcasting is racing ahead with technology

IBC365 looks at the latest innovations in covering live sport, from internet streaming protocols and virtual sets to 5G contribution and 8K production. 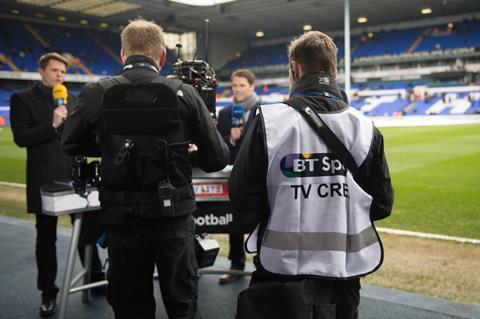 Leaving aside the huge legacy that the sports broadcast industry will undoubtedly take from using remote production tools at this time, we can’t ignore the other trending technologies set to impact live sports in the near future.

8K Champions League promised
BT Sport’s dramatic first public live 8K sports broadcast in the UK on 27 February was more than just a proof of concept. The broadcaster has confirmed launch of an 8K service for its BT Ultimate subscribers as soon as the start of next season.

When that will be of course is moot just now, and any forecasts BT Sport may have had about sales of 8K TV sets in a post-Olympics summer will have gone out the window.

However, that won’t dent BT Sport’s mantle as the most technically progressive broadcaster in the world, nor its ambition to lead on a format that many think consumers won’t appreciate (or pay more for).

The technical setup in February was similar to the closed demo which BT Sport showcased of a Premiership Rugby 7s match during IBC2019. On this occasion, an 8K picture supported with HDR10+ of the UEFA Europa League match between Arsenal and Olympiacos was screened to a small audience watching within the Emirates on Samsung QLED 8K TVs.

This won’t be a separate transmission chain. Instead, it seems likely that BT will acquire pictures in 8K and then output 4K and other versions from one OB, a move which streamlines cost and complexity.

When the new season kicks off, BT Sport plans to offer coverage of Premier League and Champions League.

Since UEFA has not announced an 8K production, presumably BT Sport’s native 8K offer will only cover the home matches of British clubs in the Champions League, though viewers with a telly capable of upscaling to that resolution could also experience a close proxy.

Paolo Pescatore, tech, media & telco analyst at PP Foresight, predicts: “Fans will need to upgrade their existing packages [of TV, broadband line and so on] to superfast fibre. Therefore, expect to see some interesting bundles in the future… delivered to any 8K TV.”

New dimension to virtual sets
The combination of games engines, powerful GPUs and high-fidelity LED video walls is altering the landscape of film and TV production.

“In the last year production has become the fastest growing space,” says Tom Rockhill, chief sales officer at disguise. “The most popular application is sports.”

For ITV Sport’s presentation of the Rugby World Cup from Japan last summer, disguise worked with technical partner Anna Valley to create a three-screen LED video wall backdrop of a Japanese cityscape for the hosts sitting in The Maidstone Studios, Kent.

“It gave the illusion of perspective so when the camera moves to the left the image moved to the right, so it looks like you’re looking out of a window,” adds Rockhill.

Producers are already working with augmented reality to bring graphics to the foreground of static virtual set environments and using extended green screen backgrounds to display graphics rendered out of game engines.

“The next step is to add real-time environments running on a surface that the talent can actually see – either by projection or LED – and to combine all the elements together,” says Rockhill.

Media transport gets commoditised
The ability to scale remote live production affordably over the internet is reliant on transport protocols like Emmy Award-winning technologies SRT and Zixi that smooth the jitter, reduce the packet loss and secure the stream.

While Zixi is proprietary, SRT is open source although closely associated with its founder, the encoding specialist Haivision. Obviously, if your encoder only supports Zixi and you use it to deliver to a decoder which only supports SRT, it won’t work.

Enter the Reliable Internet Stream Transport [RIST] protocol, which aims to be the industry’s shared standard for allowing even lossy networks to be used for mission-critical broadcast contribution.

The RIST Forum, officially launched a year ago, has some way to catch up to SRT which has over 200 members. Supporting both are companies like Net Insight and Open Broadcast Systems but it’s in everyone’s interest to promote a single interoperable method of exchanging media data.

Both Zixi and SRT are part of the working group at the Video Standards Forum (VSF) which is creating RIST. The VSF contributed a key role in devising SMPTE standard 2022-6.

Whether or not a winner emerges out of Zixi, SRT and RIST, they are just one part of the bigger low latency chain.

Here the industry is optimistic that an extension to CMAF (Common Media Application Format) called low latency CMAF (LL-CMAF) will do the trick.

CMAF was created to bring together the HLS and MPEG-DASH formats in order to simplify online video delivery. LL-CMAF is expected to bring down glass to glass latency to four to seven – about the same as broadcast – and open new opportunities for OTT, live sports, gaming and interactive streaming.

Sport bets on virtual
With live sport in global lockdown (Belarus soccer aside), sports casters and leagues are switching to virtual games to keep some revenue ticking over.

Initiatives include plans by the ATP to launch a virtual tennis season later this month with IMG Arena, the betting data distribution arm of the IMG talent agency.

The online gambling industry is worth $46 billion worldwide according to Statista, the bulk of which comes from sports.

Virtual betting products train AI algorithms on archives of historical sport-specific data to simulate games and results as close to the real thing as possible.

Fans can bet on results or tap into ‘in-play’ markets, while bookmakers benefit from being able to offer matches around the clock – not just when real matches are taking place.

The ATP Tour’s officially licensed tennis product will use assets such as tournament names and logos, as well as 3D motion technology, to entice gamblers with its authenticity.

Fellow sports betting information distributor, Sportradar, is also in on the virtual gambling game. The company has reached agreements with MLB, FIFA, and UEFA to deliver fans virtual betting platforms.

Sportradar’s virtual gaming solutions have been around for a decade, and currently more than 180 bookmakers worldwide offer virtual versions of basketball, tennis, soccer, and horse and dog racing.

5G contribution comes on stream
According to a recent survey published by Haivision, 5G tops the list of new technologies that broadcasters believe will have the biggest impact on the industry within the next five years.

In 2019, operators began launching commercial services, enterprise use cases became clearer and it moved into consumer consciousness. 5G was on course to account for 20% of all global connections by 2025, according to mobile operator’s trade body GSMA.

5G smartphone sales and infrastructure rollout may be delayed but the technology’s part in live sports is assured.

A prime early use-case is ‘first mile’ contribution. With 5G it will be possible to broadcast a live sports event directly from cameras on the field or more likely, to stream to a broadcast facility for switching and graphics.

Ariff Sidi, GM & chief product officer, Media Platform at Verizon Media, says: “5G is still very conceptual in many people’s minds, but the technology is already having a transformative impact on video distribution. The deployment of next-generation networks is going to transform the live arena with the way that we experience sports games, concerts, and other major events.

8K VR still waiting
A demonstration at the French Open tennis championship last May with partners including France Televisions, Orange, Tiled Media and Harmonic proved that it’s possible to deliver live video in 8K resolution over a 5G network.

Theirry Fautier, VP for video strategy, Harmonic says: “8K is the only technology that can capture the entire field for sports like tennis, soccer and baseball. We think there could be interest in this because it is already being done in the broadcast production domain.”

However, even he admits take-off of VR video applications has been disappointing.

“We expect the combination of 5G with 8K production delivered to next-gen devices like the Qualcomm XR2, featuring a newly announced VR reference design, will bring new life to VR video.”

8K trials of numerous sports including basketball have been made over several years but if anyone can make commercial and production success of it, you would bet on BT Sport. As part of its wider 8K production workflows it has trialled 8K 360° and sees the main initial application as allowing users to pinch and zoom into the picture on their mobile device.