Love Island: From villa to screen

Behind the scenes of ITV’s summer hit that has sold all over the world to countries including Germany, Australia and Finland.

The dramatic entanglements of Love Island’s contestants are nothing if not minutely documented. But less well known is how every kiss, mugging off and argument is captured, analysed, clipped and aired for almost instant public consumption.

The fourth season of the hit ITV2 show, produced by ITV Studios, regularly pulls in around three million viewers keen to follow every move of the islanders holidaying in a villa on the east coast of Mallorca.

The matchmaking show is stripped weekdays into hour-long episodes for eight weeks until the end of July and uses a total of 73 cameras, four more than the 2017 season.

The post production demands and fly-away kit has grown too, which - given the confines of the space in and around the villa - forced ITV to locate its production hub, post and uplink facilities 5km away.

“This is the biggest challenge for this series,” explains ITV Studios’ Technical Manager Steve Kruger, who works on the show.

“The size of the production has grown in tandem with the show’s popularity so while we have a gallery up at the villa, we are sending links back to the Edit Village in a second site.”

Local links
The distance between the villa and the Edit Village (3.2km by line of sight) also crossed many different landowners and multiple roads ruling out the conventional use of fibre. Instead the connection is made by various microwave and RF kit using technology supplied and managed by Timeline.

Fourteen HD video feeds (all 30Mb/s H.264) are multiplexed together and sent between locations over two separate technologies for redundancy. The primary path is an ASI Streams on two 7GHz RF links, the secondary path is Video over IP on a 75GHz (2Gb/s) link. 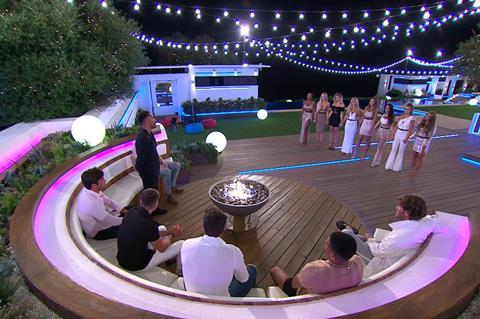 One of the bigger challenges faced with the multiple sites was providing the Edit Village access to both the contestant mics as well as all the hidden and effects mics. After researching various solutions working with the latency of the IP link, ITV went with DANTE over IP into a boom recorder.

ITV has also beefed up the tech that underlies the editing process. “Because we are editing multiple cameras yet still need to meet regular fast turnaround times we upgraded storage from Avid ISIS 7500 to Avid Nexis and now edit at DNxHD120 (rather than MPEG50 as previously) which has increased the stability of the edit suites especially when editing a combination of multicam and third party FX plug-ins.”

The Nexis can store 360 Terabytes but even this is dwarfed by the 500TB of nearline storage. As video feeds come into post around the clock it is recorded by multiple EVS XT3 servers with a copy of each 20-minute chunk of media sent to the Nexis for editing and another copy transcoded to MPEG50 and sent to the nearline.

While the Nexis storage is constantly pruned as episodes are finished the nearline is designed to hold all the feeds for the production’s duration.

“The size of the production has grown in tandem with the show’s popularity.” Steve Kruger, ITV Studios

Remote camera capture
No plotting or canoodling couple can escape the cameras dotted around the villa itself. The garden area is patrolled by four manned Sony HDC-2500 line cameras with Canon XJ86 box lenses, and an array of Panasonic AW-HE130 hotheads “which operate very well under low light conditions”, according to Kruger.

Two additional waterproof AW-HR140 units are at poolside, one of which is mounted on a Luna Remote Systems railcam dolly. “In extreme weather we can leave those two exposed,” says Kruger.

In the controlled lighting environment inside the villa, Panasonic AW-HE40 PTZs are fitted. Also new for 2018 are five rackable Marshall Electronics’ minicams covering the make-up mirrors and for wide shots of the dressing room and bedroom. The camera control system is a Robotronics system provided by NEP.

“It’s quite remarkable that we can control sixty-odd cameras with just two operators when years ago that would have been unheard of,” says Kruger. “For Celebrity Love Island in 2005 every PTZ camera had a separate manual controller.”

The radio mics worn by the contestants have been upgraded by Canadian developer Q5X to be fully waterproofed and also rechargeable, saving the production the expense of carting around hundreds of batteries (there are two mic packs per contestant).

“In the first series we had some mics damaged by water from around the pool area so we worked with Q5X to refine the kit,” says Kruger. “Now a contestant could jump in the pool and the transmitters and mic capsules wouldn’t suffer long term damage plus we don’t have to deal with the often fiddly and unsightly aqua packs.

“Generally, they are worn on the arm or in a bumbag but we can also clip them onto floats in the pool and keep them at water level to continue transmitting.”

All cameras, audio and the gallery facilities are provided by NEP.

Production workflow
One aspect that remains manual is the logging process. Teams of three loggers in shifts transcribe conversations and use hotkeys to capture every event from the raw footage into a searchable database. They perform this using a bespoke reality TV Content Management System (CMS) devised by Australian post house Cutting Edge. Versions of the software were used on I’m a Celebrity and in Africa on ITV2’s Survival of the Fittest. 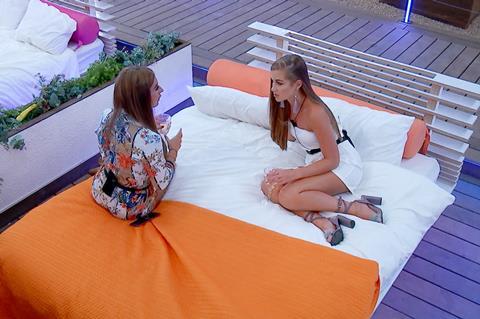 Explains Kruger: “We have looked at using artificial intelligence to automate the logging process but found that with the varying accents involved and the speed at which people talk combined with recording live in the field where mic positions are not always ideal, that reliability was an issue. We also tested it for transcribing conversations from the beach hut (diary room) but at this stage AI is just not accurate enough.”

The loggers, sited in the gallery, work on two different stories – dubbed Stream A and Stream B – from twelve main video feeds. Each Stream has a reality director, hothead operator and audio director assigned to it.

The CMS logs are then used by the Story Producers and Edit Producers and turned into ‘CMS Scenes’ which are then linked to media on the Nexis and handed on to the editors to begin the edit process. The story editors are all editing on Avid Media Composer and the four finishing suites are fitted with Avid Symphony.

“The turnaround time from something happening in the villa to being available to an editor in post is 20 minutes,” says Kruger.

The social media team has doubled this year too. The team is based on site using two dedicated Avids to clip up content from the previous night into packages for upload to ITV.com and mainstream social networks like Facebook, Twitter and Instagram. Publication is generally timed around lunchtime in the UK in order to tease that evening’s broadcast.

“It’s quite remarkable that we can control sixty-odd cameras with just two operators when years ago that would have been unheard of.” Steve Kruger, ITV Studios

Playout from the island
The show is also played out from Mallorca, beginning with a complete playout at 8pm (GMT) each evening direct to ITV Hub’s operational HQ.

Love Island was a huge hit on ITV’s online platform in 2017 with many viewers choosing to stream it live rather than via ITV2. However, the on-demand version of the show in 2017 was delayed by a half hour meaning viewers weren’t able to catch-up instantly once the show had come off air at 10pm.

That has been addressed this time around. 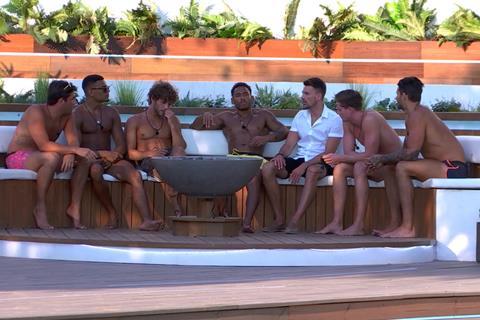 The boys around the fire pit: Love Island series 4

“There was a big push this year to ensure the programme is available on the Hub for on-demand as soon as we come off air with the TX,” says Kruger. “So, we’re playing out to the Hub an hour earlier so the team there can start ingesting and compressing the files both ready for ITV’s Native Hub and also send over to Virgin, Sky and other Hub partners.”

Uplink is handled out of Timeline’s RF1 truck by an EVS operator, a PA, uplink engineer and Kruger himself.

At 9pm (BST) the Mallorca team roll live to air from an EVS sending via two separate satellites and downlinked in two locations in the UK to minimise risk of exposure from bad weather.

As soon as that is over, the Mallorca team reversion the entire programme for worldwide distribution, sending a file back to the ITV Studios Global Entertainment team in the UK for those overseas broadcasters that have brought the series such as TVNZ and Channel Nine in Australia.

Among other things this entails swapping out any music for which the show doesn’t own international rights.

Any calls for viewer action – such as votes – are closed half an hour after TX and with teams immediately taking the results of the vote to compile into the next day’s programme.

As this season draws to its inevitable climax watched by millions, you can bet the production values and technical complexity will be move up another notch next year.

Read more One moment in time: The making of Whitney