NAB 2019: The rapid growth of esports is proving to be a godsend for live event kit vendors, and as a result was a major focus at this year’s show in Las Vegas 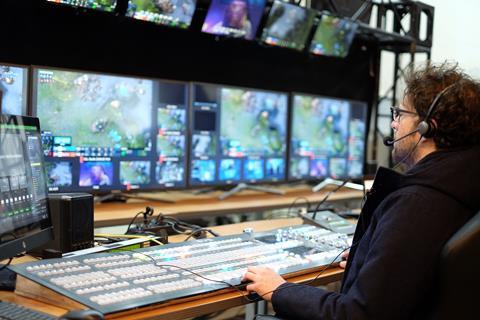 With the global audience forecast to hit 450 million and industry revenues set to breach $1 billion for the first time in 2019 according to Newzoo, esports’ rapid growth is a godsend for under-pressure live event kit vendors.

“Clearly, esports is a programming content category that is moving beyond millennials and into the mainstream of American society,” explained Dennis Wharton of the NAB.

For the media and broadcasting industries, esports and, more broadly gaming and game streaming, “will be a key component of their future media strategies,” underlined Newzoo’s Cleo Sardelis.

Vendors keen to cash in include those whose camera channels, switchers, replay machines and graphics gear has been staple to the outside broadcast industry for the last 30 years.

Grass Valley, for example, hosted a live esports competition at its booth to demonstrate its ability “to leverage decades of live-production experience to meet the specific needs of esports companies and specialist venues.”

“Esports is a programming content category that is moving beyond millennials and into the mainstream of American society,” Dennis Wharton, NAB

Grass Valley also attached itself to the NAB esports event alongside fellow sponsors Akamai, eBlue and The Switch.

The latter is a US-based operator of private cloud services for media and it used NAB to launch Switch eSports which is being pitched as a way into live streaming and remote production for broadcasters.

“The real value [of the initiative] is our ability to connect a live gaming or esports producer from anywhere in the world onto The Switch network, enabling them to then use all [our services] including [our] 10 studios across the US and in London, and our dedicated connections to more than 800 content producers and distributors, including the leading digital platforms,” explained Keith Buckley, CEO of The Switch. 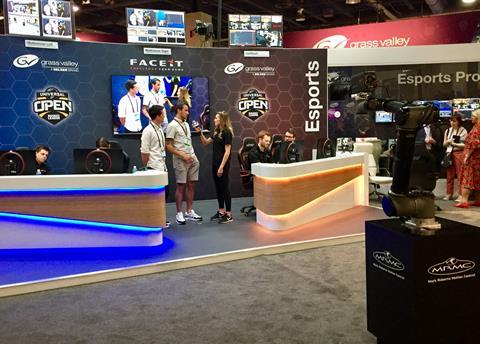 It’s an effort that would seem to rival Forbidden Technologies’ Blackbird which offers similar capability. At the show, Forbidden reconfirmed its pact with UK-based esports producer Gfinity which uses Blackbird to create highlights and other content from live streams for social media. Blackbird was also used to drive fan engagement for the live pro-celebrity Fortnite event in LA last year.

Also promoting its presence at the NAB Esports Experience was KVM maker IHSE USA “Esports is the perfect application for a custom-designed, dependable KVM extender,” reckoned Dan Holland, IHSE marketing manager. “Gaming pros typically require a lot of screens, both onstage and elsewhere, in a venue that can offer sufficient support for high-end, distributed video and direct computer access, together with minimal latency or mouse lag.”

EVS lays claim to building esports’ first in-game slow motion replay solution in which ‘observer PCs’ are placed into a live game, viewing the action as if they were cameras. Feeds from these are recorded, ingested by an EVS server and slowed down to the broadcast-standard 60Hz. EVS also promotes DYVI, its software switcher, for esports producers to cut together content from the live play output from the gamers’ PCs and for the live programming. 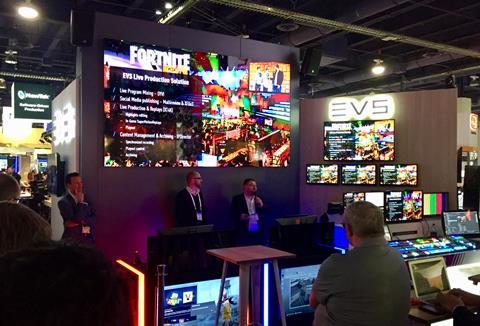 According to Intel, which sponsors esports competitions and has a vested interest in selling PCs with its chips to gamers, esports is the fastest growing spectator sport.

Revenues are on track to hit $1.6bn annually by 2021 but as with regular sport it’s the potential earning from the betting market around esports that are astronomic. Research firm Eilers & Krejcik Gaming forecasts that global esports gambling could top $13bn by next year.

“Gaming pros typically require a lot of screens, both onstage and elsewhere, in a venue that can offer sufficient support for high-end, distributed video and direct computer access, together with minimal latency or mouse lag.” Dan Holland, IHSE

Naturally, the Luxor hotel and casino on the Las Vegas strip has a 30,000 square foot esports games and broadcast arena.

According to analyst eMarketeer, the esports fan is a conundrum for brand marketers. Nonetheless, esports viewers “tend to be loyal, tuned-in, digitally savvy and more affluent than the average consumer,” it states. “The trick is learning where, when and how to reach them.”

Keen to keep up with millennials, major sports governing bodies including the Olympic movement, are embracing esports tournaments while keeping them at the moment at arm’s length from their main competitions.

Even cricket, seemingly the most digitally immune of sports (EA Sports axed computer game EA Cricket in 2017) can’t ignore the tide. The sports’ governing body in England, the ECB, has appointed consultancy Strive to evaluate the potential of video gaming and esports as a platform to engage young people.

Despite the sizeable viewership figures, esports constitutes a small niche within gaming. Active gamers in China alone number 619.5 million with figures on the rise. This is driven by the growth in mobile gaming, a sector that was responsible for 49% ($63.2bn) of the games industry’s annual revenue in 2018. It’s these impressive numbers and the associated first-party data opportunity that is driving many governing bodies to explore gaming and esports.

Motorsports is taking a lead. Formula One owners Liberty Media has more than doubled the prize money for this year’s esports world championship and will include more races and live events on the calendar. Last year’s competition, which was fronted by F1 teams, was watched by 5.5 million viewers.

“The first two seasons of esports for F1 have been so successful,” F1’s head of marketing, Ellie Norman, told ESPN, “It will be a matter of time before we see the convergence of these worlds getting an absolute overlap. I think that’s a really exciting apex that’s going to come.”

F1 is behind the curve though. Upstart motosport G1, run by Israeli car manufacturer Griip, has already put virtual races on par with the track. Using simulations of some actual G1 race venues drivers are competing head to head in simulator games and will score points toward this year’s Championship. Further plans include fast tracking an esports competitor into a seat in a G1 car for future series.

LiveU is providing the live streaming technology for the 2019 G1 series and was plugging this by showing off a G1 racecar on its NAB stand. 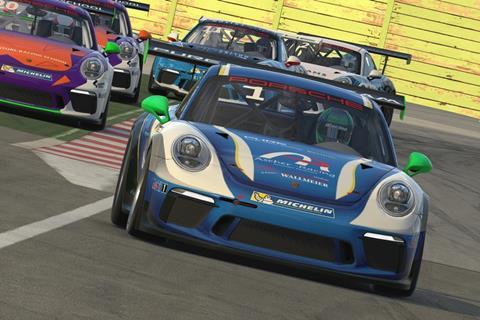 iRacing, which claims to be the leading online motorsports simulation game, announced it is using Limelight Networks’ content delivery network to deliver software updates containing the latest track and car information to players. Software updates range from 4GB to 5GB for existing players and up to 30GB for new members, however customers had complained of inconsistent download performance. Perhaps not any more.

Games engines driving virtual production
The core technology driving realtime computer gaming is also advancing the production possibilities of broadcast TV and feature film. Games engines are integral to so much virtual production and real-time broadcast workflows that developer Epic Games was awarded a technical Emmy in the brand new category ‘3D Engine Software for the Production of Animation’.

“It’s a super-powerful collaborative and filmmaking tool,” he said. “We hope to compress pre-vis, tech-vis, post-vis into one engine, so everyone can visualize in real time.”

Unity Technologies head of cinematics Adam Myhill reported that more people play Unity games than watch TV. “Computer game playing has reached such a massive scale that games are bound to influence movies and other entertainment.”

He observed that James Cameron’s Avatar had pioneered virtual production. “It wasn’t done with game engines, but was the beginning of using real-time systems to try out ideas in movies,” he said. “For directors, it’s like having a finger in every department, from lighting to animation and editing.”