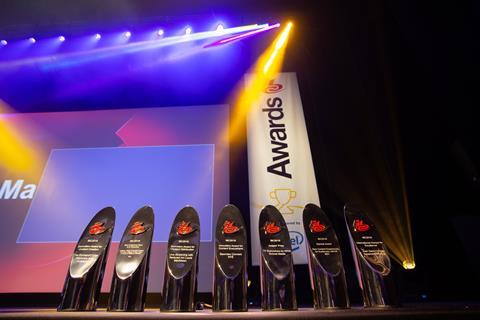 The audience at the IBC2019 Awards Ceremony met the ring-chasing Gollum and one of the world’s first female football directors, heard from youthful citizen journalists and ethical filmmakers, and were taken on a journey under the oceans.

The International Honour for Excellence, IBC’s highest honour, went to Andy Serkis, the director, producer and above all, actor. He has almost single-handedly transformed the art of performance capture, bringing real humanity to CGI creatures.

In an on-screen tribute, actor Woody Harrelson, who co-starred with Serkis’s Caesar in War for the Planet of the Apes, said: “Andy is one of the most gifted actors I’ve ever encountered. It blows my mind to see how much he can convey just in his eyes.”

The ceremony, which was hosted by BBC World News presenter Kasia Madera, was also notable for the addition of significant new awards. The judging panel looking at social impact needed three trophies to recognise the wealth of initiatives before them. Journalism for Juniors from TRT in Turkey, the environmentally responsible documentary producer Chouette Films, and a remarkable multi-platform project to protect coastal communities in India, were all honoured.

The IBC Young Pioneer is another of the new awards. It went to Vera Bichler, graduate of the HBS Broadcast Academy and now the first female football director at ORF in Austria.

The evening also saw the presentation of a Special Award to 4K 4Charity, the body that organises the Saturday morning fun run at IBC. In the five years since its inception by the late Sam Blackman it has raised more than a million dollars for charity.

Channelling creatures
Introducing this year’s IBC International Honour for Excellence, chair of the IBC Council Naomi Climer reminded the audience that Serkis started his career as a ‘traditional’ actor, performing Shakespeare and contemporary theatre and winning awards for television and movie roles.

“But he has transformed modern movie production by refining performance capture, allowing the actor to create the fidelity, the detail, the humanity of the performance of an animated character,” she said. She listed some of his most famous roles, including, of course, Gollum from Peter Jackson’s The Lord of the Rings, Caesar from the Planet of the Apes series and King Kong.

The audience was treated to a lightning review of his career, and a more measured look at the art and science of performance capture. This was a behind the scenes look at Mowgli: Legend of the Jungle, which Serkis adapted and directed – as well as playing Baloo the Bear.

“I feel incredibly honoured to have been chosen as the recipient of this year’s prestigious IBC award,” said Andy Serkis. “In turn, I must share this appreciation with the phenomenal legions of creative artists, visionaries and pioneers with whom I’ve been lucky enough to dance on this journey of next generation storytelling.”

Social responsibility
IBC’s inaugural Young Pioneer and Social Impact Awards celebrated the success of organisations and individuals who have made a positive social impact in the industry.

The first women football director at Austrian broadcaster ORF, Vera Bichler was awarded the IBC Young Pioneer award for her passion and dedication to the technical broadcasting of sports.

Bichler was a graduate of the HBS Broadcast Academy and has directed five matches from the Women’s Football Bundesliga and is set to direct a further five this year during the championship.

The judges said: “Vera has shown the expertise and tenacity to overcome considerable barriers in forging a highly successful career in sports broadcasting.

“As the first female football director, she is a true pioneer and an inspiration to others. She is set to have a lasting impact on the industry.”

Due to the outstanding number of submissions for the Social Impact Award, the judging panel created three subcategories to recognise the excellence of global initiatives forging positive change and sustainability to make a positive difference in the world.

The Social Impact Award for Diversity and Inclusion has been taken home by Turkish broadcaster TRT for its project Journalism for Juniors (J4J), an initaitve launched by the broadcaster to help disadvantage young people and refugees in Turkey to train as journalists by those working in the field.

The project VoxA Omnichannel Engagement Platform, an advanced and extensive emergency alert and advisory platform won the Environmental Impact award. It was built for half a billion Indians living in India’s coastal communities, developed by Gaian Solutions for the Government of India, Ministry of Earth Sciences, to help support those communities in case of emergency.

Ethical Leadership award was taken home by Chouette Films, an associate member of SOAS and the University of London. The project combines green filmmaking and creative flair to craft films with the ingredients to inspire social impact with the smallest possible environmental footprint.

Reflecting the changes to the industry, IBC introduced the two new award categories to shine a light of the rising talent and diversity in the work force and the projects, initiatives or campaigns that are making a positive impact on the wider worlds.

The ceremony also awarded the prestigious Content Creation, Content Distribution and Content Everywhere Innovation Awards. The Best Technical Paper award winner will be there to receive their trophy along with the winners of the IBC Outstanding Achievement Awards.

The awards was hosted by Kasia Madera is a BBC World News presenter and one of the main anchors of Newsday, the fast paced breakfast show which was named Best News Programme at the 2017 Asian TV Awards.

Remarkable new racing format SailGP took home the trophy for Content Creation. The high-speed races take place in harbours around the world, but all the production takes place remotely at Timeline Television in the UK. As well as Timeline, Whisper Films was technology partner.

Three other projects were shortlisted: Fox Sports for its new augmented reality Nascar studio, developed with Epic Games and Zero Density; League of Legends, another remote production project, this time for esports (Riot Games and Haivision); and Holokid, inserting a live holographic projection into a rock concert, planned by Vodafone in Romania with technology partners Dejero, Hawthorn Theatrical, Huawei Romania and Musion 3D.

The winner of the IBC2019 Innovation Award for Content Distribution went all the way to the bottom of the Indian Ocean. AP used remarkable optical technology to get live HD pictures from 200m down. Technology partners were Inmarsat, LiveU and Sonardyne.

The audience also got the chance to appreciate two other finalists. BT Sport in the UK not only demonstrated remote production over 5G, it covered a complete football match at Wembley Stadium, alongside technology partners EE, Huawei, Mobile Viewpoint and Timeline Television. And COPA90 brought a fresh, social approach to last year’s World Cup, aided by Base Media Cloud.

The third innovation award is for Content Everywhere. It is hard to imagine content in more places than this year’s winner, ETV Bharat. This massive collaborative newsroom – developed by Aveco, Grass Valley, Harmonic, Octopus, Ross Video and VTI – supports 5000 journalists in 29 states across India.

Pushing hard for the trophy were two other finalists: the 6K 360-degree VR application that Deutsche Telekom is developing for its Magenta service, with Akamai, Iconic Engine, INVR.SPACE, Magnum Film, MediaKind, and Tiled Media; and La Liga on Facebook Watch to the Indian sub-continent, supported by GUUD and MediaPro.

The work they are leading uses existing video codecs built into mobile phones to support complex multi-dimensional services. The proposed technique is known as V-PCC, for video point cloud coding. It was detailed in the paper Real-time decoding and AR playback of the emerging MPEG video-based point cloud compression standard.

“The paper impressed the committee with its practical analysis,” said Dr. Paul Entwistle, chair of the IBC technical papers committee. “It discusses the possibilities and the challenges still to be faced, while recognising that the goal is something consumers are actively seeking.”