The many and varied requirements of broadcasters have created demand for flexible solutions from the providers of playout systems.

There are significant differences in playout requirements depending on the level of broadcaster and, as a bit of a generalisation, the territory that they operate in. 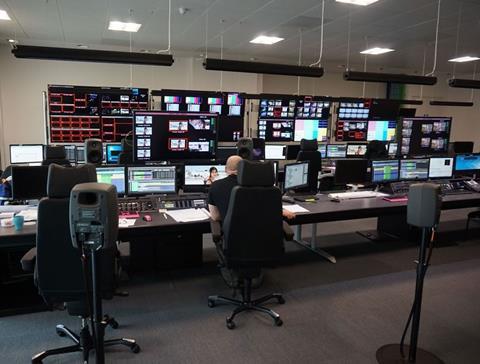 Tom Gittins, Pebble Beach Chief Executive explains: “We see the more conservative markets like the Middle East still using the classic automation software control, running on top of discrete devices for video servers and graphics. I think that is driven to a large extent by local expertise and familiarity with that kind of technology.”

SAM Product Manager for Playout and Delivery Ian Young agrees that there has always been tremendous differences in the playout environment.

He says: “The US markets have a particular way of operating and that might be different to someone in Asia Pacific.

“Also a service provider who wants to consolidate and become more of a cookie-cutter operation to keep their overheads low, operates quite differently to a national broadcaster, so playout has always been incredibly diverse.”

The move to IP is gaining traction as broadcasters’ wariness of adopting IP and commoditised IT slowly dissipates.

As it is mainly the larger users who have the ability to embrace IP, so SDI will remain part of the mix for some time says Don Ash, President at PlayBox Technology.

“IP is more about supplementing SDI than replacing it unless you have the luxury of designing an entire new broadcast facility from scratch.”

“IP is a very efficient for controlling remote devices and for point-to-point file distribution,” - Don Ash

Principle Architect for File Based Systems at Evertz, Johnathan Smith, agrees that broadcasting will continue to straddle both technology levels.

“Some are in growth phases and still looking at getting services to air. In South East Asia and the Middle East we continue to ship traditional SDI-based automation systems that look the same as they did five years ago.”

Scott Rose, Grass Valley’s Senior Director of Product Management sees something as simple as the equipment refresh cycle as driving the move to IP.

“It not so much whether it’s a developing market, but is it time for a refresh? When customers are replacing plant they are starting to look at IP and asking ‘should I be doing this with an IP-based solution?’”

IBC2017 Multichannel Broadcasters: Is IP really having an impact on broadcasting?

According to Gittins, western Europe and the US are mostly asking about IP with a deeper line of questions about the challenges surrounding SMPTE 2220-6 and 2110.

“Some of the manufacturers, and the market in general, are waiting for standardisation to be completed before knowing how to move forward.

“That is reflected in the IBC’s own interoperability workshops to help give some reassurance to the market.”

The approach to multivendor support, integrating with best-of-breed in key areas such as graphics, is not likely to radically change in the foreseeable future, but there are implications of running completely in software with virtualisation.

Playbox is looking to Newtek’s NDI (Network Device Interface) for its Airbox as a strong tool for interoperability, says Ash.

“We have always favoured open connectivity with third-party hardware and relevant software. NDI is the most promising of the various proposed protocols, being inherently compatible with a very wide range of applications and devices.

“NDI will streamline our solutions and create a more user-friendly production environment than was ever possible in the SDI world.”

Evertz’s Smith notes that one problem is that not everyone has got to the same point in the technology stack.

He says: “At the moment, you are more limited in the number of vendors that are supporting the IP and virtualising technologies – although this will change fairly quickly.”

Another approach is to integrate at the software level, an approach that Pebble Beach is exploring, says Gittins.

“You can run a best-of-breed rendering software right within our software defined channel without ever coming out to IP and back again. It’s all be done sharing CPU, sharing pixels in memory to produce the output.”

He has a project with PixelPower, and others are on the way.

“A project with a major US broadcaster wanted the two products together so they turned it into a real deployable project – it’s real projects that really make vendors sit up and take notice,” he says.

Whilst dominating the conversation in other areas, UHD/4K is not a dominant issue in a world where the majority of playout is SD.

Playout systems at this level handle SD, HD and UHD and are operating in a world which is moving at different rates, comments Rose.

“There is a lot of SD and there are people trying to work out how to complete their HD transition.”

According to SAM’s Young, an unexpected driver for higher quality video is VOD which is not dependent on dedicated terrestrial or satellite transmission channels.

”What is not proven yet is will 4K be the consumer’s preference over HD/HDR,” Young said.

But it is virtualisation and operating in the cloud – whether private or public - that is drawing the most conversations.

“We are seeing strong interest in virtual playout which follows the EdgeBox model we established many years ago,” observes Ash at PlayBox.

“Virtual playout frees broadcasters from the need to possess, operate and maintain their own hardware. The savings in space and staff overheads can be substantial, especially for a channel located in the centre of a major city.”

There are also words of warning from Young about moving to cloud – especially private cloud – as it changes so much in the operation, and from Tom Gittins on getting the commercial agreements right.

“Yes, you can demonstrate video being controlled in a linear operation but has the customer really considered the massive upheaval in every part of their business – not just the technical but also the commercial, and how they move their media.”

“I think the technical issues have already been solved, or soon will be,” notes Gittins.

“The issues that lay ahead with high value broadcasting moving to public cloud are the commercial dimensions - is it cost effective and if it isn’t reliable, who pays the bill?”