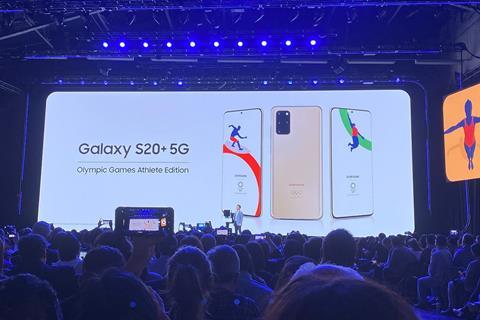 Samsung has launched its new range of flagship smartphone devices, offering the ability to record videos in 8K 24fps.

The devices are powered by Qualcomm’s Snapdragon 865 processor which supports 8K shooting and 5G.

The Galaxy S20 Plus is slightly larger, at 6.7-inches, warranting a larger battery at 4,500mAh. It also comes with an additional time-of-flight sensor.

The new devices do not include an 8K screen, however, meaning video recorded in the higher definition format will have to be viewed on a different 8K device.

Samsung Electronics head of mobile communications business president Dr TM Roh said: “As we enter this new decade, 5G will completely change how we communicate and how we experience the world around us.”

“As all three Galaxy S20 variants come with 5G connectivity, Samsung is providing a next-generation device for transforming people’s lives. With an incredible, AI-powered camera, you can capture the moments as they happen and connect more seamlessly with the people you love.”

At the “Unpacked” launch event, Samsung also announced a new partnership with YouTube. This will allow S20 users to share their 8K videos directly with the Google-owned streaming service, using the phone’s speedy 5G upload speeds to boost the experience.

It has also partnered with Netflix at launch in an agreement that sees the streaming giant become Samsung’s “official mobile entertainment partner”. The alliance will offer bonus content related to Netflix titles and more tightly integrate the subscription-streaming service into Samsung’s Galaxy phones.

“The mission of this partnership to make the Netflix viewing experience on Samsung mobile the absolute best it can be,” Netflix’s chief marketing officer Jackie Lee-Joe said on stage in San Francisco as she announced the alliance.

The partnership will see content creators given access to an S20 device to show off behind-the-scenes material, which Samsung users will be able to view for free.

Other content will also be made available through Samsung Daily – a new home screen panel on the S20 range - including Narcos: Mexico, Sintonia, Elites and Netflix is a Joke comedy specials.

8K is a leading focus for the South Korean manufacturer, which has already launched a number of 8K TVs and partnered with the 8K Association earlier this year to launch a TV certification scheme.

The decision to focus on 8K content and 5G was labelled “smart” by PP Foresight analyst Paolo Pescatore.

“Though it is still early days with 8K, Samsung is seeking to own this space with both the larger screen in the living room and on mobile devices.

“The move to support 8K is smart. Given the lack of 8K programming, expect mobile devices, not TVs, to be the driving force behind the creation and adoption of 8K content. This, in turn, will drive awareness of Samsung 8K TVs.”