The Year in Gear: Part 2

2020 in review: Part two of the IBC365 roundup of notable product launches and developments in broadcast tech in 2020 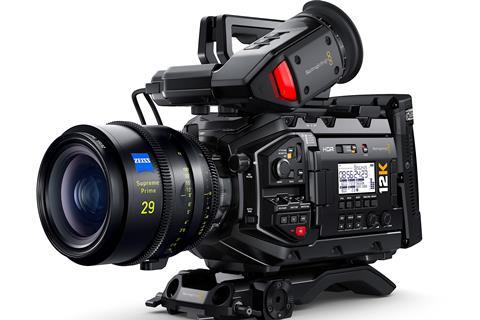 In this second part of our overview of the technology launches of 2020, we look at the wide range of new solutions and products on offer across the broadcast and film technology world.

Bringing the power of Raw to acquisition and post as part of an HDR workflow was one of the themes of the year, with both Blackmagic Design and Atomos leading the way with more accessible versions of Raw.

Atomos has been busy bringing Apple’s ProRes Raw format to a host of cameras, such as Sony’s Alpha 7S III and FX6, the new Nikon Z 7II and Z 6II, Z Cam’s compact cinema cameras and Panasonic’s S1H and S5, via its Ninja V, Shogun 7 and its latest Neon 8K recorder/monitors. Besides being editable in Final Cut Pro X, ProRes Raw is also being supported by Adobe Premiere Pro, Avid Media Composer and Grass Valley’s Edius, as well as other post software.

Thanks to its efficient 12-bit Raw workflows users should even be able to edit 12K on a laptop, “a capability that simply isn’t possible with other codecs,” the company claims. Shooting Raw in 12K should also preserve “the deepest control of detail, exposure and colour during post. Oversampling means customers get extremely sharp 8K without harsh edges,” while Blackmagic Raw is designed to accelerate 12K for post, making it “as easy to work with as standard HD or Ultra HD files”. It works with the increasingly all-in-one DaVinci Resolve Studio (included with the camera), for editing, colour correction, audio post and visual effects. 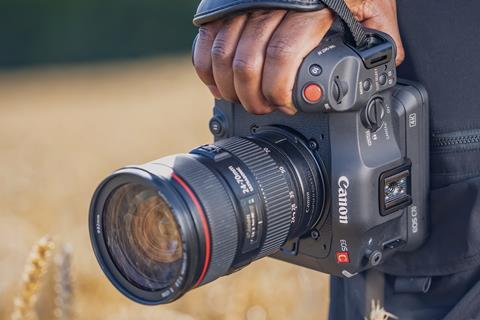 Other significant cameras this year include models from Sony, Canon and Dream Chip Technologies.

It can record four-channel audio (as a separate file) at these high frame rates (not possible on other Canon cameras). It is also the first Cinema EOS camera with EOS iTR AF X (Intelligent Tracking and Recognition), which uses face and head detection based on deep learning technology and can recognise a face even if it is partly obscured.

Blackmagic Design: ‘A capability that simply isn’t possible with other codecs’

The Dream Chip Atom One SSM500 is claimed to be the smallest high-speed broadcast camera available. It can shoot at up to 500fps in HD, with a global shutter (although it goes from recording 12-bit video at 300fps to 10-bit at 500fps). It can record up to 60 seconds at 500fps, including HDR. The C-mount camera is only 190x60x60mm in size and weighs 900g.

In camera support, Sachtler launched the Aktiv fluid head, with SpeedLevel and SpeedSwap technology that allows users to mount, level and lock the head in seconds and to switch quickly from tripod, slider or hand-held shots. There are four models, Aktiv6 and two versions of Aktiv8 compatible with 75mm tripods, plus Aktiv10 a 100mm bowl head with side-load camera plate. They support payloads up to 12kg (8kg for Aktiv6). 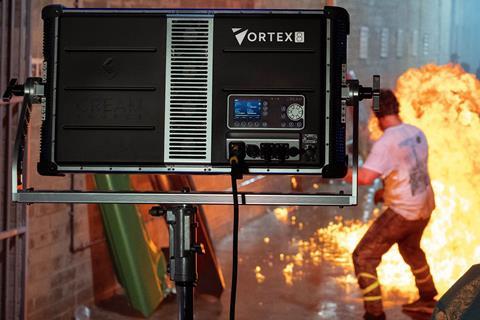 The Creamsource Vortex8 is a rugged, water-resistant multi-colour hard light with a soft edge. It produces a narrow beam angle and high light output, yielding 13,900 lux at 3m in 5600K, and being a panel light it can get closer to its subject.

It has a TLCI rating of 94 at 3200K and 96.4 at 5600K, and uses a RGBW LED system with correlated colour temperature from 2200K to 15000K (unusually wide ranging). It can become a creamy soft light with either a Creamsource Dome or DoP Choice Snapbag.

Mediakind Aquila Broadcast is designed to ease the transition towards all-IP workflows and the cloud. It includes software-based video compression, control and stream processing, at up to UHD resolution with HDR and wide codec support.

It is also claimed to offer significant bandwidth savings. It is deployable as an appliance or pure software, in on-premise and cloud-based implementations. 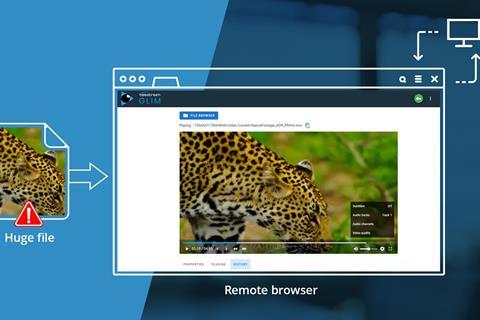 Telestream’s Glim remote media player solves the remote work challenge of hours wasted each day downloading mezzanine grade media files just so they can be played back, as well as the time spent transcoding prior to uploading.

Glim allows users to play files immediately, from a browser interface, without any transcoding or uploading delays. It supports playback, frame scrubbing, stepping and display of file properties and metadata.

“Without Glim, seeing, hearing and understanding the technical properties of media libraries from remote locations has been nearly impossible,” said Scott Matics, director of product management, Telestream. “With Glim, you can now play the unplayable.”

Interra Systems’ Baton LipSync and Baton Captions use automation to, respectively, solve critical lip sync issues and to bring “simplicity and cost savings to the creation, management, and delivery of captions”.

Baton LipSync can automatically detect audio and video sync errors, so should enable users to accurately detect audio lead and lag issues. Baton Captions automates all kinds of captioning, from caption generation to QC, auto corrections, review and editing. It uses speech recognition, and reports on any drop or inaccuracy in captions and audio, as well as compliance issues, providing broadcasters with automated options for correcting alignment and text.

Scott Matics, Telestream: ‘With Glim, you can now play the unplayable’

Imagine Communications’ Versio Control is a configurable web-based master control system that allows users to build customised context-driven control and monitoring dashboards that are specific to their operational requirements. It offers a toolkit of functional widgets that combine master control, graphics, automation and system monitoring into a single, consolidated UX framework. It can be used on-premise, remotely or in the cloud, and uses touch interaction for ease of use.

DataScouting’s new MediaScouting suite enables 360° media monitoring, to rapidly search and find actionable information in broadcast, online, social and print media. It is built for the cloud, but can also be installed on premises, and uses text analytics and automatic classification, speech and optical character recognition, advertisement, logo detection and facial recognition.

It accurately measures the bandwidth available from the server side rather than at the player, as it has better information about network congestion. It includes innovative home network orchestration that allows service providers to dynamically distribute bandwidth resources amongst different devices and monitor bandwidth at the consumer. For mobile applications, cell congestion capability enables effective management of backhaul and radio cell congestion during peak consumption. 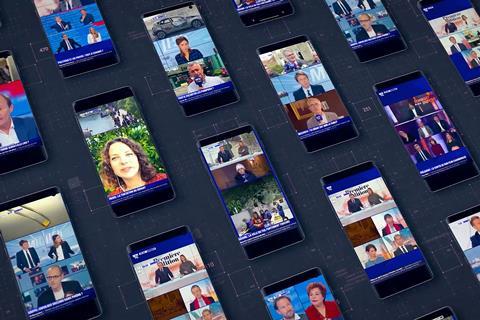 Wildmoka’s Auto ReZone addresses the increasing use of phones as the primary channel for news consumption by automatically transforming widescreen TV into a portrait mobile-first format in real time, for live, recorded or archived content.

It uses an SaaS model and doesn’t require any change to existing newsroom workflows. Based on machine learning, it can create complex compositions with rapid transitions between them.

It can target specific audience segments of any size and makeup across all services, devices and screens, and includes ad insertion, audience insight analysis (profiling households in a GDPR-compliant way) and data management.