Locked down stadiums and the dearth of live event opportunities have seen sports federations, broadcasters and brands begin conducting watch parties for fan organisations and sponsors. IBC365 looks at how watching together has evolved as a solution to keep the fans engaged.

When the pandemic forced the world into lockdowns and social distancing became the norm, technology brought a new connection, with online watch parties popping up to watch and talk about a sport or live TV experience in real time on a shared platform. 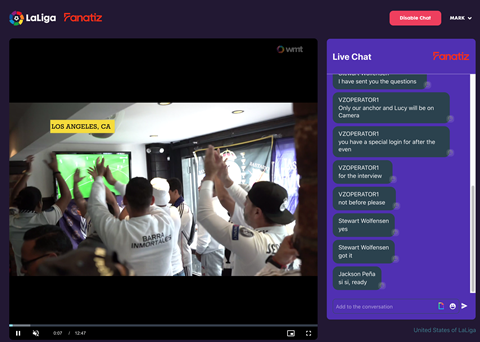 In 2020, BT Sport launched its Watch Together feature powered by Sceenic for the return of the English Premier League behind closed doors. More recently NOW TV in Hong Kong launched its Watch Party feature for this year’s UEFA Euro 2020.

“We are also powering the experience for entertainment content such as movies, series, concerts, TV shows inside the platforms of clients like ScreenHits TV, among others,” says Natalia Higuera, head of marketing and communications at Sceenic.

“NPO Samen (Watch Together) inside NPO Start (an OTT service from the Dutch national public broadcaster) has been available since the start of the pandemic showing TV series, movies and live shows, such as the Tour de France 2020 and the King’s Day 2021.

“During the Eurovision Song Contest 2021, we powered the experiences inside the platforms of the broadcasters NDR (Germany), NPO (The Netherlands), and YLE ( Finland). YLE has kept the feature for the European Football Championship and NPO [will do similar] for the Olympics 2021.”

Aser Ventures’ companies LiveNow and Eleven Sports have both made use of co-watching, with Eleven Sports working with Reactoo to pioneer the use in sports, well before the pandemic shut out fans from the stadiums and pubs.

“We first launched the Watch Together service in December 2018 at LiveNow’s sister company Eleven Sports,” says Chris Tyas, head of product at LiveNow. “The idea was to give audiences a chance to connect in a shared ‘virtual living room’ even when they were watching a live event hundreds of miles apart. Fans could either set up private rooms for friends and family or public rooms, to connect with like-minded fans. 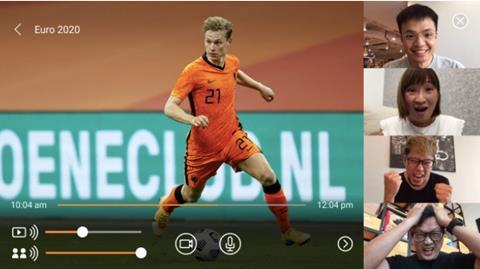 “We wanted to bring Watch Together to LiveNow since the very start and it has proved a massively valuable tool for our audiences - especially during the pandemic,” he continues. “For example, it gave music fans who were used to going to concerts with friends an opportunity to connect whilst streaming performances of Dua Lipa, Gorillaz and Maroon 5.

Behind this platform, known as ‘Watch Parties for Brands’, is a cloud-based technology developed by digital agency WMT and audience engagement company LiveLike. By combining LiveLike’s chat and gamification (such as trivia and leaderboards) functionality with WMT’s real-time voice and video technology, organisations like La Liga, and their sponsors, are able to engage with fans in innovative ways.

“For the October event we had 50 VIP customers of Verizon Wireless, so we had to be able to [support] the 50 VIPs and three influencers/VIPs at the same time,” says Andres Focil, founder & CEO at WMT.

“We can scale up - usually, our watch parties have between 250 and 300 spectators, in addition to the 50 VIPs and the three influencers“, Andres Focil,WMT

“In addition, you can have spectator mode, which does not have any video or audio concurrency, but they can chat, participating in questions and answers and polls [through the LiveLike software]. We can scale that up - usually, our watch parties have between 250 and 300 spectators, in addition to the 50 VIPs and the three influencers.”

More than 15 such events have been held so far, and participating VIP players have included Real Madrid striker Fernando Morientes. La Liga has rolled out the virtual platforms in the UK, Europe, Latin America, South America and across the globe, reaching around 10,000 users.

Sponsorship is a big factor. “As well as Verizon in the US, we have had Banco Santander sponsoring a lot of our watch parties in Spain and Brazil, and Dazn, Puma and Budweiser in Germany.”

The average audience engagement rate for the platform is over 74.5% for all WMT/LiveLike watch parties. “That’s measuring fans that want to engage in the format, as opposed to just watching the game. People who are chatting or sending questions or engaging with polls and trivia or engaging with VIPs,” explains Focil. 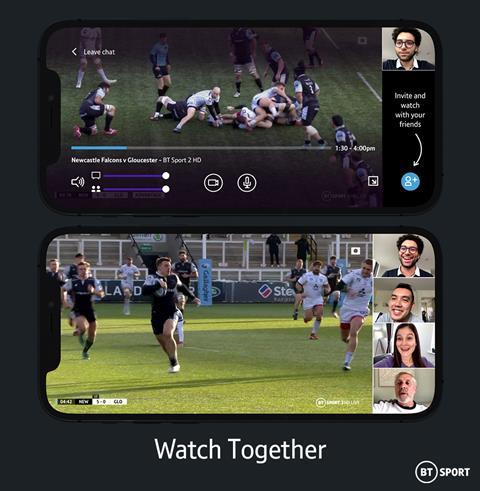 BT Watch Together: Launched in 2020

LiveLike and WMT have now had similar interest from the German Bundesliga, and Canal+ for French football, but the platform doesn’t just serve live sport. “We debuted a documentary, a docuseries from La Liga covering the entire story about Valencia football club, and the VIPs included the screenwriter and the director” says Focil. “These debuts for documentaries have had over a thousand people tune in, get engaged and ask questions.”

Other platforms also allow such VIP interaction. “We have a VIP room setting, where we invite content creators and VIPs to come on and discuss an event live,” Tyas says. “We’re working to take that engagement to the next level and give audiences the chance to engage with VIP rooms in an active way.”

“It is very important for us that our SDKs and APIs allow our clients to create the experiences their users want,” says Higuera. “The size of the online rooms can vary. We recommend having up to four users on mobile, tablets and laptops, and six users on the bigger screen so that everyone enjoys the best experience.

“Our clients can also create bigger rooms to meet and greet,” she continues. “We see this as a great opportunity for live concerts where fans can get VIP access to enjoy, meet and chat safely with their artists before a concert.

“We have seen how Watch Together increases the time spent inside platforms with people sharing specific content but then staying online to chat and scroll to the next [big] thing,” Higuera adds. “It is also a great feature to grow the audience subscription, a new ‘word of mouth’. There is more engagement and commercial opportunities for brands.”

According to CTO Aharon Yechezkel, Sceenic uses WebRTC protocols to support its delivery of real-time video. “However the secret sauce is not in the protocol, it is in creating a system that can deliver video on scale,” says Yechezkel. “For that purpose, we developed a few proprietary technologies, such as load balancers, signalling servers and elastic features, that can support scaling our streaming cluster.”

To ensure good quality of service the client can adjust the resolution of the video using the Sceenic SDK. “In addition, we developed a network monitor that gives the engineers and the users an indication of the state of the network,” says Yechezkel. “This allows the engineer to create logic that automatically reduces the resolution and can manage the user expectation – the user knows he has a bad network and can switch to another.

“From a back-end perspective we need to create global deployments of our media servers to allow the users to be as close as possible to the media server [for] balancing algorithms and routing of users,” he continues. “From the client-side perspective, it is all about the user experience – how to manage bandwidth but also to allow the engineers using our SDK to deal with applications that are in the background, rotation of the phone and smooth reconnection scenarios.”

“We want to take the experience to the possibility of being virtually next to each other,” Aharon Yechezkel, Sceenic

Another SDK, dubbed ‘Sceenic Synchronize’ helps clients with latency problems. “When friends connect for a Watch Together experience they are all on different devices and different networks [WiFi, 4G or 5G],” explains Yechezkel. “Users don’t want a Watch Together experience where someone can see that the team scored a goal before the others. With this SDK we solved this issue by connecting all players to meet in a middle point - the slowest goes faster and the fastest goes a bit slower for everyone to enjoy the best experience, which at Sceenic we call ‘Be In The Moment’.

“Latency for real-time communication should stay well below 200ms and preferably no more than 50 or 60ms,” adds Yechezkel. “As the network conditions are out of our hands, we focus on managing the video resolution and user expectations. In addition, we will soon allow automatic detection and reconnections of bad networks.”

WMT’s platform runs on Google Cloud microservices through the Google Kubernetes Engine (GKE) and uses a blockchain deployment to allow the platform to autoscale efficiently.

“A video player ingesting HLS or another feed and pushing that through adaptive streaming will be one microservice while controlling audio and video concurrency for a video conferencing tool will be another,” says Focil.

“What’s great about this system is that it’s allowing us to manage those containerised applications, being able to map out that cloud computing effectively. We’ve been doing that essentially through the blockchain, upscaling and downscaling based on demand.” 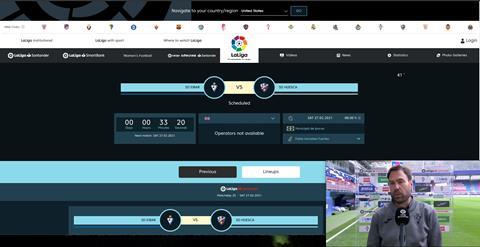 As an example Focil points out the cloud-based video conference tool, despite having to manage a lot of concurrent audio and video, will never have such a high compute load that it impacts the system. “Anytime it triggers past 25 CPU [demand], it will auto scale, bringing in a new Kubernetes cluster and a new node that’s going to allow us to give the best experience, always creating a nice low latency environment,” he says. “It’s a cost-saver, it’s a simplicity of understanding where all of your different services are, and from an efficiency standpoint, it’s also incredibly quick.”

Not every broadcaster covering a game has the same components, such as an encoder to manage HLS or adaptive streaming, or even a large bandwidth capability.

“We are in a wide variety of different places: Russia, Japan, the US, Brazil, Indonesia, and so on. Our video platform is essentially normalising and standardising all [contributions]. If the participants themselves are on a low latency system where they don’t have necessarily the best connection, we want to make sure that that experience is great.”

Security of content is handled by running the events on an invite-only basis. Users need to respond to the invite, create an account and log in to be able to experience the entire watch party. “That’s the way we protect the rights holders, to be able to assure them that that signal is not going to be rebroadcast or pirated,” says Focil.

The watch party concept has proven its worth, and adopted widely by the streaming giants, but Sceenic, LiveNow, LiveLike and WMT are all looking at ways to add value and revenue streams. For Focil it’s around analysis: “If you have a live game going on you can annotate and make comments, so the next level from that perspective would be integrating stats. That plays into sports betting, so you could integrate that into that system too.

“Outside of sports, debuting content, engaging with folks and getting a better story around it could work for any format. It could be a nice storytelling opportunity for film, similar to the Sundance festival format but just from a digital perspective.”

“We’re working on a host of new initiatives to make the service even more engaging,” says Tyas . “For example, giving fans the chance to record sections of their Watch Together room, clip them off and share them on their social channels.”

Augmented reality is the next step for Sceenic. “We are currently working on AR, partnering with Tech Mahindra in 2020 to develop Watch Together into a new [level],” says Yechezkel. “We want to take the experience to the possibility of being virtually next to each other - going for a walk with your mum, sitting next to your mate.

“We are also working with the fitness industry, to help them go beyond live-streaming classes using Zoom and similar, to bring classes into their apps and platforms while allowing their members to train virtually alongside friends and family with Watch Together.”