The WBU unanimously approved the full suite of SMPTE ST-2110 suite of standards during a union meeting in Croatia.

The standards suite will act as an important first step in broadcasters’ migration towards a fully IP-based infrastructure, the WBU said in its announcement. However, the Union warned that more work needs.

It pointed to additional work required to complete and promulgate standards in configuration and monitoring, security, discovery and connection, as well as timing and synchronization for IP production systems. 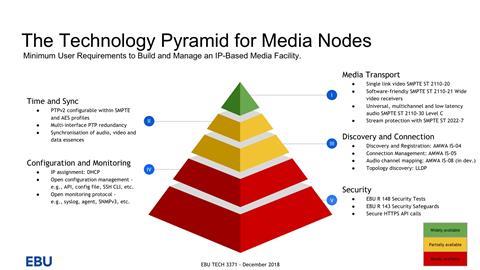 “Broadcasters planning the move to new IP production facilities for Television or Radio should engage manufacturers with the Technology Pyramid for Media Nodes and ascertain their degree of compliance,” said Michael McEwen, Head, WBU Secretariat.

“Further, the missing standards need to be completed as soon as possible so that broadcasters can make the important migration to IP with the required assurance.”

The Media Nodes Pyramid was detailed as part of the EBU’s Tech 3371 document, which can be read here, and aims to set out the minimum user requirements to build and manage an IP-based media facility.

During a recent interview with IBC365 Antonio Arcidiacono, the director of technology and innovation at the EBU, described some of the Union’s ongoing projects with IP media and 5G.