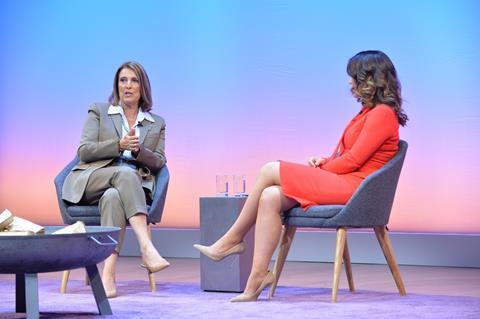 ITV chief Carolyn McCall opened today’s RTS Cambridge Convention by arguing that one of the broadcaster’s greatest assets at a time of political upheaval and digital disruption is the trust the public has in its news and current affairs.

“Shifting viewing habits, developments in technology and the rapidly evolving competitive landscape are having a fundamental impact on our industry,” acknowledged McCall, who noted that broadcaster on demand services alone have over 20,000 hours’ worth of programming to choose from and said that last year UK viewers watched over 90 billion hours of TV.

“Amidst the change and uncertainty, there are two things we can be certain of - that viewers and customers are looking for creative, trusted producers and broadcasters to help them both navigate and understand the world in which we are living and to help them escape from it into other dramas.”

McCall singled out news as one of ITV’s greatest assets: “Trust in TV news is remarkably high – higher than all other media and, of course, much more valued than the news provided by social media.”

“In fact, in an era of fake news and misinformation, the importance of the news provided by public service broadcasters has never been more important to our democracy.”

She cited a new news service, The Rundown, launched by ITV this week aimed at teenagers, who often get their news on social feeds.

“We asked that generation about ITV News. We found that they have trust and respect for our news but felt that it was for their parents.”

The Rundown will be produced and delivered by the ITV news team but distributed on line and through social media channels. The Rundown will be optimised for Instagram and will also be available on YouTube and ITV’s website. It will summarise the key news stories of the day in short clips - with the option to swipe to find more detailed information on ITV’s website.

“But many people are also in the rapidly emerging converging world – where, for a growing minority, broadcast linear TV is as outdated as the iPhone 4,” said McCall, explaining that every month 80% of all households in the UK watch VoD in one form or another.

“The challenge for all of us - in business, in government and in regulation - is to strike the right balance in what we do between these two worlds.”

She described ITV’s strategy in the new landscape as “More Than TV.” McCall said: “This means we will increasingly be a digitally-led entertainment and media company that creates and brings our brilliant content to audiences wherever, whenever and however they choose.”

McCall also indirectly the addressed the criticism that ITV has faced following the suicide of a guest on the Jeremy Kyle Show, and the suicides of two former Love Island contestants.

“Our shows are all the better for the talent, energy and diversity of the members of the public who take part in them, but we need to ensure that they also feel positive about their experience.

“The only way we can build trust in how we do this is to be open and honest about what we do and to demonstrate that we care for the physical and mental health of everyone we work with, with a strong framework. We at ITV are committed to working across the industry – including other broadcasters, PACT and Ofcom - to share best practice and continue to strengthen and evolve our processes.”

McCall also said that the biggest challenge for ITV in the coming months is the launch of BritBox, its streaming joint venture with the BBC which British TV programming for £5.99 a month.

“It is exciting because it is distinctive,” said McCall, who explained that the service would be very different to offers from streaming services like Netflix or the upcoming Apple TV+. “If it was like other streaming services it would not work.”