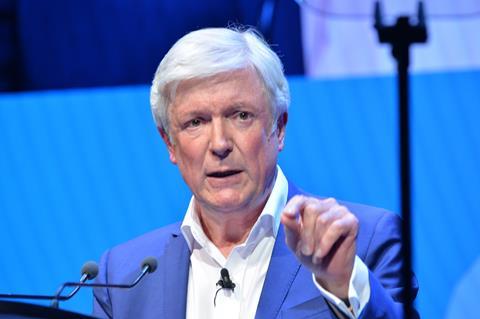 Tony Hall: “I want the BBC to be bigger and more out of London”

BBC “iPlayer is going to be total TV”, said BBC director general Tony Hall today, spelling out his plans for how the corporation can meet the challenge from the streaming platforms.

Hall added: “It’ll offer the very best of the BBC – all in one place – playing to our strengths: our liveness, the breadth of our genres and storytelling, the fact that we’re both local – and global.”

In comments that were trailed earlier this week ahead of his RTS Speech, Hall explained that the move to beef up the BBC iPlayer comes amid a “second wave of disruption” to the market. The first wave saw the rise of Netflix, Amazon and Spotify “market shapers that fundamentally changed audience behaviour, often taking on huge losses or massive cross-subsidy.” The second wave, he added, will see a range of new entrants entering an already crowded market, such as Disney and Apple.

“I believe this is a huge opportunity for people like us. In this market, services that are distinctive and different will stand out.”

Hall said that in the space of a year iPlayer’s reach to young audiences is up by a third. “Time spent with it is up across the board too - and that’s before we roll out our full plans for extended availability and exclusive content.”

Hall said the same pattern is emerging for audio, explaining that its fledgling BBC Sounds platform now reaches nearly two million users a week. He said that the BBC aimed to make Sounds “the place to discover music…We want to add new streams that showcase the full breadth of music that we offer.”

Hall also hinted that he wanted the BBC to move more of its workforce and offices outside of London in a bid to better reflect the UK.

“I think the challenge of a fragmenting and a polarising country needs an even bigger response. I want the BBC to be the organisation that is most fully embedded and distributed around the UK …that best reflects the different communities of the UK in all their richness and diversity,” said Hall.

He noted that 10 years ago a third of the BBC was based outside London and two-thirds was in London, and that the balance today is 50:50.

“I want us to think bigger. Imagine a world in which the BBC moved still more out of London. We could be really radical here … Now I know all the risks. It would take time. It would cost money. It could be hugely disruptive. But what an enormous creative and operational opportunity.”

He said another area of upcoming “significant change” would be in local radio, with changes set to be announced in the autumn. “Other local media is retreating, leaving great swathes of the country unserved and unreported…I’ve always believed in local radio, and I want it to thrive.”

He also set out how he thought the BBC could be successful globally amidst the new wave of competition.

“I believe we’ll do it by doing something different: by being the best people to tell the stories of the UK to the world. And by telling the ‘world’s stories’ to the world … but with a distinctively British set of values.”

Hall added that the BBC must find new funding partners and new strategic partners to do this.

Hall also stressed the importance of the BBC’s news operation as a source of trusted information. “I want the BBC to help make the UK a focal point for the fight-back against disinformation and propaganda.”