Virtual reality (VR) and augmented reality (AR) smartphone headsets will grow globally in popularity and success over the next five years and beyond. 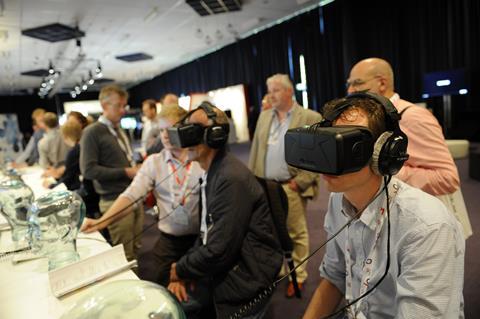 VR and AR headset adoption has had a relatively slow start but the trend is upward with market watcher CCS Insight predicting 14 million smartphone VR headsets to be sold in 2017 globally, rising to 25 million in 2018.

Ben Wood, Chief of Research at CCS Insight, said, “Headsets designed for smartphones are the entry point for most consumers when it comes to virtual reality. Google’s Cardboard devices and Samsung’s Gear VR headsets have been the early market makers in this area.”

But by 2021 the market for dedicated VR headsets is expected to be worth $7.7 billion.

Big players in the virtual reality headset production including HTC, Oculus and Sony have dedicated VR headsets which deliver higher quality experiences compared to the smartphone VR headsets on the market. However they have not been as successful as anticipated. 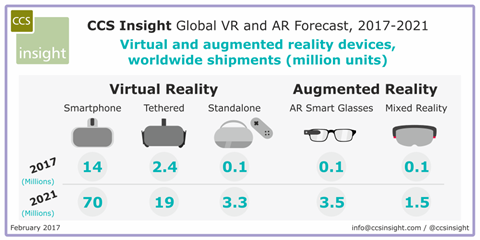 “2017 will see the emergence of untethered solutions that will be more immersive than ever. Audiences will have access to a more diverse range of ever-richer content and experiences that we believe will further boost the market. The proliferation of VR experiences in theme parks, at cinemas and in other locations such as car showrooms and travel agents offering ‘look before you book’ experiences will only serve to educate users on the potential of the technology” Wood said.

CCS Insight’s global forecast estimates the combined smartphone VR headset and dedicated VR device market will be worth $1.5 billion in 2017, with this figure rising by 2021 to $9.1 billion.

Despite the dedicated VR devices contributing to only 24 per cent of unit sales the higher cost of these headsets will account for approximately 85 per cent of total market value.

Wood commented that there is, “no doubt that dedicated VR headsets can be a tough sell. The complete package of the headset and a high-end PC is out of reach for most consumers and even the PlayStation VR, which can be used with the PS4 games console, has failed to meet expectations.”

“There’s a lot of work to be done on all aspects of the experience, but we still believe there’s tremendous potential” - Ben Wood

The company forecasts that 2019 will be the start of significant unit sales for dedicated AR devices, after a relatively slow start. It is expected 1.5 million units will be sold in 2019, rising to 5 million units by 2021, with a total market value of $2.5 billion.

Wood said, “although there are numerous very promising field trials underway, mass deployments of AR devices remain elusive, with a mere 100,000 units sold in 2016. The focus on enterprise uses and vertical market opportunities means longer sales cycles, exacerbated by the complexities of integration and compliance in workplaces. We don’t expect meaningful sales of AR headsets to start until the early 2020s”.