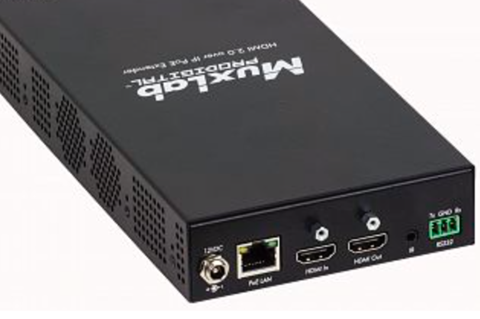 With this new transceiver, AV can be delivered in one-to-one, one-to-many and many-to-many configurations when riding on the IP-based network. HDMI sources and displays can connect to the transmitter and receiver from up to 100m away from the Ethernet switch using CAT5e/6 cable for added flexibility. A directional IR port and an RS232 port allow for the remote control of end devices, while two-channel audio can be inserted and extracted separately.

Due to its ability to be configured as both transmitter and receiver, the device offers a convenient way to build a custom IP-based system. Integrators can swap out or in as needed to build a small or large distributed IP-based system. Provided the bandwidth is supported, a multitude of devices can be combined in various ways, all operating on the same Ethernet network.

The new extender uses JPG2000 compression that results in a 4K/60 signal delivery at 16ms, approximately one frame latency. This means that it is suited to commercial applications including classrooms, digital signage, boardrooms and medical facilities.

When all devices are connecting sources to their displays, integrators can install the MuxLab ProDigital Network Controller (model 500812) to automatically identify all IP-based devices, then configure and control the entire system via a user-friendly interface. This controller works hand-in-hand with the MuxControl app, which is available for both Android and iOS systems, making the entire AV system accessible from anywhere using a smart device.