CTV and Telegenic rebrand as EMG

At a special event this week, broadcast service provider EMG Group announced that CTV and Telegenic will now operate under the EMG brand. The OB companies, both with a 40-year heritage apiece, informed their respective workforces of the consolidation before releasing the news to their client partners and the press. 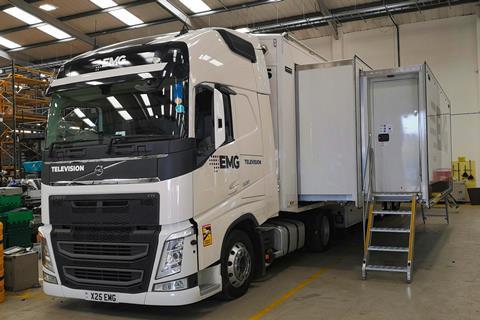 Keep on trucking: UHD trucks in the new EMG branding stand ready in the High Wycombe HQ of EMG UK

As separate brands, both companies were already part of the EMG group - CTV was acquired by EMG in the mid-2000s, while EMG acquired Telegenic in 2019 – but retained their historic identities. This consolidation “delivers numerous synergies that will enhance the market value of EMG and deliver a stronger and more dynamic single entity”, according to the group, adding that as EMG has seen record growth the rebranding of CTV and Telegenic “prepares the ground for an even stronger period of development for the business”.

CTV delivered its first OB truck back in 1983. Almost 40 years later, CTV’s fleet had grown tenfold, covering major events all over the world, and delivering technical and creative solutions to productions across all genres. A significant portion of CTV’s crew of over 100 professionals have been with the business for well over a decade.

“As we start this new journey, they know that when we join together, we create something more powerful than all of us,” Peter Bates, EMG UK

Telegenic was founded in 1981 and is synonymous with several technology milestones, as well as being well known for its motivated and talented team. Operating a fleet of 15 OB and production trucks, it employs around 100 people across production, admin and management

Made up of 20 companies around the world, EMG has a diverse range of studios and with one of the largest fleets of mobile trucks in Europe is a valued partner for major international events, including sporting (The European Tour, Tour de France, Ryder Cup, FIFA World Cup, UEFA European Championships and Formula One), live shows (Eurovision, MTV Awards, Brit Awards and Royal Events), and entertainment‐based shows (The Voice, Masterchef, The X‐Factor).

“It takes a special kind of togetherness to bring these major events to the watching world,” says Peter Bates, CEO, EMG UK. “Our teams of experts work behind the scenes to capture events live and broadcast them to an expectant audience. These are people whose passion for what they do is matched only by the passion their work invokes. As we start this new journey, they know that when we join together, we create something more powerful than all of us.” 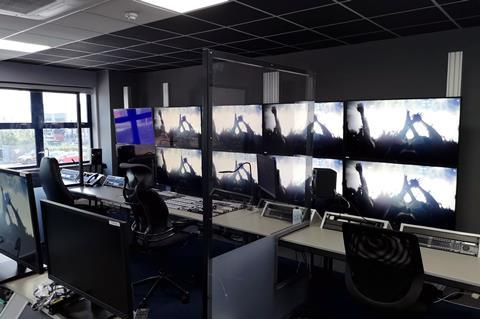 Remote production: One of the remote galleries at the High Wycombe HQ of EMG UK

The consolidation is seen as a removal of the barriers between divisions to deliver a stronger, more experienced and refocused EMG. This group aims to capitalise on its cutting-edge Remote Operations Centres (ROCs) more effectively, in High Wycombe, Buckinghamshire, BT Tower in London, and BT Sport, also in London, to contribute to the development of remote production in the market and move further towards an IP-led future.

“I’m really excited about formally welcoming CTV and Telegenic into the EMG family,” says Shaun Gregory, CEO, EMG. “They are both hugely respected businesses that have delivered some of the most compelling content to audiences around the world. EMG UK will be able to access a whole new range of products and services, further develop its ‘remote strategy’ and benefit greatly from the financial stability that being part of a group offers.”

“Both CTV and Telegenic [throughout] their history have been recognised for innovation and talent,” says Hamish Greig, Deputy CEO of EMG UK. “OB is actually all about delivery and keeping the client happy. It’s also about finding new ways of delivery, as markets change, as technology changes and as finances change. We’ve had the technical teams that have actually [carried out] the delivery. With 40 years of experience that’s a lot of different teams. We have people who worked on our productions 35 years ago, working with someone who’s just come out of university. So, you have that breadth of experience, but you always have the new talent coming through as well, which is foundation of any company.”

“It’s a cultural shift. If you’ve got the same brand, that’s a big step forward to actually operating as a group,” Peter Bates, EMG UK

CTV and Telegenic employees in the UK and US will now work for EMG and continue to be based in High Wycombe and Atlanta, Georgia, respectively. For the time being, some CTV golf trucks will retain their traditional and distinctive green livery, predominantly used when broadcasting live from major golf events.

Telegenic’s US branch in Atlanta is also operating under the EMG flag. With these companies under the EMG brand, all major entities in the group are now rebranded. The company is active with the EMG brand in the Netherlands, Belgium, France, Germany, Italy, the UK and the US.

As part of the transformation of EMG, the international sales branch will be further strengthened. Eamonn Curtin has been appointed International Sales Director in the EMG Group. Angela Gibbons succeeds Curtin within EMG UK as Sales Director of EMG UK. Both will continue to be based at EMG’s UK HQ in High Wycombe. 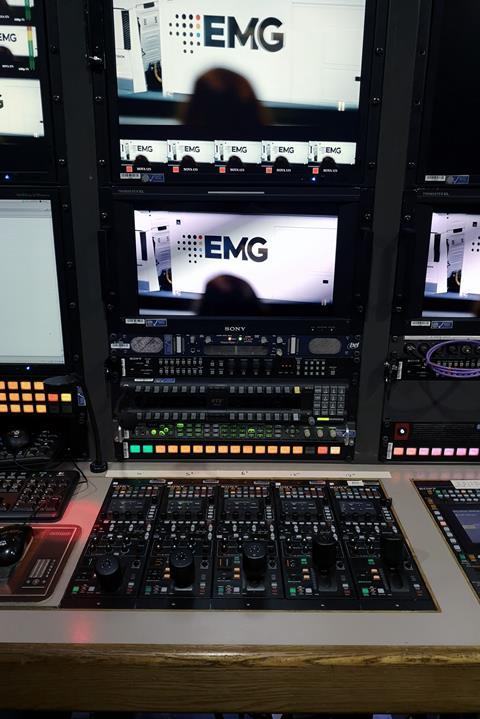 Vision On: One of the technical stations inside an EMG OB truck

As for CTV and Telegenic, Greig doesn’t believe that the disappearance of two such high-profile brands will affect the standing of the company in the live production sector.

“I think the most important thing is the delivery and the communication and the relationships we have with our clients; none of that’s changing,” he says. “It’s the same people. It’s the same departments, it’s the same delivery. Personal contact in OB is everything. Every production company, I think, needs their go-to person, whether it’s technical, or event-orientated, and that will not change. If anything, it just gives us more of our in-family resource to be able to deliver. We’ve got more resource, and we’ve got more people. In fact, what they’ll have is an enhanced service.”

The enhancements include an EMG group transformation - codenamed Aurora - across eight key areas driven by new hire Eric Kearley as Chief Transformation Officer. As well as focusing on culture and values, including diversity and sustainability, these areas include more remote production and new products and services, including streaming, graphics and post production.

“In the UK we’re very associated with a niche part of the production workflow, just the live capture,” Bates continues. “What we’re finding is that clients want more end-to-end solutions, they want a one-stop shop where they can go to one supplier and not outsource to many.

“We have the scope to grow in that area in the UK; the Netherlands already has a comprehensive range of services and with the right connectivity, and we can leverage some of that - we can have post production hardware in the Netherlands, but controlled remotely here [in the UK].” 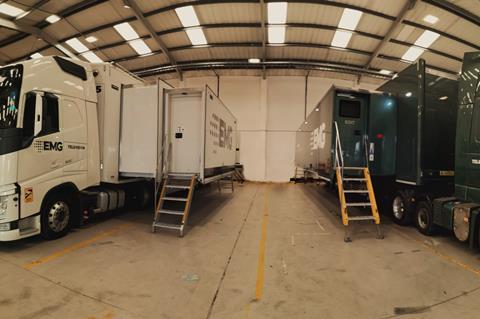 EMG trucks in the High Wycombe HQ of EMG UK

In terms of challenges with this EMG-wide consolidation, Bates feels the biggest is breaking down the barriers that existed when they were a group of individual companies. “They had their own brand, their own workflows, their own customer portfolio,” he says. “Occasionally, the group would combine and deliver on the big international sporting events, but whichever country was given that event to cover, they had to try and shoehorn it into their own calendar of events.”

“The underlying workflows are very different, because the nature of the work is very different,” adds Bates. “For example, a lot of CTV was long-form, multiple days [of work], while Telegenic was normally a day, in and out.

“But they’re all passionate, and that’s consistent throughout the EMG companies. Shaun’s biggest drive is to create a kind of group ethos and stop us operating as individuals. For me, it’s a cultural shift. If you’ve got the same brand, that’s a big step forward to actually operating as a group.”