Discover how NDI is being used to facilitate live and remote productions, with insight from leading users and tech suppliers.

The topic of NDI (Network Device Interface) was the subject of IBC’s NDI - Adoption and Implementation webinar, which spurred considerable interest from the broadcast community. 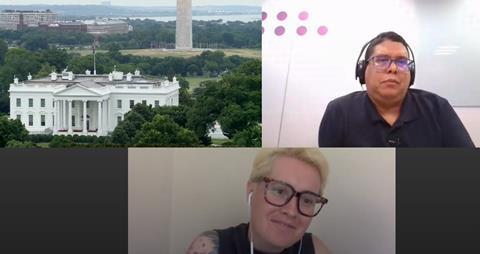 As a new technology, NDI has achieved impressive traction throughout the broadcast and media industries in a relatively short time - it was launched at the IBC Show just seven years ago. Now on the fifth release, NDI 5 (introduced in July 2021), the open-source protocol and its ability to deliver high-quality, low-latency video has made it an increasingly popular choice for live production.

Indeed, one of the top questions on the webinar was around the value of NDI as a solution for remote production setups, a question that both guest speakers - firm advocates of NDI in the real world - were keen to answer.

A live example of NDI

Wesley Dodd, CEO, Celebro Studios, used a live example, pointing out that he was speaking from a studio for the webinar, whereas the other panel members were using webcams. But thanks to NDI’s integration with platforms like Zoom, Microsoft Teams and Brightspark, the experience was seamless.

“The way that NDI integrates to those platforms is incredibly useful because you guys are on a webcam. I’m not. I’m in a studio and being able to do that makes a huge, huge difference.” He continued to point out the rising tide of manufacturers integrating NDI into products, in particular camera systems. “There [are] lots of other camera systems now that integrate NDI. The Panasonic cameras, for example. And being able to put a Panasonic camera or pan and tilt camera in somebody’s home and to be able to pull that in via NDI and control the camera as well. That’s incredibly valuable.”

Dodd also pointed out that NDI’s ability to remotely operate those camera systems can be incredibly useful in remote production setups, again demonstrating this with a live feed from the US White House. “My White House shot is in the background, so that is a great example of NDI in use. That [live feed] is being pulled directly across the Atlantic at the moment via NDI. I think remote production is one of the really big areas where NDI can have an advantage and, of course, it’s going to be much better quality than what you’re going to be able to do on some of the traditional consumer base platforms.”

A final point was the range of low latency video streaming solutions that now support NDI to transmit live video feeds across the public internet. “Now, there’s lots of different ways of doing that,” said Dodds.

“So for example, I’m talking to you now via NDI and I’m hearing you via NDI and I’m seeing you via NDI and that’s something that really a lot of you have probably started to use NDI for. So, whether you’re using Zoom or Teams or Meet, the ability to take the output of the studio like this one, and insert that directly into the feed via NDI is absolutely invaluable.”

“There’s VPN and all kinds of things, but there also are various products that do that job for you. So, some of you out there who are NDI users will know a product called Medialooks, which is a great system for sending NDI across remote locations. Sienna, of course, is another big manufacturer of that type of equipment, and we’re seeing lots of others as well. All kinds of operators. I know LiveView now integrates very well with NDI, so it really is transformative…”

Helio Eufrauzino, Media Solutions Specialist, Globo, agreed. “I would say, to complement that, we can combine NDI and web RTC. In order to feed the outputs of a local camera to our remote production with a higher quality, we needed to convert NDI into SRT’s ARQ protocol. If we combine this kind of proposal, we can have an entire ecosystem, capable of producing remotely - besides the PTZ control of the cameras. It’s a very impressive feature and makes the system much easier to operate.”

The question of interoperability

A particularly popular question among viewers was regarding interoperability, which has historically been a point of contention, especially in mixed NDI/Dante networks.

Wesley Dodd was bullish about interoperability and integration: “The interoperability between NDI and Dante now is incredibly powerful. We’ve been doing stuff where we’re sending out a stream of NDI and putting different languages on different channels of audio, and then at the other end just selecting which ones we want to go into the stream. That wasn’t possible or wasn’t as easy early on. But it’s been great to see how NDI has developed and has listened really to the challenges that we’ve faced and actually addressed them head on and come up with great solutions. And I think that’s continuing.”

With the ecosystem of NDI-compliant products still expanding steadily, the inevitable question arose around the competition between NDI and SDI. When, for example, will NDI take over? Dodd took a pragmatic view.

“It is a good question. I think it will [take over] for some people. I think there will be some facilities and some usage cases where I can see [it happening]. If we’re looking at some of the tools around now, for a small studio, and you’re going to have five cameras go into a Tricaster, then I’d say we’re already there. You don’t need SDI. There’s always going to be something very nice about having something physical, but NDI will replace a lot of SDI. I think it’s happening now. If I look at my own facility, NDI has probably eliminated the need for, maybe half of my SDI, particularly around monitoring. So, it is already happening, but it’s going to be at different speeds for different industries.”

Asked the same question, Eufrauzino was slightly on the fence. “I think we need to have SDI, to leave SDI for our higher-level production at the production sites for [our] OTA channels where we have a lot of people watching that content. About using NDI for productions such as interviews, talk shows, and inside the cloud, NDI is totally available, it’s totally fine [for this purpose]. It could totally replace SDI in the future. But just for the moment, we need to leave SDI for the premium content - that’s the point.”

To get the full detail on NDI-implementation in the real world, including insights into ‘industry-standard’ workflows for NDI-based live production, watch the webinar replay: NDI - Adoption and Implementation.