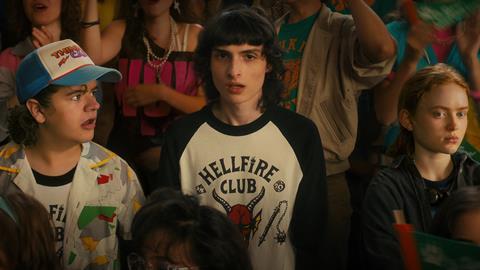 Stranger Things 4 - Behind The Scenes

The fourth series of supernatural drama Stranger Things goes deeper into the horrors of the Upside Down as its young adult characters grow out of childhood. 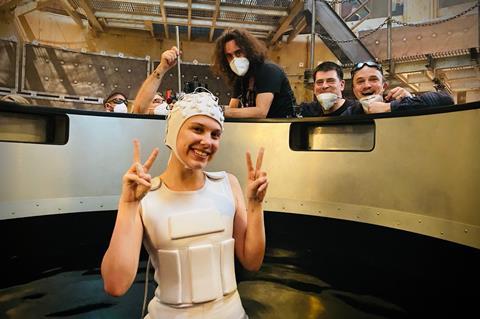 “The nature of the script is more psychological and each of the episodes builds toward a horrific climax,” says Caleb Heymann, the director of photography who shot all but two of the nine episodes. “We were not afraid to get a little over the top.”

In contrast to season 3 which was largely set in the colourful and neon-lit Starcourt Mall, the tone of the latest run is sombre to fit the story arc of the kids maturing.

“Visually, we are leaning into the nostalgia of the 1980s horror movies that we grew up with. Nightmare on Elm Street with a little bit of Exorcist and Hellraiser thrown in. For example, using shafts of unmotivated light through windows. If it looks cool, it looks cool.” 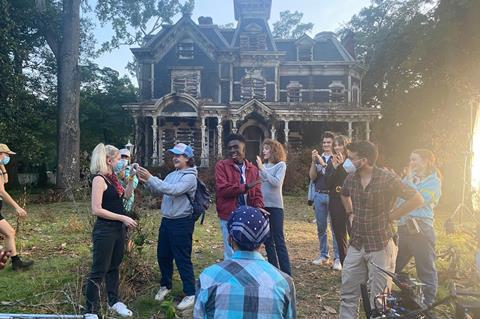 Matt and Ross Duffer, the twins who created the show and direct most of it as The Duffer Brothers, were born in 1984. While this was too early to have experienced life as teenagers in 1986 when ST4 is set, they are clearly enamoured of its pop culture.

The films of Steven Spielberg and his production studio Amblin (E.T, The Goonies) were a major touchstone on the design of their show to date. The soundtrack of Stranger Things 4 is also laden with pop hits of the era (Falco’s Rock Me Amadeus, Kate Bush’s Running Up That Hill) and nods to movies either overtly (Jaws and Tom Cruise posters) or more subtly (the basketball scenes, for example, recall Hoosiers from 1986).

“There are some references to Fast Times at Ridgemont High (the 1982 comedy was also key to Season 3’s depiction of the Starcourt Mall), WarGames (1983) and Dazed and Confused (Richard Linklater’s coming of age drama from 1993). But we seldom need to underline it by also doing the same thing with lighting or colour palette,” Heymann says. 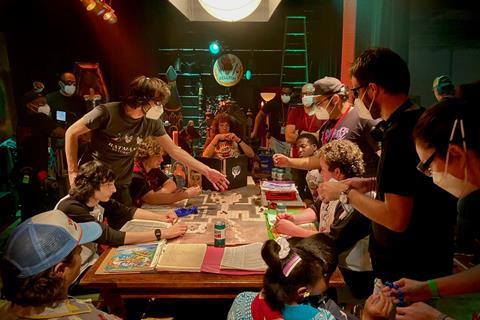 “I feel there are subtle nods to ‘80s films more with the horror scenes. We go a little Evil Dead with our Sam Raimi references which is pushing the show further in that direction than ever before.”

For the sequence at the end of episode 1 (in which local cheerleader Chrissy hallucinates) there’s an explicit recall of A Nightmare on Elm Street 3: Dream Warriors (released in 1987) down to the banquet of rotten food.

Heymann has form in translating period looks and horror film references to the screen. He shot the Fear Street trilogy (set in 1666, 1978 and 1994), the slasher film series for Netflix directed by Leigh Janiak – who happens to be the wife of Ross Duffer. The DP also shot second unit on two episodes of Stranger Things 3 where he got to know the brothers. When invited to take charge of ST4, with fellow DP Lachlan Milne ACS, their task was to maintain visual continuity while reflecting the show’s darker themes. 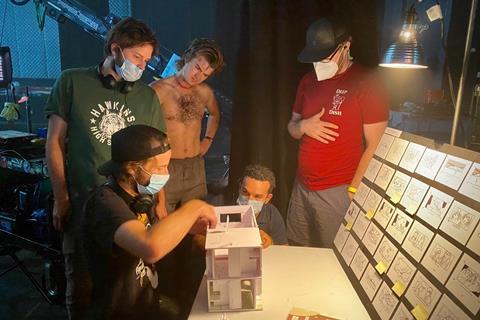 Behind the scenes BTS

“The visual language is part of the DNA of the show and fundamental to the way shots are framed,” Heymann says. “It has a lot to do with camera movement and the Duffer Brothers’ hunger for big push ins and scenes that begin with some movement, like a whip pan or a whoosh that can develop into a moving master. The close ups tend to be shot on wider focal lengths, so you feel a lot of the background as well as the proximity to the actor.”

“There are so many new locations [in Stranger Things 4], it was really an opportunity to broaden the palette.”

Nonetheless, they opted to switch from RED, the series’ established camera, to ARRI Alexa, while retaining the large format sensor. “Each season has been on a different flavour of RED sensor, so in that sense a change to the colour science isn’t new. But ultimately it came down to the fact that myself and Lachlan were more used to shooting on Alexa. We shot tests and found the Alexa just had that little slight edge when it came to highlight retentions, and I just liked what it was doing to skin tones.”

He shot scenes typically with one Alexa Mini and a pair of Alexa LF or two Alexa LF and a Mini using Camtec Falcon Full Frame primes.

“On S3, Tim Ives ASC used the RED Monstro and took the show into full frame for the first time which was a great decision. It meant we could shoot more on a 28mm or 35mm and expand the field of view to shoot close up and yet see a lot of the world at same time.”

That’s important since much of the reported $30 million per episode budget for ST4 is spent on detailed sets built at studios in New Mexico and Atlanta, as well as location work in Lithuania (doubling for Russia and Alaska).

“The bigger sensor is also a way of resolving detail in the shadows and the Alexa gave us what we wanted in separating colour tones,” says Heymann.

This is TV on ’another level’

Continuity of the show’s look was maintained with Company 3 colourist Skip Kimball, who has been with the show since its start. “Skip was able to recreate that feeling of richness and almost amber skin tones that he created on previous seasons,” Heymann explains. 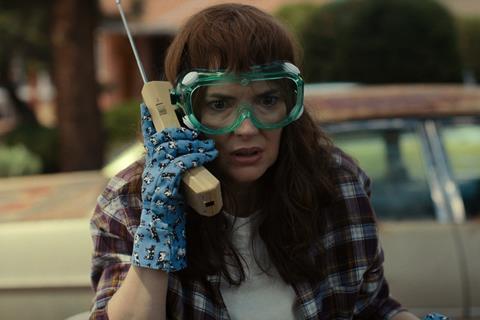 “There are so many new locations it was really an opportunity to broaden the palette. Scenes set in California have [their] own palette to show more direct sunlight, whereas scenes in Russia are at the other end of the spectrum. For the prison scenes (featuring Hopper/David Harbour), we worked with older sodium fixtures flickering with green fluorescence, but with the overall base being blue. There is so much going on in Hawkins (the fictional town in Indiana) that we run the gamut of colour temp, although there is the signature cold palette underlying each location.”

“No one has got time to watch rushes on a show like this. It’s coming at you so fast; I didn’t even see dailies. You are always looking forward.”

Fans will be well aware that shooting on the show, and its subsequent release, was delayed due to Covid. Photography began early 2020, halted in March and resumed in September. Heymann worked the next 11 months solid shooting supersized episodes, some of which are feature length (the final two episodes dropping in July clock in at 1hr 25 and two and half hours respectively).

“Even the shorter scripts were 74 pages, so from the get-go it was clear that this was TV on another level,” Heymann reveals. “The final eps were 115 pages with 300 scenes all with some element of complexity to it, which is like shooting a big movie but with a TV schedule.”

The shooting delay meant Lachman had to leave for other commitments and Heymann took over an additional three episodes. That meant keeping track of a complicated schedule that could see scenes shot for any or all of six episodes in a single week.

“We had to be ready to tackle any of these 800 pages of script,” he remembers. “The Duffer Brothers have this uncanny ability to know every line they wrote, so they had a very clear intent of what was going for every scene. But I needed a different method to manage the sheer quantity of production.”

Heymann used spreadsheets, annotated for each line of script detailing camera movement, use of any special equipment, blocking of actors, and colour-coded for different storylines.

“It can be hard to orientate yourself when you’re moving between so many different storylines so this method allowed me to go back and remember where in the story we were. To back this up, we had photo galleries of every single setup organised by story order. It had thousands of still images in thumbnail, so anyone could go through an episode and pull up the colour palette and see precisely where it gets dark or what a location looks like or the quality of the sun when we previously shot. That was a big help when the second unit came on towards the end, so they could get up to speed.” 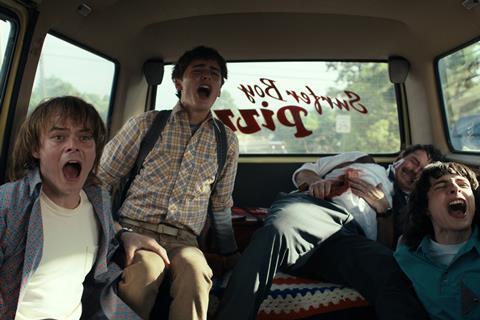 He stresses: “No one has got time to watch rushes on a show like this. It’s coming at you so fast; I didn’t even see dailies. You are always looking forward.”

That’s a ‘no’ to virtual production

A potential solution for efficiency might have been to shoot more on a virtual production volume, something the filmmakers did explore at the Netflix stage in LA prior to shooting. In order to do so, however, all the digital assets would have needed to be ready and signed off, which wasn’t possible in the timeframe.

The production did use LED backed stages for some elements, however, including scenes in moving vehicles and the water-based sensory deprivation chamber into which Eleven (Millie Bobby Brown) is forced.

“We couldn’t fit a camera in the sealed chamber of the set, yet we needed realistic reflection of monitors overhead,” Heymann explains. “So, we created the effect by hanging a LED panel above the set onto which we projected light from the monitors that would reflect on the water. That gave us the space we needed to deploy a Technocrane.”

Using practical effects like this rather than VFX is another important part of the show’s aesthetic and carried through to the creation of Vecna, the Dungeons & Dragons’ character terrorising all and sundry in S4. 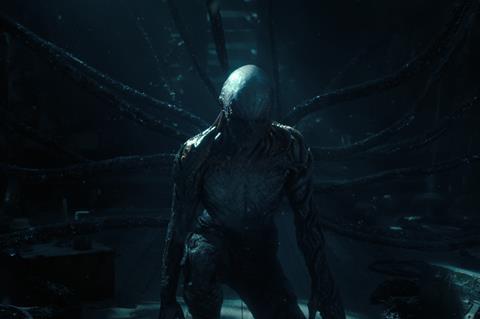 “Jamie Campbell Bower (the actor playing Vecna) was incredibly dedicated to having SFX makeup (by effects designer Barrie Gower) applied for up to eight hours every time, but it was so well worth it. Shooting in camera took us 90 per cent of the way there. We were able to light an actual monster in the flesh and make sure the shadows hit the right places and we caught the sheen of its skin.

“In S3, with the Mind Flayer, we were using tennis balls on stands to shoot a giant imaginary creature and you’ve no real idea how it looks. In this case, it was amazing. It was easier to block and the actors could play off of Jamie too. When Vecna’s hanging from his vines he really is hanging there, albeit that VFX augmented and animated the vines in post. The red light is real too so the scenes are always tethered to something physical.

“That said, when it comes to the twisting limbs and pretzel bodies, we shot a reference of what an arm would look like for post to then mangle it!”

Stranger Things 4 is available to stream on Netflix.

Go behind the scenes of the best TV and film productions with IBC365. From Avatar 2 and Top Gun: Maverick to Springwatch and the America’s Cup, browse the Behind The Scenes archive