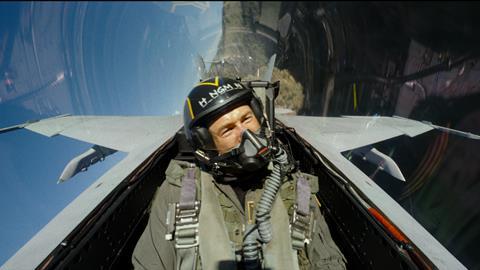 Top Gun: Maverick – behind the scenes

Having raced motorcycles, been strapped outside an Airbus 400 at lift-off, put a helicopter into a controlled spin and signed on to film aboard the ISS, there was no way Tom Cruise was going to be chromakeyed into a F/A 18 jet for his return as Top Gun: Maverick.

“The bar was set impossibly high every day of filming,” says editor Eddie Hamilton, who began on the project in summer 2018. “You can’t put average shots in Top Gun. You are constantly combing the dailies looking for something better.” 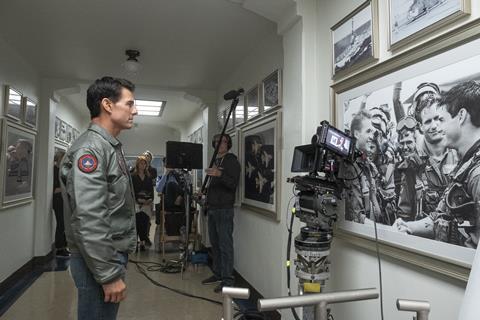 Top Gun: Maverick, Behind the scenes

For all its cheeseball machismo, the original Top Gun set a new fast and furious template for action movies on its way to $350m at the box office in 1986. The film’s aerial dogfights didn’t just have to be matched in the sequel but bettered and that meant shooting as much practically as possible.

The Cruise ‘brain trust’ assembled for the project included director Joseph Kosinski (Oblivion), co-writer Christopher McQuarrie (who has written and directed Cruise in one Jack Reacher and two Mission: Impossible films, with another two on the way), Jerry Bruckheimer who co-produced the 1986 smash hit and Hamilton himself. The British editor previously collaborated with the actor-producer on MI - Rogue Nation and again in MI: 7 as well as earning blockbuster spurs on Kick-Ass, X-Men: First Class and Kingsmen: The Secret Service. 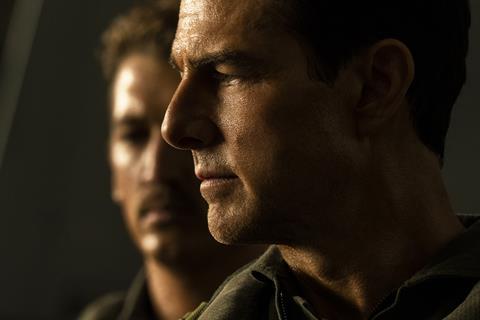 For Maverick’s pre-credits sequence they deliberately leaned into Top Gun’s over the top style down to using the same gradient filters, music (by Harold Faltermeyer) and title font of the original. The first sequence they filmed was a high-speed tracking shot of Cruise on a Kawasaki motorcycle, dressed in Maverick’s leather jacket and Aviator sunglasses, racing an F/A-18 down a runway, framed against a classic Tony Scott sunset.

Resisting pressure from Paramount to shoot the movie’s aerial sequences first, Cruise campaigned for the actors to go through five months of intensive Navy flight training.

“I can’t just stick an actor in an F/A-18,” Cruise explains in the film’s production notes. “Not only are they going to pass out, there are so many things happening in that airplane. You have cameras. You have lighting. You have performance. They’ve got to be pulling Gs. They’ve got to be low. They have to have that experience in that aircraft. You see it. You feel it. You can’t fake it.’”

So the actors trained in basic aerobatics and short-duration G forces then acclimated to the longer-duration G forces experienced when manoeuvres an L-39 jet trainer before gravitating to the F/A 18 Super Hornet.

They flew in some of the most challenging and picturesque landscape in America, including Rainbow Canyon, on the western edges of Death Valley National Park, and Washington’s Cascade Mountains.

While the ground-based story was covered with the usual 2-3 cameras the aerial work was astonishingly complex. Each twin seat F/A 18 had six Sony Venice cameras fitted inside the cockpit – four on the actor seated behind the pilot and two over the shoulder of the pilot. The pilots wore the same wardrobe as the actors they were flying (identifying each character with a different helmet, colours and insignia).

The four cameras on the actor were focussed slightly differently: One wide and one tight front on, and two with a more three quarter angle from either side.

DP Claudio Miranda used the Rialto extension of the Venice to fit inside the cramped space. This system separates the sensor block from the camera body tethered by a cable. The sensor can record a full 6K in large format suitable for IMAX presentation and way beyond the quality that action-cams like GoPro could achieve. 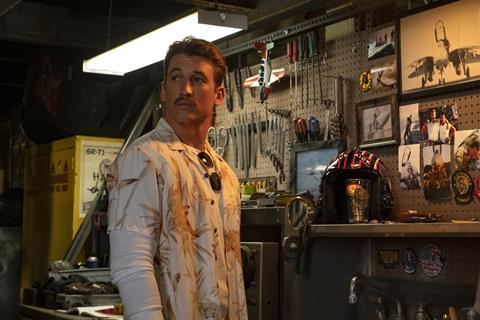 The actors were responsible for turning the cameras on mid-air, perhaps 20 minutes into the flight when they’d reached their filming location. With no intercom to the ground, they were also charged with directing themselves including saying their lines when the plane was at the correct altitude, positioned with the sun over their shoulder, that their visor wasn’t fogged up, their mics set correctly.

“Actors would rehearse lines on the ground with Joe but in the air they were responsible for each take, asking the pilots to fly the same route again if their line or action could be improved,” says Hamilton, who was working out of an edit trailer in the same hanger as the F-18s.

A typical filming day would begin at 7am on the naval base (one of six used during the shoot: China Lake, Fallon, Lemoore, North Island, Whidbey Island and Norfolk) for a two-hour briefing. By 09.30 the planes would be in the air, landing an hour later having recorded 20-40 minutes of footage.

In the air, with no intercom to the ground, the actors were fully responsible for each take

“One thing we discovered was that the locked-off cameras weren’t producing much visual energy. Tony Scott used rear projection in 1986 so could move his cameras around the cockpit, but our cameras were bolted rock solid (for obvious safety reasons). One way we could generate energy was by having the actors move their heads more when looking around the cockpit.

“Some were being supercool and taking their cues from the fighter pilots by doing as little as possible to conserve energy. After the first week of aerial filming Tom invited everyone into his room on the carrier and explained to the actors why they had to exaggerate their movements.”

They would make four flights a day often with a ground-to-air unit shooting simultaneously. One day, they rolled 27 cameras. That made for an astonishing amount of footage; over 813 hours, more than all three Lord of the Rings movies combined.

Another technique was to choose shots with a moving horizon. “Jet pilots are trained to fly level to the horizon but we asked them to break that rule so that there’s always a bit of movement behind the actor. In the film you’ll notice that we picked shots with good energy where possible. 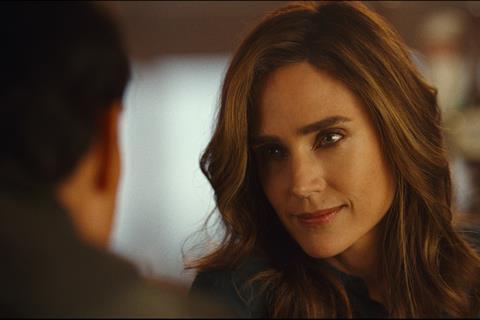 “The skill of the pilots is extraordinary when flying so close to mountains or the bottom of a canyon at 700mph. The margin for error is incredibly thin. You can see the adrenalin pumping through the actors. Their fear and excitement is real.”

Some jets were fitted with additional cameras outside the craft. Other jets would fly the same route to capture POVs and shots looking backwards and sideways. They would make four flights a day often with a ground-to-air unit shooting simultaneously. One day, they rolled 27 cameras.

That made for an astonishing amount of footage; over 813 hours, more than all three Lord of the Rings movies combined.

First, all camera footage per flight was synced with timecode. Then, Hamilton’s editorial team logged every significant detail from lines of dialogue to when an actor’s head moves – and in which direction. Then it was a case of chipping away at the mountain.

“I’d spend entire mornings looking for the perfect shot of a jet turning left - or flying inverted through a narrow canyon. Sometimes I’d add only a few seconds to my timeline each day. I felt the weight of expectation every day for the year it took to film and another year to finalise editorial.” 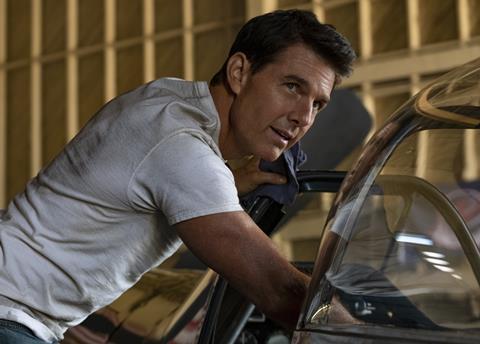 Editing was a case of chipping away at the mountain

Sequence assembly was complicated because he didn’t receive any exterior shots of the jets to show the geography of the aerial action until months later.

“Joe prepped meticulously with storyboards and we did previsualise some dogfights, this was a useful thought experiment, but it’s hard to film a real jet to match the previs closely.”

Hamilton would place X-Men action figures against his 65-inch monitor to get some sense of big screen scale.

“It’s a trick I learned from [editor] Walter Murch,” says Hamilton. “It helps you imagine you’re in a cinema. I wasn’t necessarily cutting slower for an IMAX presentation. Each shot has its own life and you cut when the energy expires. Every single angle had to look amazing.”

Eventually overwhelmed by the volume of footage, Hamilton requested help and got it in the form of Chris Lebenzon, who was Oscar nominated with Billy Weber for his work on the original film. On Maverick, he worked principally to shape the climactic dogfight.

Lebenzon told IBC365 that Top Gun too had been largely built in the edit. “The only script we had was ‘they engage the Russians and win the fight’.” he recalls. “We had to piece together a story of the battle that made sense in terms of the geography of the planes and where the actors were looking. Since Tony shot the actors wearing pilot masks we could record any line of dialogue over the top. Tom was frustrated one day and there’s a shot of him in the cockpit with his mask on and he’s shouting for his PA. Of course, you can’t hear that but I loved the intensity in his eyes so we kept that shot.”

Lebenzon also dismissed the idea that outtakes from Top Gun could be used to make a sequel saying that they had used every good shot of jets in the first movie.

Likewise, Hamilton testifies that every single great shot of a jet culled from hundreds of hours of footage is in the film.

“I can honestly say we didn’t compromise Maverick at all. Visually and sonically everything we want you to see and hear throughout the movie is up there. I’m thrilled that audiences finally will ride back into the Danger Zone.”