Lots of things can add tiny amounts of delay to a signal path, making getting everything in sync tricky. Now, Hitomi’s new MatchBox Latency feature can analyse delay without delay, and with millisecond accuracy.

Russell Johnson, Director of Hitomi Broadcast, said: “The need for low latency is much talked about, but rarely quantified. With MatchBox it can be. As the system is already deployed worldwide with major name broadcasters, widespread adoption of this new technology can be rapid.” 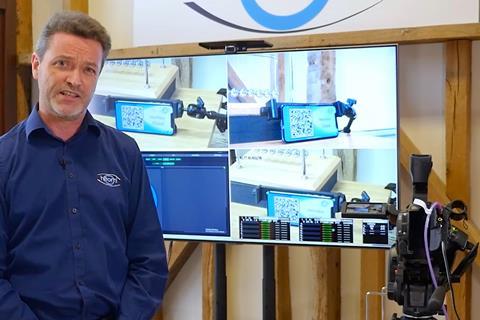 Johnson: “The need for low latency is much talked about, but rarely quantified. With MatchBox it can be”

Johnson claims that initial customers he has visited using Latency “have found it to be a game changer. Their workflow is now to check that the latency is what they were expecting first then follow it by measuring lip-sync. This is because if video latency is longer than expected then the lip-sync will be out. Audio arriving early is most disconcerting to viewers as in real life we rarely hear things before we see them.”

Determining offsets theoretically can take up a lot of engineering time; with MatchBox it takes just seconds. Hitomi’s system is “fast, easy to use and accurate, simplifying the task of measuring latency and delivering a lip-sync reading as well”.

Users display a timed test pattern (available on a free iPhone app, Hitomi Glass, or using a MatchBox Generator) as the source with a bespoke analyser receiving and decoding it at the destination, to get the timing measurement. Existing Generator users can upgrade their software for free to create the timed signal. This added functionality is particularly useful for multi-venue events across several locations, where multiple broadcasters must work together.