While solid-state based storage, like flash memory modules and solid-state drives (SSDs), play an important part in data intake or local storage for post-production, the huge amount of video and audio being created requires much greater storage capacity to match, preferably at the lowest cost-per-capacity possible. This typically requires spinning hard disk drives (HDDs), where innovation means the latest drives from Toshiba can hold up to 18TB.

Toshiba offers economical client HDDs, such as the P300 and X300 models for content storage and media archiving, or its N300 NAS HDDs for direct-attached storage subsystems and network attached storage resources. There is also the enterprise use MG Series for centralised large media storage. 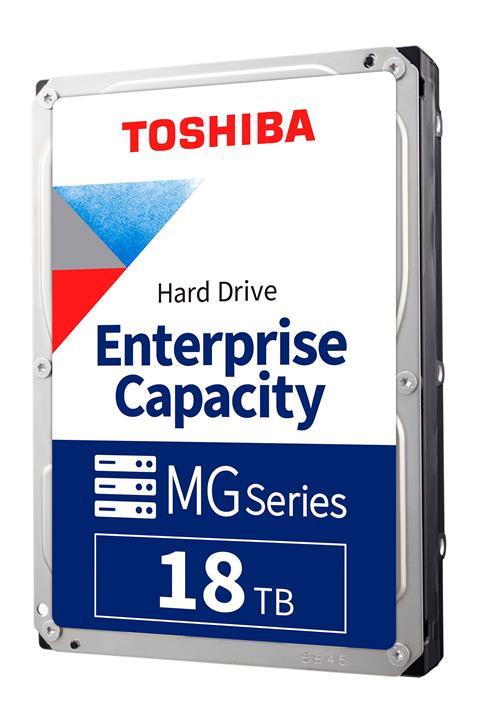 Toshiba’s latest MG Series HDDs can hold up to 18TB

To complement the X300, N300 and MG-Series air-filled models, which utilise up to seven spinning platters and have capacities reaching 10TB, its new 12TB and 14TB drive models have nine platters. This is possible using helium-filled designs that allow the use of thinner platters that can be more densely packed together to raise capacity levels. Other developments, such as a twin read head, have brought higher accuracy in reading and allowed the storage of greater capacities on the same magnetic surface, resulting in Toshiba’s 16TB drives.

Recently Toshiba introduced the world’s first commercial microwave assisted magnetic recording (MAMR) based HDD, where the magnetic write flux has been focused by using the flux control effect - which increases storage capacity up to 18TB.

Connect with Toshiba on IBC Digital

As these advances have been done without major cost increases, the cost-per-capacity is still dropping due to the availability of higher capacity for the same cost.

HDD speeds are also rising. Toshiba has optimised the higher sequential and random speeds in its latest elevated capacity HDDs. While single HDDs supported speeds of less than 200MBps just a few years ago, today’s top models, such as the Toshiba MG09ACA18TE 18TB HDD, run as high as 281MBps. Similarly, where the industry could only get random performance IO-operations-per-second (IOPS) rates of 250 in the past, today 400IOPS or more are offered.