IBC has announced the 2022 winners of its prestigious Social Impact and Innovation Awards, with winners from across the industry and around the world.

The IBC Social Impact Awards recognise projects that drive inclusivity and sustainability whilst the IBC Innovation Awards mark advances in creation of engaging and original content. 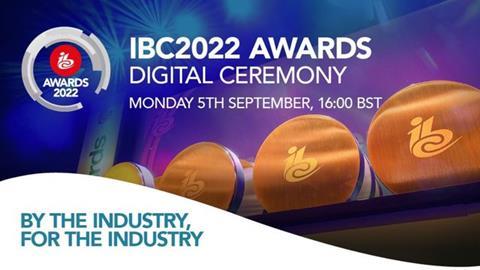 IBC recognises that the media industry is a central part of the global community, both as a communicator and a major player. To celebrate this, IBC has reintroduced its social impact awards this year, looking for projects which drive inclusivity and sustainability.

The IBC2022 Award for Social Impact was taken by Ethekwini Filmmakers Association for its activities to support a new generation of young talent, telling authentic and unadulterated South African stories in their own languages.

Such was the strength of nominations for the Diversity and Inclusion Award, the judging panel chose two projects as the winners. Break the Codes is a documentary from Iota Production and Director Safia Kessas, which tackles the gender imbalance in the science, technology, engineering and mathematics STEM industries by following the experiences of four women as they progress in “the guy sector”.

Taking the IBC2022 Award for Environment and Sustainability was Driving Environmental Awareness, the central goal of WaterBear. This is an interactive streaming platform using the power of storytelling, supported by major partners like Nikon, aiming to raise awareness and encourage involvement in green campaigns.

If WaterBear is about the conservation of the planet, then the winner of the IBC2022 Innovation Award for Content Distribution focuses on preserving content and artefacts for future generations. The UK’s Imperial War Museums is providing secure, geographically dispersed digital storage for more than a million items. Passing on Real Stories of War ensures that vital history remains alive, whether through outreach programmes or through support for movies like Peter Jackson’s They Shall Not Grow Old.

The other two Innovation Awards both reflect the growing importance of virtual content and augmented reality in creating engaging and original content.

Fox Alternative Entertainment found a radical new approach to television talent shows in Alter Ego, in which the performers became avatars: live and in real time, appearing on stage in front of the judges and an audience. The judging panel, of international editors and commentators, awarded it the IBC2022 Innovation Award for Content Creation.

The final award in the group is for Content Everywhere: bringing the same level of excitement and information to the audience, wherever they are. In a closely fought contest, the winner was the 5G Edge-XR project led by BT Sport, which opens up new ways of implementing augmented and mixed reality, whether it is showing kicking distances in a rugby stadium or being able to view a boxing contest – or a ballet dancer – from any angle.

The advanced research behind 5G Edge-XR was also recognised with the award for the Best Technical Paper in the IBC Conference. Authors Andy Gower of BT Sport, Rob Oldfield of Salsa Sound, Nick Fellingham of Condense and Adrian Godfrey of The Grid Factory will present their paper on Saturday morning at 10.00 in room E102.

The digital-first awards ceremony also showcased Infinite Journeys, a 3D motion graphics project initiated by design guru Clinton Jones, better known as Pwnisher to his million plus social media followers. In response to a lockdown challenge, 2,448 artists responded with scenes to his template, representing a collective total of 18.8 years of work. The IBC Innovation Award panel gave him their Judges’ Prize.

Sonya Chakarova of PlayBox Neo and Daniella Weigner of Cinergy, supported by Consultant Phillip Covell, galvanised the industry and brought together more than 400 contributors in Supporting Ukrainian Media. Their efforts include both practical efforts for broadcasters still active in Ukraine and finding jobs for those fleeing the conflict. IBC recognised their efforts with a Special Award.

The International Honour for Excellence

The IBC2022 International Honour for Excellence, IBC’s most important accolade, marked the 100th anniversary of the BBC, which – as radio station 2LO – first went on air in November 1922. In a happy coincidence, the BBC’s first home was Savoy Place in central London: home to the Institute of Electrical Engineers, now known as the IET and one of IBC’s owners.

Acknowledging the award, Tim Davie, BBC Director-General, said: “I am delighted that our centenary has been recognised this way, by IBC and by the industry. The BBC is celebrating not by looking back, but forward. Our focus is on securing our success as a leading player in the global digital media market, ensuring public service broadcasting thrives in the future.”

Michael Crimp, IBC CEO said: “The awards programme has long been a cornerstone of IBC. Sharing knowledge and experience is at the heart of IBC, and the winners this year reflect that spirit of co-operation. They bring imaginative, innovative thinking to build better for the future. Congratulations to everyone involved.”

The winners of the IBC2022 Awards were announced in an online ceremony on Monday 5th September and will collect their trophies at a live reception at IBC on the evening of Sunday 11th September. The trophies will be presented to the IBC2022 Award winners at a reception in room E102 on Sunday 11 September, starting at 18.00. All are welcome.