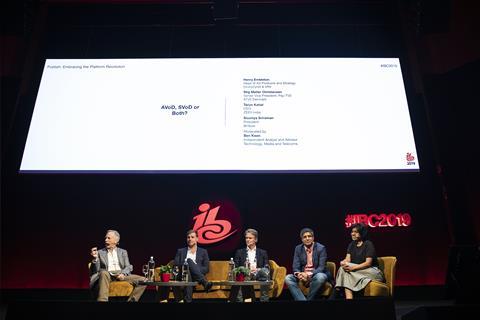 AVoD, SVoD or Both?: The panel discuss

The pace of the OTT market is set to increase over the next few years with companies such as Amazon TV, Disney and Apple TV best placed to win out.

So said a panel of executives from streaming services such as Brit Box, Crunchyroll and ZEE5 speaking at IBC2019.

According to Crunchyroll/VRV head of products and strategy Henry Embleton, companies such as Amazon TV and Disney will have a strong future in on demand media. “Amazon because of its whole end to end ecosystem of content and data. Plus it is likely to start spending big money on sports rights such as the Premier League to build subscribers. Disney is in a strong position too, simply because of the quality of its slate of content,” said Embleton.

Soumya Sriraman, president of BBC and ITV streaming joint venture channel BritBox, serving the US and Canada, said that Apple TV, which is set to launch in November at $4.99 a month, would be one to watch.

Tarun Katail CEO ZEE5 India added: “There is certainly going to be a lot of aggregation – especially in the Indian market, which has a large number of competing on demand services.”

Meanwhile OTT platforms are focussed on converting their AVoD viewers to SVoD subscribers.

Stig Møller Christensen, senior vice president, Pay TV at Danish Pay TV operator TV2 said that the Danish broadcaster’s portfolio, which offers a range of linear pay TV channels, has experimented with several models, including AVoD, SVoD and HVoD, a hybrid pay model where subscribers are offered a discounted subscription in return for accepting some advertising.

Chrisensen said that the platform has had a lot of success converting AVoD viewers into SVoD subscribers.

“Our pay services used to be 100% ads, but now it’s more like 55% SVoD, 45% AVoD, with a third of our SVoD audience opting for the HVoD model,” said Christensen.

“We think it’s a reflection of the fact that with the development of Netflix and Amazon, consumers are now are accustomed to SVoD – they expect to be offered an ad-free premium environment.”

Crunchyroll’s Embleton added: “The OTT market has changed a lot in very short space of time. When Netflix first came out people were like ‘$10 a month – wow!’ Add but now you have Amazon, with Disney and Apple TV about to launch. The problem for people with multiple subscriptions is that they have to come in and out of each platform to find what you are looking for.”

BritBox’s Soumya Sriraman said the service made a clear decision early on to say no to advertising. “We had a different kind of consumer. Our potential audience has been effectively built by PBS in the US. We offer our viewers stuff they recognise – shows that are in their comfort zone. And then offer them new stuff, such as Trooping the Colour or content from the Edinburgh Festival Fringe, which was – to our surprise – really popular.”