The deal hinged on a restructuring of Intelsat’s considerable $14 billion of debt, and Japanese media conglomerate SoftBank was prepared to invest $1.7 billion to help in that financial restructuring. SoftBank also owns 40% of OneWeb, so it had a double interest in the deal’s success.

But it was not to be.

Intelsat’s debt bond-holders were holding out for better terms and SoftBank – in effect – said ‘no’. Intelsat needed an 85% acceptance level of the new terms on offer, and by the midnight May 31st deadline acceptance levels were well short of this amount.

For a few days ahead of the deal’s collapse the market had latched onto the risks surrounding the deal and helped by SoftBank’s on-the-record statement that it had also been engaged in talks with “other satellite operators” in the event of the Intelsat/OneWeb deal failing.

SoftBank Chief Financial Officer Alok Sama said on Thursday: “While we are disappointed Intelsat was not able to achieve an acceptable agreement with its bondholders, we continue to be enthusiastic about OneWeb’s standalone prospects, and its potential to disrupt the satellite industry and communications business generally. SoftBank will continue to work with the OneWeb management team to seek alternative paths to accelerate its strategy.”

London’s Financial Times newspaper suggested the Intelsat/OneWeb merger may not be quite dead - yet. They quoted analysts at Citigroup saying that the termination of the financial restructuring could be a “negotiating ploy” in SoftBank’s move on Intelsat’s debt-holders.

Bloomberg News added that OneWeb is already in discussions with other satellite operators and named Telesat of Canada and SES of Luxembourg (SES share price rose 4.1% in Paris trading 1 June) as well as London-based Inmarsat as potential players in a possible second stage of this mega-deal. Inmarsat’s share price rocketed from £8 a share to £8.55 in just 30 minutes of trading on 1 June.

So, what precisely is the appeal of OneWeb, which to-date has not carried a single megabit of traffic?

OneWeb, formally registered in St Helier, Jersey on the Channel Islands but is headquartered in Arlington, Virginia, and was earlier known as WorldVu.

Its founder is Greg Wyler who explored collaboration with the likes of Google to build a ‘super-constellation’ of Low Earth Orbiting (LEO) satellites to totally cover the planet with broadband access. Wyler, and a handful of senior executives quit the Google scheme to launch their own plan. 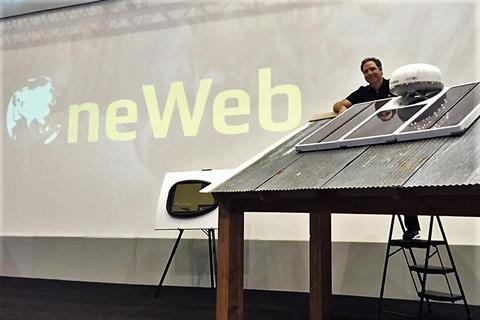 Since then OneWeb has moved rapidly forward. It has won investor support from SoftBank as well as Virgin Group, Airbus, Qualcomm, Bharti of India and even Coca-Cola, as well as Intelsat.

It is partnering with Airbus Space & Defence to build its satellites. The first pair of ‘pilot’ satellites will come this autumn from a production line in Toulouse, France, although the bulk of the initial 648 planned to be launched will be assembled at a brand-new $85 million factory in Florida, at a rate of about 15 per week. The first satellites are due to be launched early next year.

The eventual concept calls for a total of 2,900 satellites to be built and launched, including ground spares.

Intelsat has a signed and sealed investment stake in OneWeb and while the bigger deal died, it is still happy – indeed enthusiastic – to work with OneWeb.

Intelsat CEO Stephen Spengler said: “Even without a merger of our companies, the pre-existing commercial agreement among Intelsat, OneWeb and SoftBank will continue.

“Under this agreement, we plan to jointly develop integrated solutions utilising both of our fleets and to act as a sub-distributor to SoftBank for the attractive application segments of mobility, energy, government, and the connected car.”

Have no doubt, OneWeb has the potential to radically alter and significantly improve access to web-based services, including video, for underserved regions.

Most of the capacity on the first batch of 648 satellites has reportedly been pre-sold (and players such as Facebook are enthusiastic about satellite-based access). The satellites will ‘fly’ at just 1,200 kilometres above the Earth’s surface meaning that latency will not be a major problem for internet or voice-based activity.

But OneWeb is not alone in the race to space. SES of Luxembourg already has a dozen similar satellites in use, and is planning more.

O3b, an SES subsidiary, aims to reach the “other 3 billion” on the planet who have little or no access to broadband. One other fact about O3b: It was founded by Greg Wyler, the name behind OneWeb.

Besides OneWeb and O3b there are other mighty names involved in planning new super-constellations, and they’re all widely acknowledged as geniuses.

They include the billionaire behind rocket company SpaceX and the Tesla electric car, Elon Musk. Musk wants to build his own massive fleet of satellites.

Then there’s Mark Zuckerberg who wants to supply his Facebook service to the planet via satellites. Google must also to be included, and has formally registered patents published in January this year for a global-scale system of more than 1,000 satellites.

Not to be outdone is aerospace giant Boeing which is planning a super-constellation of between 1,396 to 2,956 satellites working in V-band.

There are other schemes afoot, from smaller operators but each chasing the same ‘connectivity’ dream and where gallons of satellite capacity will cope with the world’s demands.

Will they all succeed? Probably not. But the likes of SoftBank seem happy to invest $1 billion in OneWeb to kick the whole process off. And while Google, Boeing, Facebook, SES and Elon Musk are spending billions to gain access to space few could deny the prospects for dramatic change are more likely than ever.