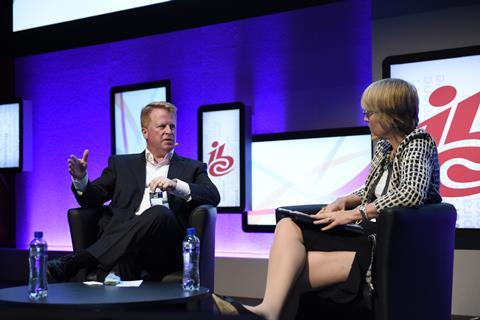 Brian Sullivan, President/COO, Digital Consumer Group, Fox Networks told IBC delegates that disruption in TV is perfectly natural. “Once, consumers had all the power. They watched three TV channels without a fee and saw great entertainment.

“Cable changed that paradigm, then came VHS tapes and DVD forcing another change. Then came TiVo and PVRs, which gave consumers greater control but at a cost of almost $100 a month.

“Then came the streamers, and consumers saw that they could get all this seemingly wonderful content at less than $10 a month. Today, in the US there are more than 200 of these content aggregators, but what’s happened to the ‘missing’ $90?

“I can tell you it isn’t working for business. We, with Fox Now, have started from scratch and put the power back into the consumer’s hands. We have moved from about 17 different networks to just five.

“One of the problems is [TV] rights and screening windows. There is pain for some players, and many channels will not make it because demands have changed. There really isn’t a need for sub-genres of this or that channel, because we are showing everything in a very easy-to-access UI.”

“Like everyone, we are learning and we are investors in the VR concept”

Sullivan is also a board director at Hulu, and moderator Kate Bulkley asked what his feelings were about Netflix and Amazon Video. “Netflix is a spectacular service at a spectacular price. We, the studios, created it with our content. But, like the other studios, we will review the shows they screen on a case by case basis.

“As for Amazon, they are obviously important and I have little doubt that one of these days they’ll be running a global government. [Jeff] Bezos is an amazing character.”

He touched on the threats from social media-based platforms, and admitted everyone was still learning. “If we knew how we could monetise in the social world, we would. Personally, I don’t think long-form video works on social media where the average time spent watching any video is about three seconds.”

Sullivan also addressed VR and the other emerging technologies, and said he had always been a fan of 3D and look what happened to that! “But, like everyone, we are learning and we are investors in the concept.”