XR, Esports, smart buildings, and the evolution of screens are some of the core topics being discussed at this week’s ISE conference. Adrian Pennington investigates the AV Tech show. 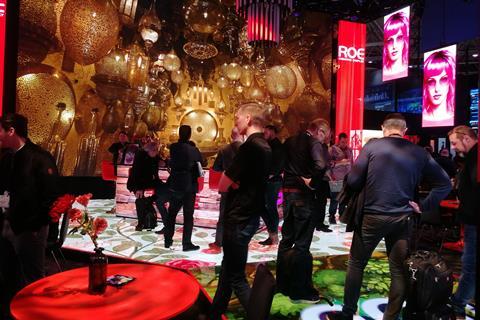 With more than 80,000 attendees, and 1,300 exhibitors (minus LG and a few others from Asian Pacific which elected to stay home due to virus fears), there’s a lot to take in at the world’s largest exhibition for AV and systems integration professionals.

Pro AV, in a nutshell, is any video or audio application that isn’t media and entertainment. Most of the tech is designed to communicate information.

It’s a diverse market ranging from battle-ready military simulators to the digital advertising screens on any high street as reflected in the $85 billion that Avixa, the trade association and co-organiser of ISE, thinks Europe’s pro-AV market will be worth by 2024.

IDC’s Worldwide Augmented and Virtual Reality Spending Guide forecasts that global spend on AR/VR will top $18.8 billion this year – up 78.5% since 2019, with nearly two-thirds of the spend by businesses.

Another recent Research and Markets report pins global XR industry at $209 billion and predicts it to grow 65% over the next five years.

“While XR is undeniably the future of business, many businesses aren’t quite sure where to start,” suggests Kathryn Bloxham, head of innovation at XR Intelligence.

Hilary McVicker of immersive projection specialist Elumenati said the potential of “spatial XR” was to “bridge the physical and digital worlds” to provide “a social, collaborative way to experience immersive content.”

An obvious market for XR is museums, theme parks and other entertainment attractions. A ‘VR at ISE’ feature exhibited an aquatic theme park ride. Designed by Lightspeed Design this allows the rider to ‘touch’ virtual objects, including a jellyfish and dolphin, using mid-air gestures. The VR content is projected onto a curved Vioso Panadome screen by Digital Projection hardware so the rider doesn’t need to wear a headset. Other spectators, also on motion seats, could watch with head-mounted devices.

XR is being increasingly used in corporate training, design, aviation, medicine and education.

Volkswagen, for example, is using AR for indoor navigation at some of its factories. AR also helps companies to train new employees.

“Virtual prototyping and simulation will be a necessity for a huge number of companies,” said Frank Reynolds, marketing manager at Antycip Simulation. “Virtual content can open doors for countless procedural training tools addressing a multitude of professional uses.”

The AR cloud – conceptualised as a machine-readable 1:1 scale model of the real world is expected to transform the way that businesses operate and communicate with customers according to ABI Research. It thinks AR Cloud will have a market cap of over $100 billion by 2024.

Haptics can’t be discounted either: For example, a helmet designed by researchers at Carnegie Mellon University gives firefighters the ability to ‘sense’ directions in pitch black, smoke-filled environments. The haptic helmet sends a buzz to the front, back or the sides of the head, precise signals which indicate whether the user should move forward, stop and turn left or right.

Esports get an education
Colleges in North America have been offering scholarships in esports for years and now UK colleges and universities are following suit. That’s partly because of the growing market in esports-related jobs and partly because higher ed establishments believe an esports course can more than pay its own way in graduate interest. There’s evidence too that gaming helps STEM studies, particularly in attracting women to areas where they have been traditionally underrepresented. 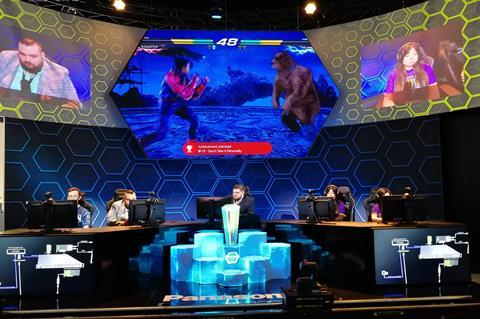 Staffordshire University introduced the UK’s first esports degree in 2018. The University of York has a partnership with Esports group ESL. Other institutions following suit include Chichester, Roehampton, Sheffield Hallam and Teesside.

These degrees focus on the business and event management aspects of esports, building skills in budgeting, marketing, and casting – not to mention the production skills of a live broadcast. Staffordshire Uni, for example, has built a dedicated esports lab and ‘pro-gamer training facility’.

“There is a lot of crossover between pro video and AV in esports,” says Kieron Seth, marketing director at kit distributor Holdan. “For us, it’s about providing a broadcast-level live event experience designed both for spectators in the arena and for viewers over the internet.”

The facility’s IT network is another critical component to building an esports program, interconnecting powerful gaming stations, minimising latency, and ensuring a smooth spectator experience.

The installed base of esports devices in North American and West European universities is forecast to reach 64,000 by 2021, according to Futuresource. A survey by Extreme Networks found that more than 70% of schools across K-12 and higher education in North America, Asia Pacific and Europe are considering an esports curriculum.

Smart buildings improve wellbeing
The smart buildings market is predicted to grow to $92.5bn globally by 2025, according to Rethink Technology Research, up from around $4.2bn in 2019.

“The design of buildings with renewable energy sources and with smart energy systems is an increasingly important trend,” said architect Aryanour Djalali, CEO of architectural practice DNA Barcelona, who gave a keynote at ISE’s Smart Building Conference. “Automation can be fully integrated into buildings so that all systems feed into the same cloud-based network.”

Erik Ubles, CTO at EDGE said, the four key elements of smart buildings are wellbeing, design, sustainability and technology. He argued that 85% of workers aren’t engaged in the workplace because of the physical environment.

“While heat, lighting and air quality all play a part in producing happier (fitter?) and more productive occupants we want to design spaces that connect people to the building,” he said.

If you want to use smart building technologies to save costs or increase margins, the main use case you should be targeting is human productivity, advised Rethink.

On the ISE show floor were companies showing how an open-plan office could be integrated with ‘smart’ technology to enhance and improve the work experience. Products in this area include human-centric lighting systems which use tuneable LEDs to offset typical cold corporate illumination, immersive audio, voice and gesture control, and products using 5G and Wi-Fi 6. For example, using 5G, architects could quickly beam a 3D rendering of a building to a conference meeting over 5G for interactive AR/VR design collaboration.

Screens: thinking beyond the frame
Digital signage is expected, by Avixa, to become the largest pro-AV solution area by 2024 eclipsing conferencing and collaboration.

Like ‘TV everywhere’ digital outdoor signage is all about context: who is watching and when, where and why they’re watching. As a result, content management software is evolving to digital experience platforms (given its own acronym DXP) to give greater control over tailoring content by time of day and device, or even individual passer-by. 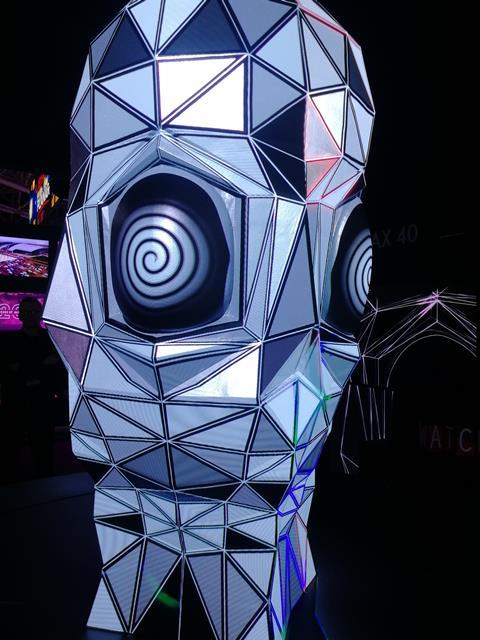 Another clue to how this will evolve was in a towering holographic display at the entrance to one of ISE’s halls made possible with an ‘invisible’ projection surface from Novaline and CarbonBlack Technologies, playback servers from disguise, Panasonic projectors and visuals created by Belgium’s NTTRB.

The next question is how do you make content stand out in a world of screens? Digital screens used to be flat and square but new flexible LEDs are freeing designers to get creative with format and to showcase more artistic content.

“With flexible and freeform LED, but also with projection mapping, the creative possibilities are virtually limitless,” says Michel Buchner from creative technology provider, Nexxt Technology. “The only problem is that the majority of designers and architects are not aware of this yet. Once they think beyond the frame and more about animated wallpaper, patterns, and textures blended as elements in their designs we expect a large rise in the use of aesthetic media with projection mapping and flexible LED.”

Combined with improvements to contrast ratio and more precisely controlled backlighting LED’s main advantage us its large footprint with no discernible gaps (bezel). Video walls composed of panels with virtually non-existent bezels (down to 0.5mm) spread across the show floor.

“The complexities of installation are becoming less of an issue too, as the rise of interchangeable tiles and out-of-the-box solutions pave the way for simplicity,” says Claire Kerrison, analyst at Futuresource.

LED ‘sheets’ exhibited at ISE from Spanish company Flying Screens can be combined to create custom-size screens for installed in unconventional locations such as on curved surfaces. The company claims the technology allows design and features which are currently impossible to reach with traditional LED panels.

The Abu Dhabi tourist board recently won a Guinness World Record for the size of an AR-enhanced digital billboard on display at Piccadilly circus. The 548 sqm display captured images of people near the statue of Eros and digitally placed them, using 3D AR overlays, among some of Abu Dhabi’s tourism landmarks.

Off to Barcelona
The latest research from Avixa shows pro AV revenues growing at 5.7% or twice the expected global GDP over the next five years. As a result, next February, ISE relocates to the far larger venue of the Gran Via in the Fira de Barcelona. Not bad for a show that was attended by 3500 people on debut in Geneva only 16 years ago.