How do you relocate a post and production department so that staff can leave the old office on a Friday and move into a new one on the following Monday? John Maxwell Hobbs reveals how ITV managed to do just that when it relocated key departments out of its South Bank HQ. 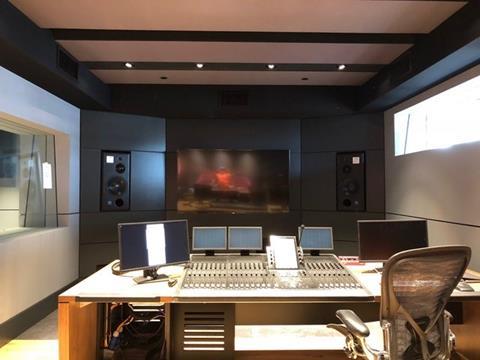 At the start of 2017, ITV announced the closure of its South Bank headquarters and studio complex.

The site is now undergoing a major redevelopment, and will reopen in five years as the new, consolidated headquarters for the broadcaster’s more than 2,000 staff.

The building’s closure has not only affected ITV’s studio programmes, which have relocated to Television Centre in White City, but also ITV Creative (its internal creative agency) and the broadcaster’s post production operation as well.

Both of those departments have now found a new home in ITV’s Gray’s Inn Road location, alongside ITV News and ITV Sport.

Director of ITV Creative & ITV Experiences Matt Scarff saw relocation as an opportunity to improve the overall working environment for the organisation. “It was a facility built for a different age of television, with rooms for big tape players,” he says.

“We had a blank canvas. It was a great opportunity to put all our facilities into the same place – voiceover recording, editing, grading, mixing and channel continuity” - Ryan Norman, ITV

The move had several logistical advantages for ITV Creative, which is responsible for creating and producing all ITV on and off air promotion, brand and design social media and continuity announcers.

“For the first time post production, ITV Creative, and Marketing were all on the same floor,” says Scarff. “In the old building lots of time was spent in the lift moving between departments that now have a big creative hub.”

The new location had other advantages too. “We had a blank canvas,” says Head of Post Production and Operations at ITV Creative, Ryan Norman. “It was a great opportunity to put all our facilities into the same place – voiceover recording, editing, grading, mixing and channel continuity.

”The previous setup with continuity was even further away from post in the old space. It saves time, and continuity now feels part of the main team. We’ve got more time to spend on being creative instead of walking from place to place.”

“In the old building lots of time was spent in the lift moving between departments that now have a big creative hub” Matt Scarff, ITV

Room for improvement
The aims of the project extended beyond a simple lift and shift of the existing operation. “We don’t take a lot of work out of house,” says Norman, “but our objective was to make it feel like it was a Soho facility in an ITV building. We wanted to make sure the creative and marketing teams, as a well as the talent, had a nice experience – at least as nice as it was in Soho.”

Their aim was for it to be an improvement on the existing purpose-built facility they moved from. “Things had to be better, and we achieved that,” says Norman. “We wanted the space to feel like you were walking into a different zone of the building – it’s darker and quieter and more focused.”

With less than eighteen months to deliver the project, they had to work quickly. “We had a bit of a rehearsal with this move as eighteen months previously we had to relocate to another area of the Southbank, at the same time as refreshing our post production technology,” says Scarff. “And that gave us a head start in a way, because we already had a full audit of the facility.

”The same tech team handled both moves, so the learnings were already there. It was well planned, and we were maybe a little bit lucky as we had to move our new campaign management system ITV Phoenix for the first time. This is our very own piece of software that we created to manage the thousands of on and off air asset we create, but I am pleased to say everything worked!”

The post production facility is in the former canteen space in the Gray’s Inn building. The team had a clear floor to move into, so everything was able to be designed from scratch. “We were even able to use sand in the floor to achieve ten times the acoustic isolation over the old building,” says Scarff.

The work was done by a mix of contractors and internal resources. “We used the same designers who build Soho facilities,” says Norman. “Hyperactive Broadcast oversaw the Avid server move from the old building. HHB Scrub was contracted for the sound side of things. The acoustic design was Level Acoustic Design, Dega Broadcast Systems for wiring and AKA for the edit suite furniture. Other than that, it was all an in house effort. We had a great deal of support for the move from ITV Technology.” 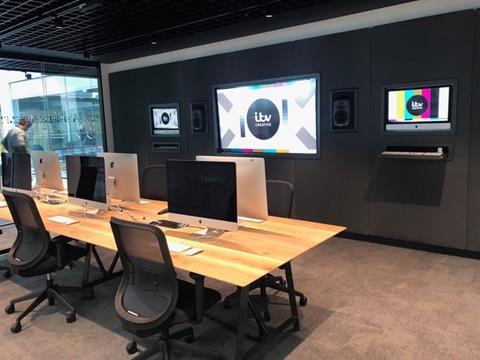 ITV’s HQ: ”A mix of existing and new systems”

New and old systems
The technology is a mix of existing and new systems. They use Avid Media Composer with ISIS, which is largely unchanged from South Bank facility. The R2 audio suites have brand new Avid F6 desks, are 5.1 capable, and will be certified for Dolby Atmos over the next few months. The grading suites are built around Davinci Resolve and are fully 4K capable with TV Logic 4K monitors.

“This is a massive part underpinning all of this – driving the workflows,” says Scarff. “At its core, it’s a MAM, and automates the versioning for programmes, endboards etc, and is integrated with the scheduler. This move has been part of the last part of the Phoenix project coming to fruition.” The relocation has also allowed them to reduce the MCR from 10 racks down to one through the use of Black Magic Smartscopes and Ultrastudio.

As to taking advantage of the relocation to move to an IP-based infrastructure, according to Norman, ITV decided to stick with an SDI in the new facility. “A change to IP will probably be part of a wider building project in the future,” he says. “IP is more apt for the next move. Once the old HQ is decommissioned at the end of this year, it could take five years for it to be rebuilt. Also, we don’t deal with live playout – we deliver via the cloud, so an IP infrastructure is not as key in this circumstance.”

The end result
Norman says that the new facility has also had a positive impact on the wider group of ITV colleagues located at Gray’s Inn Road. “Our new creative agency space is a pleasure to work in. We created breakout areas and a wider reception area in a great Norman Foster building,” he says. “People from other areas of the company like to use it. We’ve been able to make it a great space.”

“By design, we’ve brought the post facilities and what was hidden in the old building into full view. It’s the inverse of how it was before. We’ve had positive responses from the creatives that use the facility along with the production teams,” he continues.

“Everyone loved the old ITV HQ – it had had great views across the Thames – but the building was built for 1970s television production with few windows, endless corridors and thick concrete walls. Things have moved on. We now have a great space to work in. And a number of other broadcasters have come in to look at the space and how it’s been designed.”

Beyond technology, managing change was an important part of the project. It was part of a company-wide “London Moves” project. “Everyone in the tower was moving in a similar time frame,” says Norman. “Because we’ve given our team a premium creative space, any slight niggles about moving were completely wiped out.

”We wanted to make sure that everyone closed their laptops on a Friday in the old building, and walked into the new facility the following week with everything working and fully tested. It involved a lot of planning and change management to ensure that happened.

“The only thing they needed to do on Monday was to find out where their desks were, and even that was planned! It just worked. Knowing where edit suites should be, where marketing sits, and things like that is important. It’s also fully accessible – any edit suit, any audio suite can be used by anyone. And in a building where other companies work, the space is fully secure. Systems need to work when you walk into them. They should be ready and operational.”