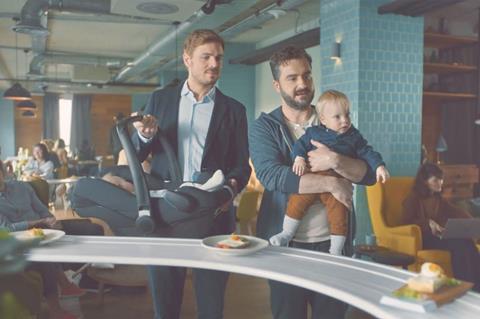 Philadelphia: The ad in which two dads with babies has been banned

Philadelphia and Volkswagen’s latest adverts have been pulled from TV after contravening new UK regulation on gender stereotyping.

The Advertising Standards Authority (ASA) banned ads for Philadelphia cream cheese and Volkswagen, following complaints from the public that they perpetuated harmful stereotypes.

Two television ads, Mondelez Philadelphia featuring two dads clumsily and comically looking after their babies, and Volkswagen depicting a woman sitting next to a pram, have become the first to be banned under new rules designed to reduce gender stereotyping.

The new rules, introduced earlier this year, ban the depiction of men and women engaged in gender-stereotypical activities to help stop “limiting how people see themselves and how others see them and the life decisions they take,” the ASA said, “harmful gender stereotype” which are likely to cause “widespread offence,”

The ASA regulates gender stereotyping in advertising and reported that some 128 people complained about the Mondelez advert for its Philadelphia cheese which featured two dads leaving a baby on a restaurant buffet conveyor belt as they were distracted by the food.

Complainants said the advertisement perpetuated a harmful stereotype by suggesting that men were incapable of caring for children and were so incompetent they would place youngsters at risk.

Meanwhile, three people complained about an ad for the Volkswagen eGolf car. It showed a sleeping woman and a man in a tent on a sheer cliff face, two male astronauts floating in a spaceship and a male para-athlete doing the long jump, before cutting to the final scene showing a woman sitting on a bench next to a pram.

Complainants said that the ad perpetuated harmful gender stereotypes by showing men engaged in adventurous activities in contrast to a woman in a care-giving role.

She said: “Ads that specifically contrast male and female stereotypes need to be handled with care.

“It’s about thinking about what the cumulative effect of those gender stereotypes might be.”

Mondelez UK argued that the ad showed a positive image of men with a responsible and active role in childcare in modern society. It said it chose to feature a pair of fathers to avoid a stereotype of new mothers being responsible for children.

The ASA said the ad “relied on the stereotype that men were unable to care for children as well as women, and implied that the fathers had failed to look after the children properly because of their gender”.

Volkswagen UK argued that its ad made no suggestion that childcare was solely associated with women, and the fact that the woman in its advertisement was calm and reading could be seen as going against the stereotypical depiction of harassed or anxious parents in advertising.

The ASA said the ad presented gender stereotypes “in a way that was likely to cause harm and therefore breached the code.”

On the new regulation, ASA chief executive Guy Parker said: “We’re increasingly taking proactive action so we can have the biggest impact in sectors and on issues where there is consumer detriment, or the potential for real public harm.”

In April 2016, the ASA launched a project into gender stereotyping in advertisements to test whether the UK Advertising Codes and the ASA’s enforcement of them take proper account of the relevant evidence base, including the views of the general public.

Gender stereotypes have the potential to cause harm by inviting assumptions about adults and children that might negatively restrict how they see themselves and how others see them.