‘Best OB truck in Europe’ among IBC’s outside exhibits

Anyone whose experience of OB trucks has been too little space, too many people, will be attracted to the biggest truck in IBC’s outside exhibits area, OBX, which has been built by Chromaline for Italy’s Videe.

Paola Montanari, CEO and co-founder, Videe, said: “We’d like to define it as the best in Europe at the moment.” 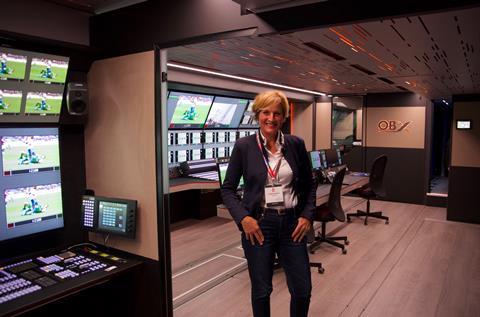 Montanari in the spacious OBX gallery

It has a unique Sony-based workflow, offering a cinematic look, and “a particularly excellent working experience,” said Montanari. “It can be configured as one very large gallery – up to 75sqm – with lots of room to move, or two separate, but connecting, production spaces. The secondary gallery has its own access, so can serve different customers.

“We paid much attention to the working experience so people can work in a relaxing space,” she added.

The air conditioning changes the air every 30 minutes, using special carbon filters and ion treatment to make it as comfortable as possible, even if there are 36 people working in it. Users can also change the colour temperature of the lighting in each area – important as the truck is designed for wide dynamic range.

It can be equipped with up to 30 cameras, and comes with two high-speed (8x 4K or 16x HD) Sony HDC-4800 large sensor cameras, which can be fitted with cinema-style lenses, ideal if particular sports or entertainment productions want a cinematic look. It also has 22 other Sony UHD cameras, and Canon lenses.

Unusually in the OB market, OBX does not have EVS replay. Instead, it is the first OB using Sony’s PWS-4500 replay server. As the 4800 cameras have servers in their BPU, and the 4500 works with them, the combined set up can have 64 replay channels. This integration with the high-frame rate cameras was the main reason Videe made the choice, although it helped that Sony was also cost competitive, she added

OBX is SDI-based, but is IP ready, so can easily make the transition when the market wants it. “We think that OBX is the right thing for now, the best we can offer to the market,” said Montanari.