German broadcast production company HD Broadcast is set to unleash its latest UHD 2 OB truck on the start of the German Football Association (DFB) cup matches for the 2020/2021 season, which are expected to start in mid-September. 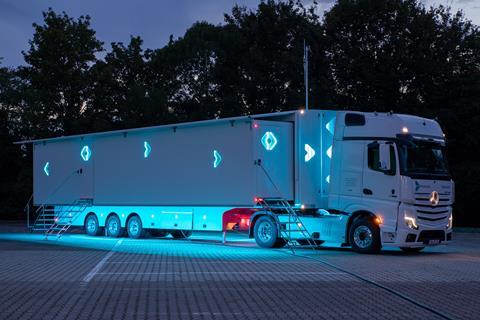 HD Broadcast: Latest UHD 2 is designed to be as pleasant and comfortable as possible

The stylish OB, which is one of Germany’s largest, can cope with up to 30 cameras, and was planned and built with Broadcast Solutions. It has an interior space of around 60sqm, offering up to 28 staff members a spacious and relaxed working environment, with some quirky design touches. Even fully occupied there is enough space to move inside the vehicle without crowding.

The 16.5m triple-expanding trailer uses a multi-format production system based on 4K/3G-SDI Quad Link and HD/HDR formats, centred around a Sony XVS 9000 UHD switcher with 160 inputs and 80 outputs, with three ICP-X7000 series control panels (up to 4M/E). HD Broadcast’s new flagship is designed as a trailer with three extensions covering the complete trailer length, thus providing two full control rooms, many engineering and slomo workstations and VIP workplaces. A third control room is available with the support van – another 18m trailer.

The large space and volume of equipment are reflected in the technical figures. Broadcast Solutions’ technicians installed around 70km of cable, more than 400 RU of rack space and 23 cable trays in the trailer. UHD 2 is also equipped with a UPS unit, which ensures 15 minutes of autonomous operation of the complete OB in case of a power failure.

“The initial planning provided for a rather tight schedule of 10 months for the construction of the UHD 2,” said Constantin Novotny, CTO and CEO of HD Broadcast. However, having worked with Broadcast Solutions before, he was confident it would be delivered on time, and is happy that it now has “a truly unique production vehicle that will attract a lot of attention in Europe.”

The overarching goal in the design and interior planning was to make working in UHD 2 as pleasant and comfortable as possible, while also providing shorter set-up times. Simultaneously with the commissioning of the new UHD 2, HD Broadcast chose a new corporate design, which is repeatedly taken up in various elements of the OB van, and helps shape the ambience of the workplace.

Design touches include electrically moveable tables and slomo spots, electrical windows, both inside and outside to change brightness, and electrically moveable doors, all providing additional comfort. The air conditioning settings, and lighting mood and type, can be adjusted in every room (within eight ‘climate circles’) to meet user’s preferences.