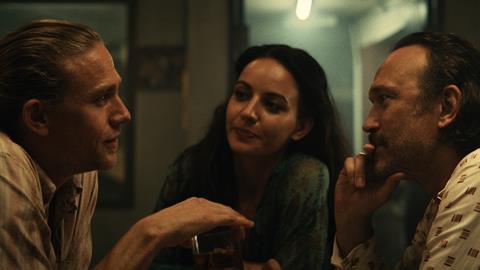 1980s’ Bombay is the setting for Apple TV+’s sweeping romantic adventure, recreated in Bangkok and shot by Stefan Duscio ACS

Based on the semi-biographical novel written by convicted Australian bank robber, Gregory David Roberts, about his adventures in the prisons, slums and seedy districts of a Casablanca-style Mumbai, any screen adaptation of Shantaram was destined to be an exotic affair. 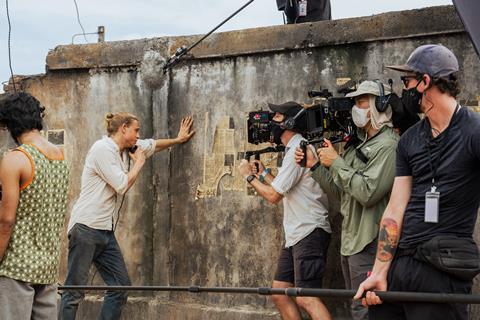 Published in 2003, the book is “legendary” in Australia (from where Roberts escaped jail) and its author an “anti-hero” to this day, according to cinematographer Stefan Duscio ACS, one of two Australian DPs on the project.

“I was already familiar with the tale and thrilled to receive the call to shoot this,” Duscio told IBC365. “I immediately had an idea of the scope of that story and its possibilities.”

Apple TV+ commissioned 12 hours from Paramount Television Studios and Anonymous Content’s AC Studios for a reported $100m and is co-created and executive produced by Steve Lightfoot, the British writer and producer behind NBC’s Hannibal, and Marvel’s The Punisher for Netflix. Lightfoot’s script changes Roberts’ name to Dale (then Lin) with Charlie Hunnam cast in the lead. Roberts himself was consulted by Lightfoot and Hunnam before shooting.

Behind the Scenes: Shantaram – Environmental references

“Steve pitched it to me as an epic cinematic adventure,” Duscio said. “One of his core ideas was to not be afraid to lean into the romance. It’s bit of a Casablanca where an ensemble of characters meet and scheme and fall in love with each other. It’s also a tale of redemption where Lin is trying to rediscover himself in a place that is foreign to him.”

The 1942 classic starring Humphrey Bogart was indeed a reference for the project that the creatives rewatched in preproduction. One of the main sets was for Reynaldo’s Café, a sort of Rick’s American where a motely crew of mafia, prostitutes, drug dealers and femme fatales of all nationalities gather. 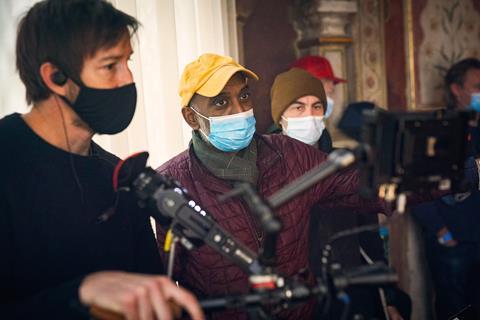 Other movie references included two factual book adaptations: Into The Wild (2007), the Sean Penn directed story of a man who hiked into the Alaskan wilderness; and On The Road (2012) the adventure drama directed by Walter Salle from Jack Kerouac’s famous account.

“These films touched upon ideas of wanderlust and discovery of yourself through travel,” said Duscio. “Also, the photography of On The Road is kind of invisible and that suited my approach here which was to sit back and be motivated by the environment and the actors and not to force my style on top – though we do get a bit more Scorsese when we first introduce our rogue’s gallery in Reynaldo’s.”

“The temptation was to film in a naturalistic handheld manner for a more humanistic drama but we chose to veer toward more scope and scale and to compose shots in a more traditional way.”

Indeed, there is so much colour and background action that moving the camera or editing frenetically would seem superfluous and distracting. The opening episode in particular establishes Mumbai (named Bombay in the 1980s setting of the story) as a teaming sea of markets, traffic and vibrant daily life with all the noise, heat and atmosphere you’d expect of this sprawling Indian metropolis.

Behind the Scenes: Shantaram – Recreating Bombay in Bangkok

Yet they never set foot there. By the time principal photography was scheduled to move from Australia to India in early 2020, the Delta variant was raging across the country. Instead, they recreated entire neighbourhoods of Bombay in Bangkok including Colaba, one of Mumbai’s oldest and hippest districts.

”We all wanted to go to India but it was impossible. Fortunately, Bangkok has a large Indian population which we could call on as extras and the city has an incredible art department. We were able to lock off and control large areas of Bangkok and to create the slums and downtown areas of eighties Bombay from scratch.”

This was a considerable undertaking and involved production designer Chris Kennedy who had previously designed the India-set film Lion, and the lighting and electrics team.

“The area of Bangkok where we recreated Colaba’s maze of backstreets had no power, no fixtures at all when we arrived. Everything you feel in those scenes has been put in by the art and electrics team. It did mean we were able to put in a whole bunch of lights from greenish fluorescents and tungsten to incandescents, moonlight, sodium vapour, a cinema with red neon in the background, mixed colours everywhere. It was really fun to play with. Lighting and art depts worked really hard to have the lighting feel correct to the period without it looking too full of modern LEDs.”

Behind the Scenes: Shantaram – Stunning texture and colour

For the look itself, the filmmakers gave the India portions of the story a greater warmth in contrast to cooler, more neutral flashback scenes in Melbourne. “The key thing was not to overdo that warmth,” said Duscio. “There’s a trend in western productions set in Mexico, in Thailand or India to over grade and use a ‘Tabacco’ filter way too much. With Chris and costume designer Margot Wilson we agreed not to overdo the period nature of this story.” 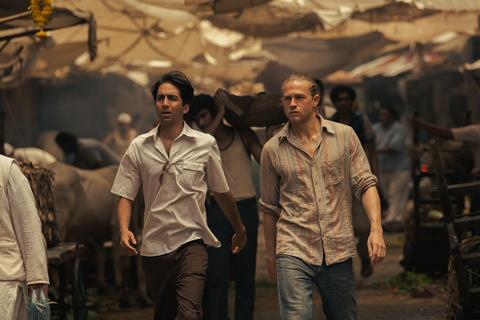 Shantaram: Shubham Saraf as Prabhu, and Charlie Hunnam as Lin

Wilson dressed the cast and extras in “a creamy palette” so that “nothing felt out of place.” Said Duscio, “I could just throw a camera on the street and the palette just felt so beautiful with so much texture to her wardrobe that I barely needed to edit anything.”

Working with colorist Tom Poole (Drive) the DP designed a LUT “that feels like a celluloid print”. He said, “I’ve worked with Tom on The Invisible Man (2020) and a bunch of commercials and knew he would eat this project up. He has a way of grabbing the image on screen and then turning it up it, dripping with texture.”

Behind the Scenes: Shantaram – Shooting decisions

The production shot on ARRI Alexa Mini LF paired with Panavision Ultra Panatar anamorphics. Duscio had lensed The Invisible Man on the same sensor and felt it ideal for the widescreen scope he was seeking. 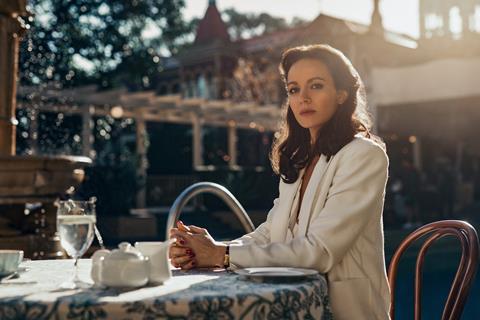 “I could line an actor up on a 50mm but still see a lot more of the world than I would on a smaller sensor with less distortion in the field of view. I love the look too. Its filmic and the skin tones are very natural. In this case, the Ultra Panatar lenses have quite a unique 1.3x stretch factor which means you are almost using the entire sensor by the time you de-squeeze to 2.40 widescreen. It’s also not quite the 2x anamorphic look and nor is it quite spherical. It’s original. So the scale felt cinematic with a touch of anamorphic. It didn’t take long to sell it to Steve and the director.”

Shantaram is a story that you can imagine being shot in an LED Volume, a decision that would certainly have eased Covid-shooting restrictions which were pretty draconian in Australia and India at the time. The idea was discussed but never felt right.

“The more we looked into the actual locations the more we felt we could shoot there. A few scenes are shot on stage. For Karla’s apartment, for example, we hung a 40-metre print of Bombay outside the window on stage in Victoria, but most of what you see in shot is real. The exposure is real. 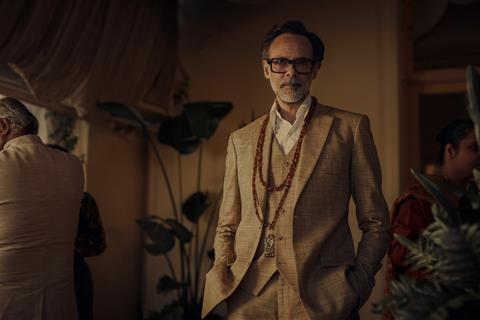 “There was also some talk about shooting Reynaldos in a studio but when we saw the location in Bangkok the idea of surrounding the bar with extras and vehicles and fruit stalls which could all be felt on the edge of the frame just made the scene more alive than shooting on stage.”

Apple retained Duscio and Kennedy as consultants after main photography ended while a second unit team shot in Mumbai. Over several months they gathered cut aways, VFX plates and landscapes worked closely to a prescription per episode provided by the creatives for insertion into the edit.

Duscio shot half the episodes and Robert Humphreys ACS the other six. Series directors include Bharat Nalluri (Spooks: The Greater Good) and Justin Kurzel (True History of the Kelly Gang).