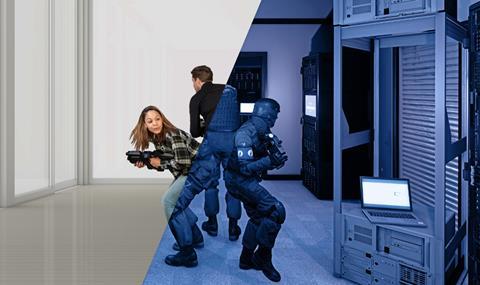 Location-based Virtual Reality is the latest form of ‘experience’ entertainment. LB-VR venues are popping up around the world to offer a variety of multi-player exploration and combat adventures. While some of the experiences are competitive and combative others are more collaborative and are attracting corporate clients for team building.

Players are typically equipped with a head mounted display (HMD) through which they see and hear their virtual environment. The adventure is preloaded on powerful backpack PCs worn by each player which render the high-quality graphics and audio while allowing relative freedom of movement around the immersive gaming space. Sensors installed in the venue feed location data to each backpack over Wi-Fi to accurately position players in their virtual environment. Players interact with weapons or other hand-held controllers.

The high-performance gaming hardware is expensive, fragile and operationally challenging. Streaming the VR content to a standalone HMD over a low latency 5G wireless connection could provide a more flexible and lower cost alternative to the synchronised but relatively cumbersome backpack PCs. An IBC Accelerator has been set-up to investigate the potential of a 5G centralised streaming model to enhance the user experience in LB-VR venues.

The Accelerator’s Champions also believe a 5G model could create new business opportunities extending the market for LB-VR content beyond dedicated venues to the home and even mobile “pop-up” installations. The proof-of-concept will also allow VR content-owners to experiment in a 5G environment.

Participants: Technology vendors and partners will be announced soon

The project is being led by Belgian converged connectivity and content services provider Telenet. As well as an extensive cable broadband infrastructure across the Flanders region, the company is also a mobile network operator and is currently preparing to transition from 4G to 5G technology. Telenet is also a significant producer of Flemish language television content.

The Park Entertainment, a Telenet venture which already runs eight LB-VR venues, is a co-champion. The Park has partnered with a game studio which creates the company’s VR experiences – including some based on Telenet-produced TV series and storylines such as “The Mole”.

Industry analyst Greenlight Insights estimates that the market for VR experiences at dedicated entertainment venues reached $1.5 billion in 2019. In a report published in March, just as the disruption of the COVID-19 pandemic was beginning to take hold, the analyst was forecasting that the market would expand to 14,700 locations worldwide and $4.6 billion in revenues during 2020.

The total market size for LB-VR content is constrained by the current venue-based business model. Acquiring the venue, the player equipment and setting up the tracking system is capital and labour intensive. Once operational player equipment needs to be cleaned and recharged between sessions. The cables that link the PCs to the HMDs are vulnerable to breakages and need to be carefully maintained. In this Covid-19 era The Park has adopted intensive hygiene measures including UVC and Ozone cleaning and alcohol disinfecting of HMDs and backpacks.

Arthur Lian, project leader and chief engineer of Telenet Corporate Development compares today’s HMD market to the smartphone market of 2008: fragmented by software, hardware and operating system. Different HMDs are also very particular about the streaming solutions they will work with. “The link between the HMD and the streaming solution is very direct – it’s how the market is right now,” said Lian. 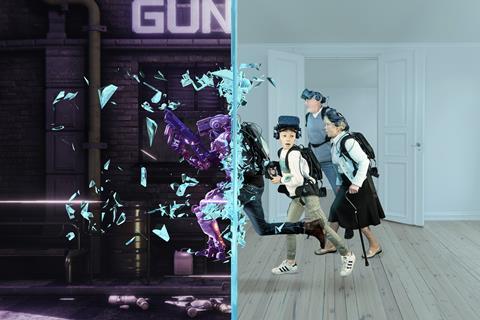 Standalone HMDs do exist but none yet appears to offer all the required functionality. For the Accelerator, Lian would like to experiment with an Android-based HMD capable of playing a 4K stream. The HMD also needs to be able to report its real-time location and controller data back to the streaming server. Lian is keen to directly involve an HMD player in the project which, he believes, has the potential to democratise LB-VR and help transform it into a mass market entertainment format.

The project team is also keen to investigate whether a live streaming approach could reduce the incompatibilities between games and different makes of HMDs. This could be game changing for the industry – expanding the addressable market and revenue opportunities for LB-VR content studios while increasing the choice of titles and the appeal of the genre to consumers.

Graphics will be rendered in either a private cloud or in the 5G network’s edge compute resources: the HMD will act as a client. Such a transformation would significantly reduce upfront capex requirements for the venue business case.

Different content types will be tested to better understand how each performs at 5G speeds and latencies.

Wireless streaming has been tried before. Content has been streamed from servers local to a venue over a private Wi-Fi network. However, contention for the available Wi-Fi bandwidth form other users impacts streaming quality.

As a commercial proposition, Lian anticipates a 5G-streamed LB-VR service would be offered over a dedicated 5G network slice with its own guaranteed QoS.

The ability to stream over wide-area 5G networks would enable LB-VR venues to be built into trucks which could be taken to festivals or theme parks to expand consumer awareness and attract new audiences.

The logical extension to the pop-up venue is to let people play at home. With Covid-19 constraints on many entertainment venues, the residential market could be a saviour for stakeholders throughout the LB-VR value-chain.

The Park has recently launched a trial “try at home” short term proposition. Consumers can borrow the gaming equipment from selected Telenet high-street retail stores to enjoy VR experiences at home. The current service uses simpler standalone HMDs which means not all of The Park’s venue-based content can be offered.

The Accelerator will also explore the feasibility of serving multiple players dispersed across multiple locations and providing consistent LB-VR gaming experiences across all settings.

The findings of the Accelerator could transform what is currently a niche into a mass market for broadcast quality experiences that could appeal to other leading content IP owners as well as gaming studios.

In the absence of IBC2020 the IBC Accelerator programme continues to help broadcasters, studios and media & entertainment organisations collaborate to drive innovation throughout the year. By providing an environment for remote/virtual multi-company R&D, the Accelerators have come into their own in the current crises.

The Accelerators will feature in IBC Showcase that will take place online from 8-11 September.