Returning to a physical show after its pandemic hiatus, NAB 2022 will host attendees from 154 countries and 900 exhibiting companies from 23-27 April at the Las Vegas Convention Centre. Here’s just a sample of what will be new on the show floor.

Running in the public cloud, Aviator requires only a web browser and internet connection to securely access and operate all aspects of the platform. It provides fully automated operation of thematic channels and supports the demands of premium services. 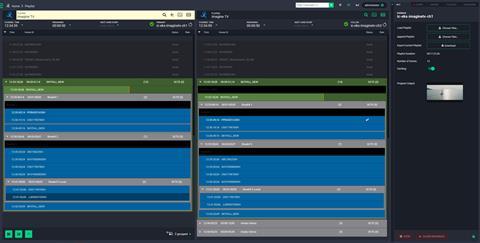 Tedial (C3036) is introducing smartWork, a ‘no-code’ media integration platform. Aligned with Movielabs’ 2030 Vision for Media Creation, it aims to democratise business processes, empowering users to define integrations autonomously - without vendor participation - and create workflows in a flexible and agile manner. A common user interface enhances the user experience and ensures easy access to all applications, external systems (including any legacy MAM) and features self-validation.

SaaS firm Beam Dynamics (W7135C) has built on its NAB 2021 Pilot Innovation Challenge win to launch the BeamON technology management and product intelligence platform. This gives engineers access to all critical security patches, firmware updates, documentation and contact information from over 5000 vendors and close to 500,000 products in the film and broadcast industry, driven by AI and using a single, web-based user interface. Customers need only upload an asset list to migrate their inventory data into the BeamON platform and match it to vendor data.

Claiming to deliver storage enhancements without increasing the environmental impact, GB Labs (N1631) will launch HyperSpace Generation 3, the latest iteration of its rack-based SSD accelerator. The company says HyperSpace gives users access to the fastest data rates on the market when combined with GB Labs Space and Space+, and eliminates the need for customers to install additional racks of storage to support ‘peaky’ usage. GB Labs will also debut the latest versions of its FastNAS and Unify Hub solutions.

Bridge Technologies (W5604) will showcase new signal generation functionality in the VB440 – a high-density IP media traffic monitoring probe for core broadcasting networks and production studios. It now allows for placeholder reference signals to be generated when setting up a studio, thus allowing for the network to be checked without needing to fully assemble all network components. These placeholders can also be used to measure and test network performance for elements which are not due to be integrated into the studio setup until later in the workflow. Users can manually set placeholder reference signals through the GUI itself, or through NMOS.

Ateliere Creative Technologies will demonstrate Connect/Parcel, a workflow module of its Ateliere Connect cloud-native digital supply chain platform. It builds on the platform’s newly announced support for Apple iTunes packages via Apple Transporter using the ITMSP format, streamlining the delivery of all types of video content to the Apple storefront for electronic sell-through or streaming on Apple channels. Ateliere will also highlight expanded support for delivering content to Amazon channels.

On stand CL2, showgoers can experience The Unreal Ride, an immersive activation by MRMC and Vū Studio that combines motion control with virtual production, utilising a huge LED wall, a futuristic motorcycle and the Bolt X cinebot. Mo-Sys (C6127) will co-exhibit with Fujifilm and APG Media to deliver a live demonstration of the latest LED virtual production technologies.

For-A (C5408) is expanding its focus on live sports production with the introduction of the SMV-ONE, an HD slow-motion visualiser, which creates smooth slow-motion footage from live or archived video. Also on show is the FT-ONE-SS4K 4K ultra slow-motion camera, upgraded with colour matching presets with third-party cameras, an advanced workflow and integration with EVS servers.

Also debuting is the MFR-3100EX routing switcher with NDI support, a switcher, router and frame synchroniser in a single 4RU-sized unit. It configures a matrix of up to 64x72, with up to 4 inputs/4 outputs for 8K signals or 16 inputs/18 outputs for 4K UHD, and input channels can be monitored via web browser. Multiple units can be used together, enabling matrix expansion and redundancy.

On show from Hitomi Broadcast (N2331) is a new latency feature for its MatchBox audio video alignment toolbox, aiming for complete timing quality control assurance. It measures the actual time of flight of video signals from the front of multiple cameras or at various points through the broadcast chain with milli-second accuracy. A measurement is taken by holding an iPhone up in shot running the free MatchBox Glass app. A signal is then sent back to the MatchBox Analyser located in an OB truck or MCR. The company says this simplifies the task of measuring latency, and additionally gives a lip-sync reading. 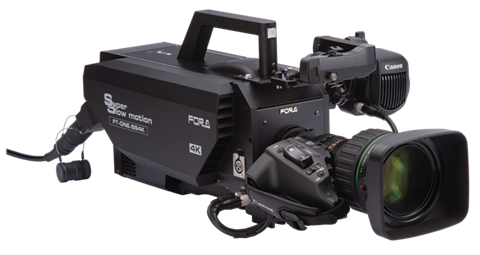 NAB will be the first opportunity to see the MagTrax guidance system from Motion Impossible (C6746) in the US. This drive-end upgrade for the Agito robotic camera dolly allows operators to follow a magnetic strip laid on a surface, underneath a carpet, or embedded within a set. The magnetic strip can be arranged in various creative ways that are not possible with conventional dolly track, claims MI.

Haivision (W5202) has advancements and updates in IP video contribution technology, including the PRO460 bonded cellular transmitter series for remote and at-home video production over 5G networks, the Makito X4 Series of video encoders and decoders for real-time quad-HD and 4K video encoding and SRT streaming, and live video tools StreamHub, LiveGuest and Haivision Hub. As well as showing how the company’s acquisition of Aviwest earlier this year will impact broadcast video contribution, the company will also be exhibiting at the Grass Valley stand (C2107), following the recent partnership announcement between the two companies.

LiveU will demonstrate its recently launched Air Control, a cloud collaboration solution to get remote guests on air and live feeds into the system, giving crews the ability to manage all the human elements of a multi-guest production effortlessly and with true broadcast quality. Also on show is its new native 5G compact video transmission solution, the LU300S. With a headline offering of 4K 10-bit HDR high-quality video over 5G networks the unit offers broadcast-quality video streams with support for up to six IP connections, including four 5G/4G cellular connections, WiFi and LAN. 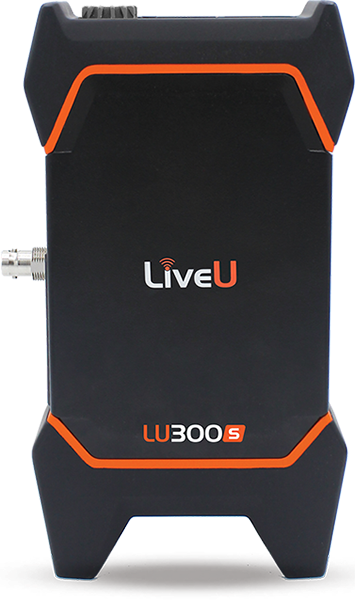 Rohde & Schwarz and Qualcomm Technologies have partnered to deliver a full end-to-end live 5G broadcast/multicast streaming demonstration at NAB. During the demonstration a live signal will be transmitted from the Rohde & Schwarz stand (N3625), using sectorised antenna systems to a smartphone form-factor test device from Qualcomm. Pre-recorded content will be encoded by Ateme’s Titan, and the transmission chain powered with a filter and a sectorised antenna system provided by Dielectric.

Glensound (C6709) will launch its GMT interface for esports audio, which combines multiple functions required to support both interfacing and communication during an esports tournament.

Flowics (W9726) has a new Assets Library that provides a central online repository for users of its cloud-based Flowics Graphics to collaborate and share creative assets without having to rely on third-party tools for online storage. It’s also showing a new feature to enable graphics operators to preview graphic overlays directly in the remote-control interface before taking them on-air, as well as a growing catalogue of native data connectors for sports, finance, news, esports and betting. 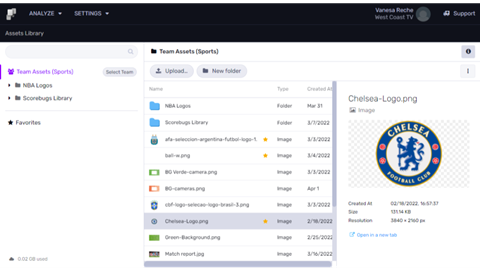 As well as updates to Premiere Pro such as an AI-powered colour correction tool, Adobe will be showing Frame.io for Creative Cloud, following its 2021 acquisition of the video collaboration platform. This will include free sharing, with an unlimited number of external reviewers, accelerated file transfers and 100GB of dedicated Frame.io storage, which will be separate from the existing Creative Cloud storage plan.

Frame.io for Creative Cloud is available in the latest versions of Premiere Pro and After Effects

The Vidispine team from Arvato Systems (N5014) is showcasing its MAM solutions, such as media service platform VidiNet which now includes functionality for face recognition and automated quality control. The MediaPortal cross-platform media searching, finding, collecting and sharing system is now available as a SaaS solution on and through the VidiNet platform, while a new ‘SaaS for Metadata creation’ system has been built in partnership with DeepVA. Also on show is integration with MoovIT’s Helmut project management solution. Helmut creates and manages Adobe Premiere Pro projects and makes them accessible in Vidispine products like MediaPortal. Stream Engine, the underlying control element of Helmut, can automatically upload rendered videos to the VidiCore media management backend and trigger any desired workflows.

Lately transitioned to cloud-based solutions, Cinedeck (N5016) is showing Cinedeck CD2. This enables multi-camera ingest of a wide range of input formats ready for editing and can distribute live thanks to Edit While Record and Playout While Record features. For non-live, ingested content can be scheduled using the Cinedeck multichannel control app. Also on show, Cinedeck Capture 2 Cloud aims to simplify on-demand cloud encoding of edit-ready formats. 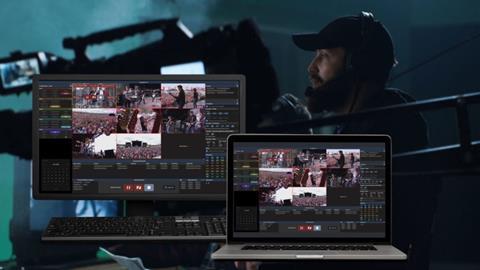 Codemill (W541) will be demonstrating the latest features of its Accurate.Video and Cantemo products. Latest updates to the former include the addition of workspaces for ad breaks, video, audio, subtitle and time-based metadata compliance, localisation and content versioning QC, as well as more support for dealing with audio. The latest version of Cantemo, now available as a subscription model, adds support for remote proxy editing workflows, using Adobe Premiere and Final Cut Pro X, enabling seamless integration between the editing tools and Cantemo. It also includes support for Vidinet APIs.

The NAB 2022 seminar programme is packed full of insights from across the film and broadcast industry. 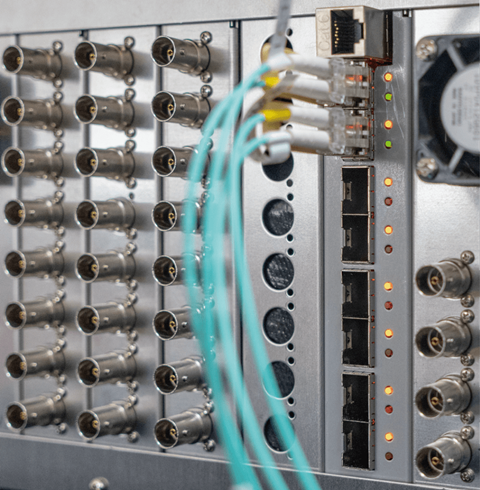 Opening the run of content on 24 April, the Main Stage sees veteran journalist and host of NewsNation’s Banfield, Ashleigh Banfield, hold an intimate conversation with Lester Holt, anchor and Managing Editor of NBC Nightly News, prior to his acceptance of the 2021 Achievement in Broadcasting Hall of Fame Award later the same day.

The NAB Show Welcome on 25 April includes a keynote by NAB President and CEO Curtis LeGeyt, and will also see actor, director and educator LeVar Burton (Roots, Star Trek: The Next Generation, Reading Rainbow) honoured with the first-ever Insight Award from the Library of American Broadcasting Foundation (LABF) in recognition of his contributions to broadcasting, history and American culture. Also during this session, NAB will present the NAB Distinguished Service Award to Gordon Smith, and the National Radio Award to Caroline Beasley.

Also on 25 April, the session Good Is No Fun at All: The Making of ‘The Bad Guys’ will take attendees on a deep dive into the just-released animated feature. The Hollywood Reporter’s Carolyn Giardina will discuss with Director Pierre Perifel and Editor John Venzon the creative decisions behind their adaptation of the New York Times best-selling book series.

TikTok takes over the main stage on 26 April as Carly Zipp, Global Head of B2B Marketing at the short-form video platform, takes part in a live Q&A with NAB’s Jonathan Toomey in A TikTok Tale: Entertainment That Connects.

There are numerous other sessions throughout the show, including a programme of events by NAB Show’s Cine Consortium. The hour-long Cine Live sessions take place daily and feature leading producers and directors discussing the skills, techniques and creative vision required in today’s storytelling environment. Session topics include the making of the Super Bowl Halftime Show, cinematic multi-cam performance captures, and a look at the merging of cinematic and broadcast talents with Fox.