Netflix is to launch its new lower priced ad supporting tier in 12 countries in November. 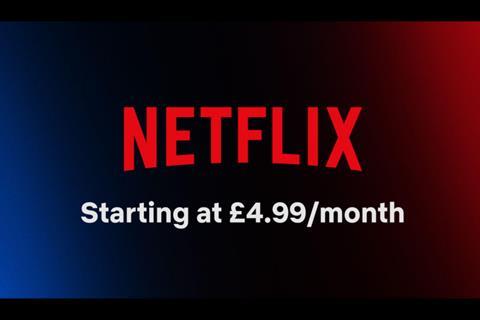 Netflix will introduce a ‘Basic with Adverts’ tier in November

The service will be offered in 720p/HD, with an average of 4 to 5 minutes of adverts per hour. Netflix said a limited number of films and TV series won’t be available due to licensing restrictions. Basic with Adverts subscribers will not be able download titles.

At launch, adverts will be 15 or 30 seconds in length which will play before and during series and films.

To help advertisers reach the right audiences, Netflix says it will offer broad targeting capabilities by country and genre (eg: action, drama, romance, sci-fi). Advertisers will also be able to prevent their adverts from appearing on content that might be inconsistent with their brand (eg: sex, nudity or graphic violence).

The service will launch ahead of Disney’s $7.99 ad-supported tier which arrives on Disney+ on December 8.

Netflix has partnered with Microsoft to deliver the ad tier. Nielsen will measure US viewership and use its Digital Ad Ratings in the US which will become available sometime in 2023. Netflix has struck up partnerships with DoubleVerify and Integral Ad Science to verify the viewability and traffic validity of its ads starting in the first quarter of 2023.

In a statement, Netflix said: “The switch from linear is happening at an ever increasing speed, with streaming now surpassing broadcast and cable in the US. We’re confident that with Netflix starting at £4.99 a month, we now have a price and plan for every fan.”