Timeline TV is no stranger to innovation, but by adapting kit from Blackmagic Design and Apple, it has created broadcast quality lightweight workflows for remote production. Michael Burns finds out what its R&D team developed and how it has paid off in these socially distanced times. 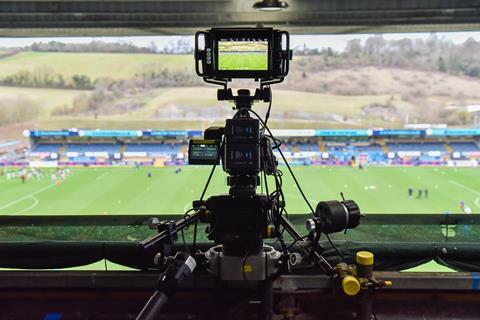 Even before Covid-19 had such a seismic effect on broadcasting, facilities companies were working on innovative ways to control live productions remotely. One such is Timeline TV with bases in London and MediaCityUK, which as well as providing remote production services using global fibre connectivity, has developed both lightweight and mobile systems for this purpose.

Primarily designed for the BT Sport coverage of last season’s Women’s Super League (WSL – the highest English women’s football league), Timeline developed a H.265 based 4G bonding and IP transmission solution based around the URSA Broadcast camera from Blackmagic Design and the Blackmagic 3G-SDI Shield for the Arduino minicomputer.

“We wanted a solution to do remote production football which was cost-effective,” says Timeline managing director Daniel McDonnell. “We would have a camera operator on site, but the engineer who did the colour balance and the exposure and the setup of the camera would be in our Broadcast Centre in Ealing. We worked with Blackmagic to get all the [camera control protocol] information and then designed our own hardware and wrote our own software to allow us to fully rack the camera from Ealing over the public internet.”

Match day
Timeline chose the URSA Broadcast as the workhorse camera for its remote WSL coverage, a broadcast camera that comes equipped with a 4K image sensor and ⅔in B4 lens mount and is capable of recording to SD cards.

“We could have used some other camera, but when we’re covering football, we do everything from a single camera match to a four- or six-camera match,” says McDonnell. “So, we needed a camera that could both be a camcorder for recording interviews and also switch seamlessly into being a full OB camera.

“Normally on matches we would use a Sony HDC-4300 with a big box lens on it and a big viewfinder,” he continues. “That’s not suitable for then taking it off the mount and putting on your shoulder and going and shooting an interview. With the URSA, the camera operator can turn up, rig the camera on the gantry with a big lens and the studio viewfinder, and we can control it all remotely. Then they can very quickly unclip the studio viewfinder and the big lens and put on a small monocular [viewfinder]. It’s got a built-in recorder so they can then go down and record interviews and team arrivals and then come back to where our transmitter is and transmit all that footage. It’s probably one of the only cameras that you can use as a true match camera and an ENG camera, all in one.

“Until the football got cancelled because of Coronavirus, on a typical day we’d have between eight and 12 cameras out there,” McDonnell continues. “There were six WSL matches on the Sunday, and we’d have multiple cameras on some of them and single cameras on the other. But the operator was in Ealing controlling all the cameras. You could look at one camera and it could be in the north of England, where it’s absolutely chucking it down, and you can look at another camera which is in the south of England and it’s a bright sunny day. One operator can control all sorts of different problems” 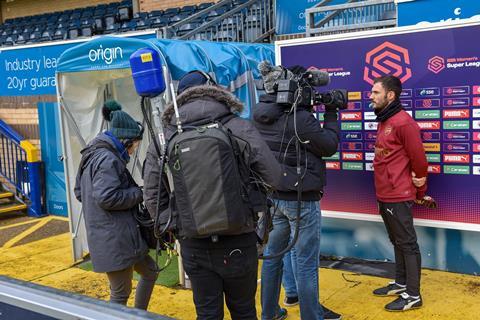 Timeline: Uses the URSA Broadcast camera to easily switch from an OB camera to recording interviews

For camera control data, input to the Blackmagic camera is compatible with an industry-standard video cable.

“Normally you connect the output of a vision mixer to the input of the camera, and then the vision mixer sends all the data for cue lights and racking information down that video signal,” says McDonnell. “Blackmagic realise that people might want to do that without the vision mixer, so they have a little card that allows you to do that. Their idea is that you connect to the camera with a BNC cable from that board. You can use an ATEM mixer to control it and you can write your own software to do that.”

The solution wasn’t quite match-ready for the WSL, however. “The protocol and the board that Blackmagic sell wasn’t designed to work over the internet,” says McDonnell.  “Since we wanted to actually turn that into an internet device, we had to write pretty complex software. We exposed every control that Blackmagic allowed us access to. Our in-house R&D team designed the hardware and software, then we had it manufactured.

“Those SIMS all join onto the mobile phone network,” says McDonnell.  “Each SIM can do 2Mbps, so we get 16Mbps of bandwidth available to us, and because the Mobile Viewpoint has good error correction and encoding in H.265, we get a very high-quality picture. Going back there’s a full broadcast picture that you’d be hard pressed to tell wasn’t on cable.”

The solution sets up an internet tunnel and the encoded signals travel over a VPN into Ealing.

“We spent a long time finding a suitable VPN that would that would run off DC, was very small and had low power consumption,” explains McDonnell.

“We wanted a solution to do remote production football which was cost-effective,” - Timeline managing director Daniel McDonnell

As well as the high-resolution camera signals, an additional low-res feed is sent carrying all the necessary camera settings over the VPN from Ealing.  This control data is converted into information compatible with the Blackmagic kit. Key to the process is the Blackmagic 3G-SDI Shield for Arduino.

“All of our software is programmed onto that,” says McDonnell “It converts [the networked control data] into information that Blackmagic understands. The Blackmagic card then turns the inputs into a video signal, which then goes into the camera. We can now do everything from focus to controlling all the colours and the black levels and the gains – every function on the camera – from Ealing.”

“We built a medium sized rucksack that contains dual batteries, the VPN, the Mobile Viewpoint, the Arduino Shield and the Blackmagic card in a box, and the hardware for controlling it all,” McDonnell continues. “It’s all broken out onto connectors on the sides of the rucksack underneath a waterproof covering. For things like ‘teams out’, when we’ve got four cameras at a football match, the camera operator would wear the backpack and walk onto the pitch with the camera with the small lens on it – it looks like we’ve got a radio camera – and they can track the players coming out and things like that.  If they’re doing a normal match camera, they would stand the backpack on the floor and extend the aerial and then it just works. It’s like a mini OB hub.”

Going live in isolation
McDonnell says the solution “eliminates the requirement for a full, static router, which normally is in place for a camera control unit to feed through”. It has also proved to have an unexpected extra application. 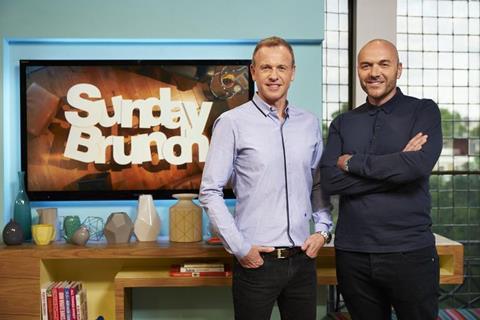 Sunday Brunch: Is just one of the programmes using this technology during lockdown

“This technology was designed for the football, but since the coronavirus, we’ve used it to be able to deploy cameras that we can remotely control into people’s houses – where we’ve done full broadcasts from,” says McDonnell. “Programmes like Sunday Brunch (C4) have had these cameras in the houses of the presenters, and we’re able to remotely control the white balance and everything. We’ve used it a lot on BT Sport – we have one in [host] Jake Humphreys house. We’ve had them in celebrities’ houses up and down the country, all being remotely controlled from Ealing. It’s been hugely adapted and we’re providing hundreds of remote working solutions.”

However, another remote solution developed by Timeline uses an even smaller setup.

“Before the coronavirus, we wanted a super lightweight camera solution that was broadcast quality, something cheap when we needed to put cameras on cars or boats or yachts,” says McDonnell. “We spent a long time looking into it and we decided that the iPhone 11 Pro was an amazing camera. It’s got H.265 encoding, it’s got an amazing lens on it, and it’s got good battery life. We then spent about a year writing our own iOS app using all of the iPhone 11 API’s that Apple publishes. We could deploy that iPhone, get amazing quality pictures back from it and fully control it from Ealing. So, it’s a similar sort of concept; the iPhone obviously has got a built-in SIM, but we don’t need as much bandwidth as [the Blackmagic solution].

“We just finished that development when the Coronavirus hit,” he adds.

Since then, Timeline has been sending out the iPhone kits, day in, day out, to celebrities or sports stars.

“We’ve been using hundreds of them,” McDonnell says. “We can’t go to their houses [because of social distancing] but we can we can post them a kit which comes with an iPhone, a tripod, an iPad for reverse vision, radio mics and cable mics and an instruction video. The app is designed to be completely user-friendly for the talent themselves so that we don’t need to deploy anybody. We’ve had very famous people setting them up themselves and then doing live inserts into our programmes.

“It doesn’t look like the quality like you see on the news every day with Skype calls or Zoom calls, you can’t really tell the difference between the iPhone and a proper camera. We’re doing three or four programmes with this technology every day – we’ve got them all over the place.”

Life after lockdown
You might say Timeline had almost been prepared for the crisis.

“We were we were very fortunate. We’ve been doing remote productions for two years and really believing in it with things like the sail GP and the WSL, and Formula One. We were very well positioned,” agrees McDonnell. “When it became the only option for television, we were able to take everything that we’d learned on those programmes and move it into more mainstream programmes. We did Keith Lemon Celebrity Juice (ITV) during lockdown, and we’re currently doing all of the Bundesliga football for BT Sport, all done remotely.”

There’s a question whether, after the pandemic, either of Timeline’s lightweight remote solutions maintain their position in light entertainment, or if they’ll just head back to the sports arena.

“It depends on how we come out of lockdown, but I don’t think we’ll have lots of studio guests flying the world, coming into studios with shows with audiences and all that sort of thing, for a long time,” says McDonnell. “I can see that certainly for some time, reliable systems for being able to do remote contributions are going to be required. Obviously, the people prefer to be in a big studio and everything. It just depends how, how we progress in the next few months.”