From single wire sunglasses that save on plastic waste to a news website that aims to combat fake news, Impossible duo Lily Cole and Kwame Ferreira are looking to incubate business ventures that share their altruistic vision for the planet. 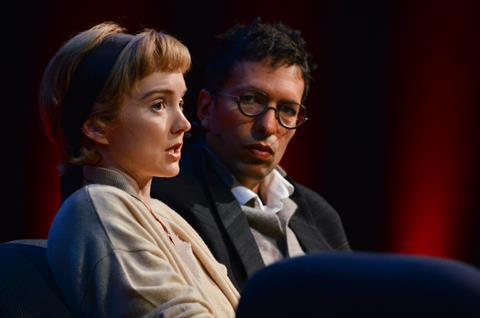 Speaking at Monday morning’s Innovation keynote, the former supermodel and her partner Ferreira, an entrepreneur, said that the growing array of start ups and scale ups that they incubate take a ‘planet centric’ approach to design.

Ventures include a modular designed sunglasses brand, Wires Glasses which makes its product out of a single piece of wire that saves on screws and uses 3D printing to save on acetone waste .

An Amsterdam-based venture Fairphone, meanwhile, claims to be the world’s first ethical, modular smartphone producer, producing units that contain no conflict minerals and are designed to be easily repaired and upgraded.

“We support the idea of challenging the planned obsolescence that is modelled into many device businesses’ share prices. Fairphone wants to extend the life of these devices and its modulatory will allow us to stay with devices longer,” said Ferreira

Impossible, an incubator group which takes its name from Cole’s skills sharing app which she launched in 2013, also helps existing businesses support ‘Planet Centric’ design through an open-source app that claims to build environmental thinking into their work processes.

“We support the idea of challenging the planned obsolescence that is modelled into many device businesses’ share prices.” Kwame Ferreira

Deployed in 97 cities Ferreira said that Impossible was constantly validating and updating the app. “Every creative process should start with an environmental conversation at the very start. The app is encouraging businesses not to leave it to the end to try and offset carbon footprint,” Ferreira added.

Asked how broadcast technology companies could adopt planet-centric design Cole, who has been long been an advocate for sustainability, said that moves such as examining their operations, production and even their office supplies can make a difference: “Any printer in the UK can now use carbon balanced paper”.

Cole added that content creators also need to continue to tell powerful stories and she uses the final episode of Blue Planet 2 as a case in point.

“Blue Planet has had a phenomenal impact in highlighting the plastic litter in our oceans. Storytelling as a device can be a million times more successful that what an NGO can tell people about saving the planet,” she said.

Other media ventures that Impossible has helped fund include Wikipedia Founder Jimmy Wales’ crusade against fake news, the Wikitribune Project which pairs experienced journalists with an army of community contributors.

“It opens up questions about what media is and how do you fund it. It is a petri dish of experimentation and we were glad to be a part of kick starting it,” said Ferreira.