From planning to presentation to post-production, there have been a lot of new product introductions for broadcast news use over the past few months. David Fox looks at some of the highlights. 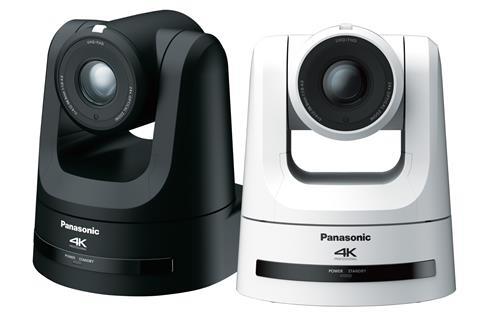 Despite coronavirus lockdown, news media has continued to work. The industry has responded to some of the challenges of producing news with limits on production by launching new solutions.

Dalet has made major usability improvements to its On-the-Go mobile app for smartphones and tablets as well as its underlying Dalet Galaxy five news production and distribution platform.

The iOS and Android app is designed to boost the collaborative experience between remote journalists and the newsroom, offering advanced content contribution and remote planning capabilities via a new interface.

The Associated Press ENPS team has partnered with workflow developer Latakoo to enable assignment tracking and file delivery across both company platforms. This takes advantage of the capabilities of Latakoo’s recently launched Manifest, an intelligent collaboration tool that facilitates the discovery, tracking and request of media files, making it easier to work together on stories.

It is designed to integrate into a facility’s ST 2110 infrastructure without additional IP gateways, and supports baseband and IP signals in any combination. It also features uncompressed processing of SDI, ST 2110 as well as NDI streams of any resolution such as HD and UHD and in any format, whether 16:9 or non-traditional formats such as 32:9 for an LED backdrop display. It can also work with HD and UHD sources simultaneously, upscaling or downconverting as necessary – or cropping an HD region from a UHD source. 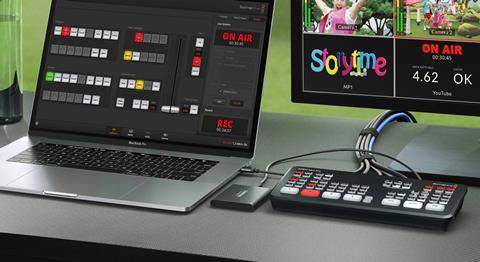 A lower-budget system for live production is the new Blackmagic Design Atem Mini Pro, which includes extra features for recording, streaming and monitoring. The $595 unit can switch live between four high quality video camera inputs and is useful for news or on-set presentation work, as it has an upstream Atem Advanced Chroma Key plus an additional downstream linear keyer. It can also do title overlays by creating graphics with a green or blue background and the keyer will knock out the green and make the background transparent.

Telestream’s new Lightspeed Live Capture C2 dual-channel ingest system is claimed to combine lowest cost access to capture plus Vantage media processing. It should be particularly suitable for enterprise-scale workflows, such as news and sports, that rely on remote production and editing. It is designed to make the ingest and media processing workflows used for large scale events viable for smaller, less complex instances.

The new system captures two concurrent HD inputs up to 1080p60 while generating a low-res proxy of the content. The server includes powerful tools such as simultaneous edit-while-capture, transcode-while-capture and deliver-while-capture. 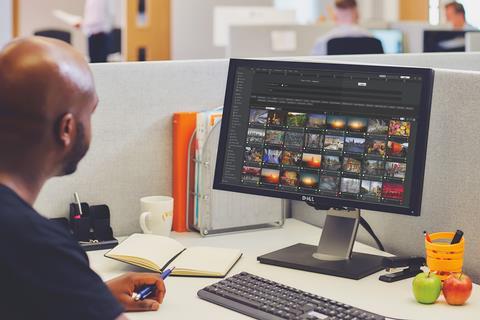 Vizrt: Upgraded Viz One and Viz Story to now integrate for better storytelling

Another useful new tool to cope with social distancing is Vizrt’s ‘teleportation’ system that can bring journalists separated by physical distance together in the same studio using its Viz Engine 4.1, which it believes “could become the future of remote live interviews.”

Using IP and the built-in Fusion renderer in Viz Engine 4.1, two individuals located in separate countries can appear to be in the same room having a conversation in a live discussion. Only two frames of latency for audio and video are added in and out, in both SDI and IP mode.

Vizrt has also released Viz One (v7) and Viz Story (v2) to make media editing a seamless part of its live production workflow and create stories faster, easier and better. The packages combine browser-based editing and publishing with a full-fledged metadata backend, to allow journalists and editors working anywhere to edit, publish and re-edit both urgent and complex stories for air with greater speed, ease and quality. 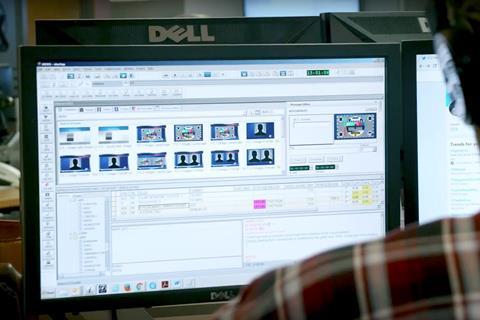 ChyronHego: Camio news platform is ideal for broadcasters using a create once, publish to many model

ChyronHego has updated its Camio news platform, offering integration with the innovative Style Sheets in its Prime Graphics platform, where users now can select a particular Base Scene (a set of colours, fonts, logos, etc) as a Style Sheet parameter that can be changed manually or automatically for different rundowns. For teams using a create once, publish to many model, this ensures that stories have the right look, feel, and graphical elements. The new Camio 4.9 media engine also allows users to rapidly browse, fulfil and import Prime Graphics templates directly via MOS plug-in into any compliant nonlinear editor.

BroadStream Solutions’ new VoCaption live automated captioning and subtitling system is its first new product since it acquired Screen Subtitling Systems, and incorporates AI-based speech-to-text processing that can support live captioners or provide captioning where human captioners are not available. The company claims it delivers significant quality improvements over previous AI efforts, which will benefit hearing-disadvantaged viewers as well as viewers in locations where television is available, but without sound.

VoCaption will be available as part of the Oasys Integrated Playout system, and with the Polistream subtitle inserter. A standalone package that integrates with third party caption inserters will also be available.

Cameras and acquisition
Sony’s new PXW-Z450 UHD 2/3-inch camcorder comes in a production package that includes a 18x Canon zoom 4K B4 lens, OLED viewfinder and shotgun microphone, and is designed for news and live events. 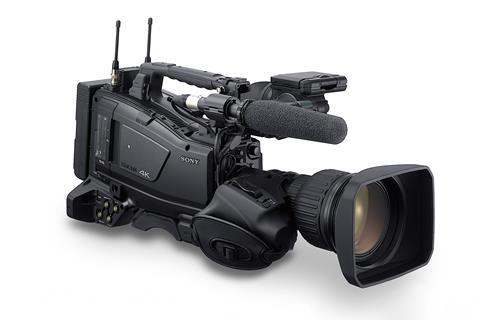 Sony: The PXW-Z450 is claimed to be the world’s first 4K HDR shoulder-mount camcorder

It is claimed to be the world’s first 4K HDR shoulder-mount camcorder, and records 3840x2160 at 50p or 59.94p, as well as a variety of HD formats including: XAVC Intra; XAVC Long GoP; MPEG HD 422; and MPEG HD 420. It can record and output SDR alongside HDR – the latter as Hybrid Log Gamma (HLG) and S-Log3 with BT.2020 colour space. It also has built-in wireless for proxy recording and file transfer or live streaming.

The Associated Press recently selected Sony as its exclusive imaging products and support provider for its video journalists and news photographers globally, including these camcorders alongside its full-frame mirrorless Alpha cameras, such as the newly-introduced A7S III.

It means “photographers working alongside video journalists will be able to share kit, like batteries and memory cards in some cases. But the game changer is that photographers and video journalists will be able to share or swap lenses on certain models. This will give our field teams a great deal of flexibility while on assignment,” said Derl McCrudden, AP deputy managing editor for visual and digital journalism.

“By introducing support for the SRT protocol, JVC Connected Cam can leverage any network to deliver a best-in-class video streaming experience - a powerful tool for content creation,” says Jesús (Suso) Carrillo, director SRT Alliance, Haivision (which developed SRT). “SRT connects edge devices to the cloud in a reliable and secure way, whether it be for live news gathering or transferring files to the studio. With this implementation, JVC Connected Cam ensures reliable cloud-based workflows, whatever the network conditions.” 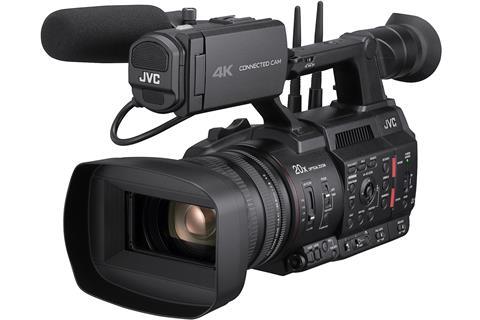 JVC: The GY-HC500 is one of its Connected Cam cameras that now offers SRT streaming

Panasonic has introduced a new IP-based UHD 50/60p camera to its selection of integrated pan/tilt/zoom cameras, and expanded its AK series studio and field camera family with a cost-effective AK-HC3900 1080p HDR system camera that is upgradable to native UHD 60p/50p.

The AW-UE100 PTZ unit is designed for high-quality live remote and studio production and supports high-bandwidth NDI, high-efficiency NDI|HX and SRT. Its interfaces include 12G-SDI, 3G-SDI, HDMI and IP. It has a wide-angle lens with a 24x optical zoom. It has FreeD output for connection with AR/VR systems and allows camera tracking information (pan/tilt/zoom/focus/iris) to build systems without an encoder.

The new AK-HC3900 is designed for users that need 1080p HD now with HDR (it can output simultaneous HDR and SDR), but might want to upgrade to UHD in future. It is introduced alongside a new cost-effective camera control unit and new remote operation panel, which connect the uncompressed video and control to the camera head via optical fibre or SMPTE Hybrid cable to provide camera power.

Telemetrics has upgraded its OmniGlide rover robotic camera pedestal with new machine learning algorithms allowing its shot recall settings to intelligently find the best path within the space it is operating in. This Path Planning means it can figure out the safest way between point A and point B, even when there’s an obstruction like a news desk in between. This is accomplished in tandem with the Telemetrics RCCP-2A robotics and camera control panel running STS software.

Telemetrics has also upgraded its control systems with new artificial intelligence and facial recognition algorithms for the RCCP-2A, which can be useful for automated news production as they can now track several people with multiple cameras simultaneously.

“We’re layering object-tracking on top of our facial tracking, so reFrame becomes more robust,” said Michael Cuomo, vice president of Telemetrics. “When a person turns around, we can still track them because the system intuitively knows that that face and body was there before. Other systems can’t do this.”

The LDX 100 is a high-speed (up to 3x), UHD camera with a new 2/3-inch UHD sensor and native IP connectivity. Its integrated design frees up multiple rack units per camera as it doesn’t need a CCU, simplifying the logistics for mobile productions when having to pair the right number of cameras to CCUs at an event.

The GV K-Frame XP is a compact 8RU switcher suited to multiformat environments and high signal density, even with the increased bandwidth requirements of UHD where no reduction in I/O count, M/Es, keyers or Digital Picture Manipulation is required.

The LiveTouch 1300 highlights and replay system allows users to capture video directly from IP sources and delivers expanded collaborative workflow capability. It has a new HTML5 LiveTouch Dashboard that promises to simplify system monitoring, control, start up and basic configuration.

LiveU has unveiled an all-in-one field unit for live news and sports coverage that provides multi-camera production and transmission over native 5G.

The LU800 supports up to four fully frame-synced feeds in high resolution from a single unit, using IP bonding of up to 14 connections. It can deliver up to 4Kp60 10-bit HDR plus 16 audio channels, and can have up to eight 5G internal dual-SIM modems, supported by high-efficiency internal antennas. The unit’s multi-camera streams can be fully managed by the LiveU Central cloud-based management platform and automatically fed into the LiveU Matrix IP content management and distribution workflow.