How We Built It: Telescope Animation makes a splash with a whale of a tale 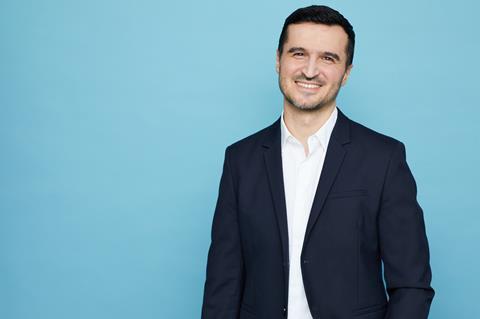 With the tools and techniques being used to create films, games and interactive content growing closer together, a production company based in Germany is taking the transmedia path to content creation.

Telescope Animation is the Berlin-based brainchild of Reza Memari, a veteran game developer and the writer/co-director and co-editor for the animated film A Stork’s Journey.

“We founded Telescope Animation to tell original stories to global audiences,” says Memari. “In order to maximise the reach and life of our IPs, we felt that it would be essential to increase the points of contact with our audience across a variety of platforms. Creating memorable characters and exciting worlds takes many years, so why use them just once?”

The studio was co-founded with Maite Woköck, who complements Memari with her extensive experience in animated feature film production, development and financing. The core of the nascent company was completed by legal expert Henner Merle, writer and dramaturg (literary adviser) Ulla Ziemann and producer Roshanak Behesht-Nedjad.

The first project under development is The Last Whale Singer, an animated feature set for a 2023 release. The film takes audiences to the depths of the oceans with Vincent, a teenage Humpback whale whose father possesses the ancestral gift of healing with his mystical song. 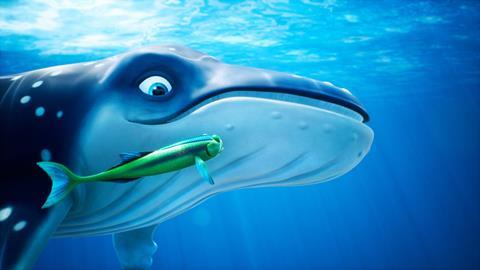 The Last Whale Singer: Set to release in 2023

As Vincent and his companion Percy travel deeper and deeper beneath the sea, fighting off dangers both natural and manmade, the young whale is forced to confront his destiny in order to protect the oceans from an ancient monster.

Based on an original IP, The Last Whale Singer is the first animated feature film selected for development for the German Outstanding Films for Children Initiative. It is partially funded by Creative Europe MEDIA and includes film subsidies from BKM/Kuratorium Junger Deutscher Film and FFA.

Cross platform
But what makes this cetacean story really different is the fact that the adventure will also form the basis for a prequel game. This is currently planned for the Nintendo Switch, as well as the PlayStation and Xbox family of consoles. Though the animated feature will be released as a standalone project, both the film and the game are being developed using real-time game engines including Unreal Engine from Epic Games. This, says Memari, allows for flexibility during development through the use of real-time editing and the sharing of assets between mediums.

“Our focus on quality storytelling, for the entire family across many platforms, may be the biggest difference to others out there,” says Memari. “By utilising Unreal Engine across all our projects, we are capable of creating all the assets all at once, we just need to be mindful of our teams and resources.

“The way we’re scheduling each release, we will produce everything consecutively with some small overlaps. We’ll start the game after the film, but the game will be completed first and be released before the movie is complete. So, while we finish up the movie, the next team can get started on the series, and so on.”

“By utilising Unreal Engine across all our projects, we are capable of creating all the assets all at once, we just need to be mindful of our teams and resources.” Reza Memari

Plans for The Last Whale Singer also include an AR/VR project and an interactive storybook, as well as short-form serial for web, TV or streaming platforms, all using many of the same assets.

“Telescope Animation was founded in part to allow us to experiment with what can be done through modern narrative design across mediums,” says Memari. “With a close-knit team, our strong focus on storytelling and advanced tools, we can allow ourselves to dream big and take chances.”

Co-founder and co-CEO Woköck says: “Our team shares a common vision for Telescope Animation as a transmedia hub, and we are telling stories that are important to us and reflect our values. Having that freedom to tell the types of stories we believe in, without limiting ourselves to one platform or medium, has changed how we look at creating content for increasingly sophisticated audiences who demand more.” 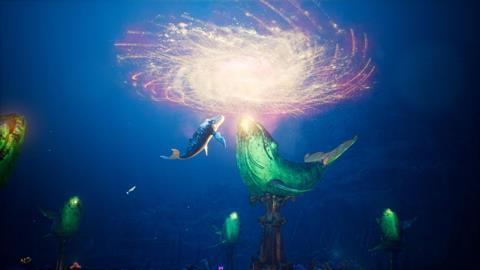 Unreal unchained
“The greatest benefit of going transmedia and using a real-time engine is that everyone will be able to access a central pool of assets, leading to huge cost and time savings with each new use,” says Memari. “Plus, the visual quality will be amazing across all media, since it’s all coming from the same high-res source. There are many challenges too, of course.”

One of these might be the variance in computing power and resolution across different platforms. “Unreal Engine has level of detail [LOD] adjustment built in, so I don’t think we have to worry about differences in quality too much,” says Memari. “We also design all our characters and worlds in a way that lets us be economical, technologically, while still maintaining a state-of-the-art, appealing look.”

The translation from a character within a passive medium into more interactive media might also be seen as a challenge.

“Actually, I don’t think there’s much of a difference when we talk about characters and worlds because our hero Vincent will always be the same across all media and systems,” says Memari. “The trick is to find a natural purpose for the characters and worlds in each medium. For example, I’d love to use augmented reality to turn my living room into a coral reef and have fish swim around while I take selfies with a life-size humpback whale. As long as it’s not gimmicky or cheap, I think it really adds to how we connect to an IP.

“We’re developing all-new schedules, budgets, pipelines and workflows to adjust to the real-time approach,” continues Memari. “In many ways, we’re pioneering a new style of making stuff. Production won’t begin until Spring 2021, but I foresee the biggest challenges coming from project planning and asset management. It’s like playing three-dimensional chess because now we’re not only worrying about the feature film, but also the game, the series and more. It will be so much fun!”

Sustainable ambition
The group has a strong socially and environmentally responsible focus and is aiming to be a zero emissions studio.

“The Last Whale Singer is all about working together to save our oceans,” says Memari. This message really underscores how we, as a company, see our responsibility as well. We’re striving to be fully carbon neutral by the time we begin production and will utilise remote work and conferencing as much as possible.

“We have also entered into a close cooperation with the international organisation Whale & Dolphin Conservation (WDC),” he continues. “We plan to include educational ocean preservation materials for children along with our releases, and we will host beach, river and lake clean-ups among many other things. It’s very important to me that we turn this ship around for the next generations to come.