The 2019 Women’s World Cup is drawing to a close, but the tournament has already broken viewing records worldwide, writes Ross Biddiscombe. 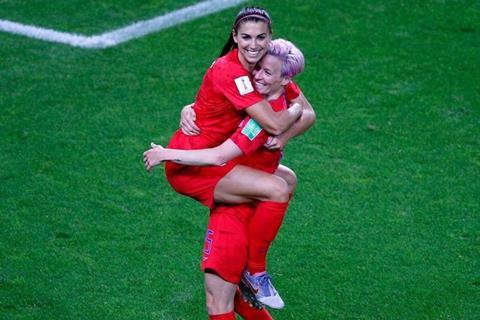 USA: Road to the final

As the 8th FIFA Women’s World Cup reaches its climax (7 July), the remarkable sizes of viewing TV audiences across the globe have been one of the tournament’s most remarkable stories. Record-breaking viewing figures became commonplace and FIFA’s prediction of a total TV audience approaching one billion – compared to 750 million people in 2015 – was set to be achieved even before the finals weekend.

Television numbers were startling from the very beginning with French viewers on free-to-air broadcaster TF1 (9.83 million) and pay TV channel Canal+ (800,000) totalling the highest ever audience for women’s football in France, compared to the previous highest of just 4.12 million. The near-11 million total was even close to last year’s men’s World Cup opening match for France which was 12.6 million viewers.

The month-long Women’s World Cup involved 24 teams from all five continents including all the traditional footballing powerhouse nations such as Brazil, whose TV population loved the tournament. An astonishing 35 million watched one of Brazil’s knockout games on the Globo channel, by far the largest domestic audience for a women’s football match. In Italy, 3.5 million fans tuned in to their country’s first game and, despite a poor early time slot for Holland’s opener, the audience peaked at 2.2 million viewers, making it the most watched broadcast of the day. Meanwhile in Germany, their team’s key early match against Spain was watched by over six million fans and, in China, CCTV reported an average of 12 million people tuning into their first game.

TV bosses in America have been delighted with the audience figures. Group stage matches on FOX and FS1 in the USA averaged 916,000 viewers, a 6% rise from equivalent games in 2015 even with time differences meaning most games being screened in the afternoons.

The figures are justification for Fox’s pre-tournament decision to air more games than ever before – a total of 22 - on its main broadcast network rather than to cable sports channel subscribers.

“It would be an understatement to say the [numbers] are tracking to expectations,” Telemundo Deportes president Ray Warren whose company is providing Spanish language coverage of the tournament in the USA. The USA’s 13-0 victory vs Thailand attracted 444,000 viewers, nearly twice as many as the 203,000 that watched the equivalent match on Universo in 2015. “I think in 2019, people were on the (US team) bandwagon before the first kick. The level of interest just started much higher,” he added.

The audience for the US team’s second group game - a 3-0 win over Chile that broadcast in the US on a Sunday afternoon - proved that the tournament was a commercial winner with 5.41 million viewers across TV and streaming platforms, the biggest US audience ever recorded for a group stage match in the Women’s World Cup. The audience was also up 26% from the US team’s average audience during the 2015 group stage, a significant increase given the games four years ago were in prime time.

“They’ve worked hard on digital platforms, coming up with new ideas to reach the fans and that made the players into bigger personalities and it’s all created a rising tide.” Richard Ayers, Seven League

But according to women’s sports experts, the TV audiences have not been a complete surprise. Richard Ayers, CEO of digital sports consultancy Seven League, worked with the England women’s team and the English Football Association and says the high TV viewing has been the result of several years of work by players, the FA and also FIFA.

“This is not an overnight success,” he says. “Just about all the football associations in the world are now taking women’s football more seriously and so are the broadcasters because the FAs and FIFA are committing resources. Plus, they’ve worked hard on digital platforms as well, coming up with new ideas to reach the fans and that made the players into bigger personalities and it’s all created a rising tide.”

Coming home
The UK has been a particular success story. England’s opening match vs Scotland match logged a highly impressive 6.1 million viewers on BBC1, a number that made it the most watched women’s game of all time in the UK. In addition, it was five times higher than the audience for the men’s team’s third place playoff in the Nations League against Switzerland, albeit that the women’s match was in prime time and the men’s comparison game on a Sunday afternoon. However, record figures then just kept on coming: England’s round of 16 match vs Cameroon (6.9 million for an early evening kick-off): the quarter final vs Norway with 7.6 million in prime time; and finally the semi-final defeat vs USA which kicked off at 8pm again on BBC1 and logged 11.7 million viewers. Astonishingly, the audience was the largest in the UK for any TV programme (drama, comedy, news event etc) for the whole of 2019 up to that point. Also, interestingly for the free-to-air strategy of women’s football, these TV figures have swamped those on the Sky Sports pay TV channels for the men’s Cricket World Cup (averaging around 500,000) which has been taking place during the same period. 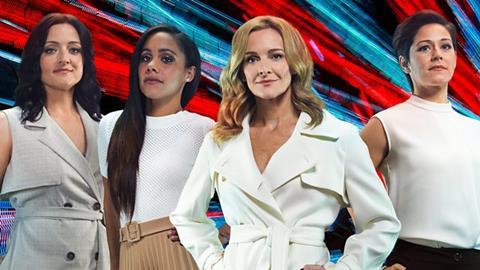 For Ayers, the next few months will be crucial to see if the TV audience momentum can be maintained. “When the hullaballoo is over, then we have to hope that the audiences for the England, Scotland and other national teams plus the Women’s Soccer League in America will show a rise.”

The signs are positive for such an upsurge. A recent report by Ampere Analysis concluded that women’s football actually has a broader appeal than the men’s game and so the World Cup TV audiences were relatively predictable. “The accessibility via free to air cannot be understated,” said Ampere Analysis lead consumer analyst Minal Modha. “In a time when so much sport lives behind a paywall, having a major sport like football on free-to-air is a big deal and I think the tournament is really benefiting from this. Plus, broadcasters have really gotten behind the tournament in a way we’ve not seen before. The BBC launched a huge ‘change the game’ ad campaign in May which put a spotlight on all the women’s sport they’re covering this summer, something they’ve never done before, and they’ve sent a huge in-studio production team out to the tournament, which highlights how high this is on their agenda.”

“In a time when so much sport lives behind a paywall, having a major sport like football on free-to-air is a big deal.” Minal Modha, Ampere Analysis

Experts say another factor in more TV viewers has been social media with many star players very active on platforms like Twitter and Facebook. One of the most powerful social media ideas was the England team announcement on Twitter when each squad member was introduced by famous personalities including James Corden, Emma Watson and even Prince William who told the world that team captain Steph Houghton was on the plane to France.

However, the good news from France is tempered by relatively poor ticket sales. The live attendances at matches in the nine French stadia have been much lower than previous years. With just the final weekend games to take place, the 2019 tournament saw an average of just over 20,000 fans attending each game. In 2015 in Canada, the average match attendance was just over 26,000 with many more thousands of US fans being able to travel north to watch the eventual champions.

But in-stadia atmosphere in France has still transferred to the TV screens so that the long list of tournament sponsors such as Adidas, Coca-Cola and Visa have all been happy and Richard Ayers believes this tournament could be a breakthrough moment for women’s football, both in terms of awareness and commercially.

“For the broadcasters, having such healthy numbers of TV viewers, plus all the digital activity, really pleases the advertisers and programme sponsors,” he says, “so that makes the commercial deals in the future more lucrative for the rights holders. It all becomes an upward spiral, a rising tide, that can only help push women’s football to new heights both in terms of income and audience.”