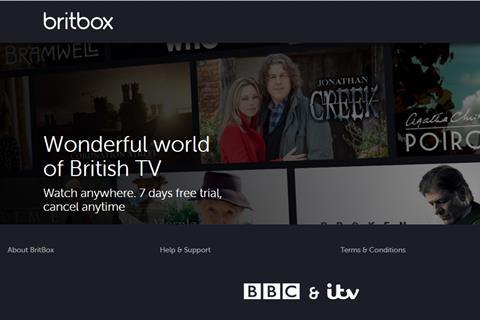 Britbox is set to launch later this year

BT is reported to be considering backing upcoming streaming service Britbox, which is backed by ITV and the BBC.

According to a report in the Telegraph, BT has held preliminary talks with ITV about becoming a shareholder in the service, which will commission some original programmes and be a home for British content that has already aired on its original channel.

The Telegraph’s sources claim that “talks are at an early stage and may not lead to an investment, with differences over the valuation of the venture viewed as a risk”.

BT, ITV and the BBC are already partners in the YouView platform on which BT TV is based.

Talks have also been held with both Channel 4 and Channel 5 about both broadcasters backing Britbox.

In March, Channel 4 chief executive Alex Mahon told the Media and Telecoms 2019 & Beyond conference in London there had been “positive and constructive discussions with ITV and the BBC about how Channel 4 could partner with them to build the scale of Brit Box”.

The BBC, ITV and Channel 4 tried to launch a joint on-demand service nearly a decade ago, known as Project Kangaroo. However, the scheme was halted by competition regulators.

At the time, chairman of the Competition Commission Peter Freeman said the joint venture “would be too much of a threat to competition in this developing market and has to be stopped.”

When Britbox was announced in February this year ITV and the BBC spoke of their plans to launch the service in the second half of the year.

According to the Telegraph, ITV has pledged to invest £25m in Britbox in the first year, rising to £40m in 2020 and then gradually declining once the infrastructure is in place while the BBC’s planned investment has not been revealed.