3-Dimensional Stereoscopic (3DS) and Virtual Reality (VR) productions are generating new artistic concepts and techniques to enable them to take full advantage of the emotive power of these media that incorporate the perception of depth.

This paper looks at how the authors are using innovative ‘visual grammar’ in some 3DS film and VR productions.

They are exploring how the creative aesthetics of these media can enhance the art of storytelling, and improve the user experience for stereoscopic displays and VR headsets.

It is only through the use of screen technologies recently developed for smartphones that VR headsets have become a potential mainstream consumer product.

Most content for this new VR medium is either computer-generated gaming graphics or single-shot live action.

There is very little narrative live action content for this new experiential medium, and the grammar for storytelling in VR has not yet been established.

This paper compares the nature of the visual grammar needed for generating emotive and immersive content in 3DS and VR.

The approach to this research is informed by both practice-based and traditional academic research methodologies for the production of film content, both in 3DS, and now VR.

The film director Sergei Eisenstein, who was a pioneer of the theory and practice of montage, believed that connecting with audiences was at the heart of good filmmaking.

‘In the last essay Eisenstein ever wrote, the master of montage characterized stereoscopic cinema as “a dream of unity between spectator and actor”.’ (1)

Understanding how to create this “unity” using 3-dimensional visual grammar is the central theme of this paper and the accumulated film work of the authors.

The authors have between them watched and reviewed over 300 items of 3D content, either seen in a cinema, film festivals, from Blu-Ray discs, 3D television broadcasts or YouTube.

STATE OF THE ART

The following sections describe some of the 3DS techniques that have been applied by the authors in their productions. The paper then looks in more detail at their latest research findings.

Walk On The Wild Side

The authors’ focused firstly on placing the viewer at the centre of the work and how audiences can be taken on a physical and emotional journey. T

hey documented a journey to the summit of Snowdon – Yr Wydffa (2012) that was filmed with moving camera shots and a point-of- view (POV) style (see Figure 1). Like a theme park ride this was to simulate the experience of a journey. 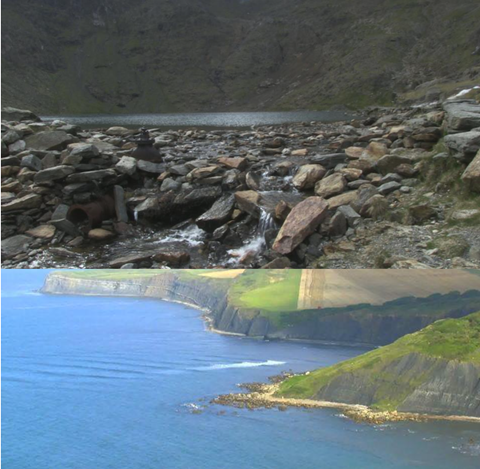 Secondly their investigations made use of 3-dimensional scene volume as a creative tool. Using character theme-based depth they demonstrated how to ‘sculpt in space’ in their documentary Pave The Way (2012) (see Figure 2).