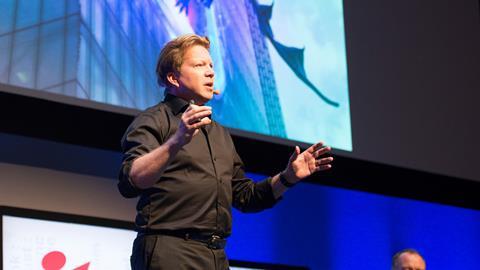 “VR is a long play, invest in it now"

The President of VR app store Viveport urged broadcasters to make an investment in VR or risk missing out on an ecosystem that had the potential to offer audiences a huge array of experiences.

Setting out his pitch to the broadcast industry during a keynote address at IBC2017, Rikard Steiber - who runs the app store built by high-end VR platform HTC Vive - said that the first steps broadcasters needed to take was to try it for themselves.

“It’s such an experiential medium, you can’t intellectualise it. You have to take the red pill and just run with it,” he said.

The next step, according to Steiber, was for content brands to partner with Vive and make VR a reality for the industry.

As a case in point he cited Vive’s partnership with CBS Digital on the second series of its Netflix show, Stranger Things.

The show had experimented with 360-degree video before, but ahead of the second season the shows’ producers invested in a high-end experience on Vive, with monsters slowly creeping towards the viewer in the dark.

According to Steiber, Viveport – which has been described as the ‘Netflix for VR’ - was the perfect platform for content creators to experiment with new content.

“It’s a great way for developers and the media industry to make money and for consumers to discover content,” he said.

“We have 20,000 developers registered and many of these have now decided to exclusively focus on making content for us.”

Steiber added that new AR and VR experiences were just around the corner as the firm worked on developing a new ecosystem.

Haptic suits will also allow users to experience physical feelings so they can feel a physical shot from an arrow and experience different temperatures by simulating hot and cold.

Vive is also experimenting with augmented reality based opportunities, and its first AR toy – a light saber – is being released on the market this Christmas.

Steiber also highlighted the creative steps that third party developers had taken, by showing a demo of an ‘A-HA’ app which takes the famous 1980s pop promo featuring Norwegian rock band A-Ha in which a comic strip character comes to life, and allows users to transpose it into their own backgrounds.

“If VR turning imagination into reality then AR is about doing the opposite, turning your reality into imagination,” he said.

Worldwide revenue for VR-based products (excluding Cardboard) has been forecast at $38bn by 2020 - twenty times what it was in 2016.

Steiber adds that once standalone devices hit the market this number will increase.

But, he warned, VR and AR are long-term investments. Asked by session chair and co-founder of Factory 42 John Cassy whether the company was making any money, Steiber said that Vive was in it for the long haul.

“We’re building an ecosystem. Building out platforms for technology and great content. But you need to invest now to understand it and experiment with it so that you can be part of its future.”