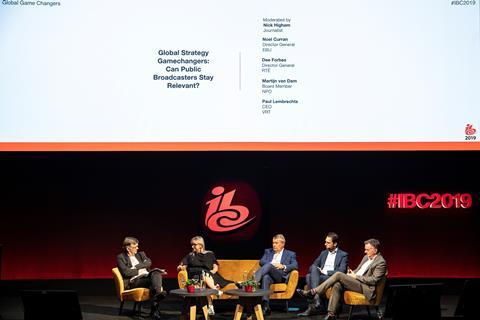 Regulators need to respond faster to changing viewer habits and the rise of the FAANGs, according to European broadcasting chiefs.

“We need to have access to the data social media platforms hold on our output and we need to get to a position where we get due prominence on those platforms,” he said.

Calling for regulators to get tougher on Silicon Valley giants such as Amazon, Apple, Facebook and Google, the EBU head asked: “Why is there no regulation in terms of data? Right now we have an unregulated social media sector, dominated by four or five big companies that have an unprecedented amount of control.”

Paul Lembrechts, chief executive of Belgian public broadcaster VRT, added that if social media platforms continued to deny broadcasters access to data they simply won’t work with them. “It will get to that point,” he admitted, “unless we find out the data they hold on our viewers. Right now we are not operating on a level playing field.”

According to fellow speaker Dee Forbes, director general of RTÉ, the inability of regulators to keep pace with the industry has caused a crisis point for the broadcaster in Ireland. RTÉ is currently running on a deficit and a loophole in the law which means that viewers watching the channel on digital devices do not have to pay a licence fee is partly to blame, according to Forbes.

“We’re led by a Broadcasting Act passed when tablets and mobiles didn’t exist and it’s hindering us in terms of monetising an audience. We’re operating at a crisis level.”

While the Irish government has announced a tender for collection of the licence fee and a move towards an independent device charge, Forbes describes this measure as “not fit for purpose”. She added: “We’re operating on 100m [euros] less than 10 years ago – we would like a quicker reform of the system and a tightening of the law to reflect the viewing habits that are going on right now.”

Lembrechts added that VRT is facing a similar funding crisis – with budgets falling by 25% as they decreased in line with inflation over a 12-year period.

He said: “We are making more media for different platforms but on less money – it’s not sustainable and it’s gradually building a hole.”

In the same session NPO board member Martijn van Dam revealed that the Dutch broadcaster was also facing 10-15% budget cuts, which he described as “disastrous for our task in society”.