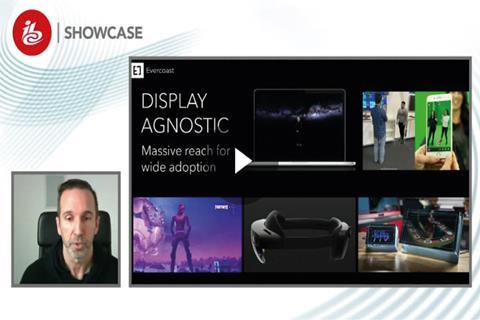 Intel: Led three sessions on day one of IBC SHOWCASE

In the last of three sessions led by chipmaker Intel, speakers from Facebook, Amazon, Netflix, Google, and Tencent – all members of the Alliance for Open Media - predicted widespread deployment of its royalty-free next-gen codec AV1 “within the next couple of years”.

Sheen revealed that its games platform Twitch is looking to stream AV1 to its gaming community in 2K - and is currently trialing the codec format on a UHD 120 frame per second gaming content demo.

Watch the session on-demand here
Intel also led a session looking at volumetric capture. The session, which featured Intel’s Dusty Robbins and Evercoast’s Ben Nunez, looked at a project that sees the two firms working together to deliver a complete Volumetric VOD capture and delivery system that’s accessible at the Edge over 5G on iOS devices with ARKit.

Speaking during Tuesday’s IBC SHOWCASE session, “Volumetric: Capture, Optimise and Stream”, Roberts said that the goal was to “enable end-to-end live and VOD volumetric streaming over today’s and tomorrow’s networks.”

He added that in terms of capture, Intel has been improving its Real Sense Depth cameras, which he promised, would move the camera on from merely capturing content and towards “processing and eventually streaming it.”

With insatiable consumer appetite for live and on-demand video and COVID-19 related explosion in consumption, CDN providers are continuously challenged to keep innovating in optimizing their infrastructure for cost and performance.

Being able to dynamically scale CDN infrastructure to meet unexpected demand is one of such key challenges. The focus of Intel’s other session was to share best practices on how CDNs can be transformed to be more agile to keep up with the pace of content growth. 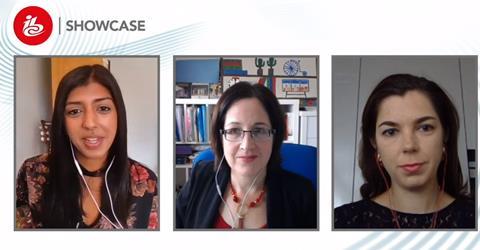 Why are pirates a threat to M&E companies? Because they argghhh
Another key session, currently available on-demand, saw executives from FIFA and Synamedia fire a warning to sports media outfits: Beware of the pirates!

The panel said that pirates are growing in sophistication and becoming smarter. In Tuesday’s IBC Showcase Session Outsmarting the Pirates Synamedia’s security expert Yael Fainaro said the best method for combating pirates was to view them as competitors.

“It’s the most effective way I’ve seen Pay TV clients fight back to ensure people use legitimate services over pirated ones,” she added.

To this end, one of the measures Synamedia has taken is to provide business intelligence on the pirates’ latest modus operandi, so that OTT operators can fight back by offering their best service.

Getting the SHOWCASE into gear
The IBC SHOWCASE itself was kicked off by an IBC Accelerator panel looking at a 5G Remote Production that brings together some of the biggest broadcasters in the world.

Led by the BBC, eleven world leading international broadcasters have been working together to explore the ‘art of the possible’ in terms of 5G capabilities for production today. The team has been designing an early stage proof of concept utilising both public & private 5G network scenarios, researching broadcast use cases and exploring new innovation in areas such as gateway devices and cameras.

It was one of three accelerator sessions on the first day of IBC SHOWCASE, demonstrating some of the most recent innovations in the industry as part of the Accelerator programme.

The others looked at a project that rethinks animation production pipelines with XR Spatial Design and Real-Time virtual production techniques. Content creators from Unity Technologies, Unreal Engine, Cartoon Network and Sky, along with Participants BlueZoo Animation, Aeon Productions and National Film Board of Canada have worked together on the CG Animation Production: New Immersive & Real-Time Workflows project.

This panel was split into two parts – both are available online, along with the 5G production session, on the IBC SHOWCASE Accelerators page, which you can find HERE