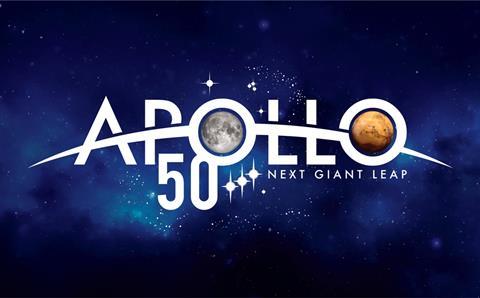 50th anniversary: Week of events to salute the moon landing

NASA will celebrate the 50th anniversary of the Apollo 11 moon landing with a live two-hour TV broadcast looking at the future exploration of the Moon and Mars.

The live TV event Giant Leaps: Past and Future will air at 1pm to 3pm EDT on NASA TV and on the company website on the 19 July.

It will be simulcast on the Discovery Science channel with partner-led events taking place across the US next week.

Hosted from NASA’s Kennedy Space Centre, the show will salute the heroes of Apollo 11 and discuss the agency’s future plans.

In a statement, NASA commemorated the astronauts Neil Armstrong, Buzz Aldrin and Michael Collins who lifted off from Launch Pad 39A at NASA’s Kennedy Space Center in Florida on 16 July 16, 1969 embarking on the journey to the Moon and into history.

Four days later, while Collins orbited the Moon in the command module, Armstrong and Aldrin landed Apollo 11’s lunar module, Eagle, on the Moon’s Sea of Tranquillity, becoming the first humans to set foot on the lunar surface.

Highlights of events in which NASA is participating include:

Apollo 11 astronauts Buzz Aldrin and Michael Collins will reunite at the historic launch pad where Apollo 11 began its mission 50 years ago for a question-and-answer session with Kennedy Center Director Bob Cabana, beginning at 9:15 a.m. EDT, followed by a visit the Launch Control Center and Firing Room 1 to connect with Apollo-era launch controllers and those who will launch the Artemis missions that are part of America’s Moon to Mars approach for human space exploration.

This event will air live on NASA Television and the agency’s website.

At 8:32 a.m. CDT – the same time as the Apollo 11 mission lifted off from Florida 50 years ago – the U.S. Space & Rocket Center, the official visitor centre for NASA’s Marshall Space Flight Center, in Huntsville, Alabama, will host a Guinness Book of World Records attempt for most model rockets launched simultaneously from a single location.

On the same day, the Apollo 50th Global Rocket Launch, a 24-hour challenge, will be held in conjunction with partners launching around the world. Groups may register at: https://rocketcenter.com/apollo50/GlobalLaunch

BBC broadcaster James Burke spoke to IBC365 about the future of TV 50 years after covering the live Apollo 11 moon landing.

The BBC broadcast 27 hours covering the Apollo 11 mission to the moon with presenters Cliff Michelmore, Patrick Moore and James Burke based in the Lime Grove Studios.

Burke was responsible for the scientific and technical discourse and analysis. He explained the hardest part of the live broadcast was knowing when to speak and when “critically not to talk” over the astronauts.